By Brad Friedman from on the road… 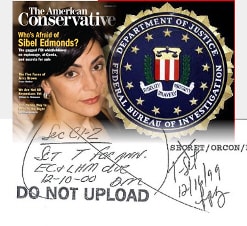 Though there has been worldwide coverage of the recent blockbuster in the Rupert Murdoch-owned British paper, the U.S. media have remained entirely mum, a point which has drawn great consternation from both Edmonds and the 70’s-era “Pentagon Papers” Daniel Ellsberg, whom The BRAD BLOG has spoken to this evening, following the release of tonight’s extraordinary new Times piece.

The paper now reports that they are able to corroborate an apparent FBI cover-up of documents detailing an investigation of the theft and sale of nuclear secrets to agents working for Turkey and Israel, who in turn shared the secrets with Pakistan, who in turn may have shared those secrets with Iran, North Korea, Libya, and possibly even al-Qaeda.

As The BRAD BLOG reported along with the Times two weeks ago, the operation also includes allegations that high-ranking U.S. officials — such as Marc Grossman, a former U.S. Ambassador to Turkey, who served as the #3 official in the State Department under Colin Powell and Richard Armitage from 2001 to 2005 — were involved in the sale of those secrets and may have accepted pay-offs from agents in the black market network in the bargain.

The Times article tonight was originally published under the headline “FBI ‘covers up’ file exposing theft of nuclear secrets,” according to Google News.

Though that header has already been changed to “FBI denies file exposing nuclear secrets theft.” (See visual of this at Brad Blog).

The Times‘ article refers to an FBI case number (203A-WF-210023) referenced in an anonymous letter sent to The Liberty Coalition, a DC-based transpartisan civil and human rights watchdog organization. A subsequent Freedom of Information Act (FOIA) request, asking for information referring to that case number, resulted in a denial from the FBI that such a case exists.

The letter describes, among other things, allegations that Grossman had warned officials at the Turkish embassy in DC of the existence of a CIA counter-proliferation operation using a “CIA cover company” by the name of “Brewster Jennings.” That company was a front used by covert CIA operative Valerie Plame Wilson, who was later outed by White House officials in the now-infamous CIA Leak case.

The BRAD BLOG had obtained a copy of the anonymous letter some weeks ago, along with the FBI’s denial of the existence of related information via the FOIA request. We’ve been in touch with the Sunday Times over the past week, as this story has been developing.

We have yet to publish the letter in full, however, as we have been unable to independently corroborate a number of allegations made in the letter.

The Times, however, reports that they’ve “obtained a document signed by an FBI official showing the existence of the file” referred to in the anonymous letter.

We’ve also just spoken to Edmonds, who has been under an unprecedented 5-year-long gag order by the U.S. Department of Justice. The DoJ has threatened Edmonds with prosecution under the so-called “State Secrets Privilege.” The threat of prison has kept her from speaking publicly about details related to the case, which she claims to have heard while translating wiretaps for the FBI in 2001 and 2002. She has spent many years encouraging members of Congress to hold hearings and a public investigation into the case. Despite public support from senators such as Patrick Leahy (D-VT) and Chuck Grassley (R-IA), and a promise for investigations from members of Rep. Henry Waxman’s (D-CA) office, who have been briefed on the details, no such investigation has been carried out to date.

Edmonds denied being the source for the anonymous letter, telling The BRAD BLOG “absolutely not,” when we asked her directly if she was its author…

THE FBI has been accused of covering up a key case file detailing evidence against corrupt government officials and their dealings with a network stealing nuclear secrets.

The assertion follows allegations made in The Sunday Times two weeks ago by Sibel Edmonds, an FBI whistleblower, who worked on the agency’s investigation of the network.

Edmonds, a 37-year-old former Turkish language translator, listened into hundreds of sensitive intercepted conversations while based at the agency’s Washington field office.

She says the FBI was investigating a Turkish and Israeli-run network that paid high-ranking American officials to steal nuclear weapons secrets. These were then sold on the international black market to countries such as Pakistan and Saudi Arabia.

One of the documents relating to the case was marked 203A-WF-210023. Last week, however, the FBI responded to a freedom of information request for a file of exactly the same number by claiming that it did not exist. But The Sunday Times has obtained a document signed by an FBI official showing the existence of the file.

Edmonds believes the crucial file is being deliberately covered up by the FBI because its contents are explosive. She accuses the agency of an “outright lie”.

“I can tell you that that file and the operations it refers to did exist from 1996 to February 2002. The file refers to the counterintelligence programme that the Department of Justice has declared to be a state secret to protect sensitive diplomatic relations,” she said.

The freedom of information request had not been initiated by Edmonds. It was made quite separately by an American human rights group called the Liberty Coalition, acting on a tip-off it received from an anonymous correspondent.

The letter says: “You may wish to request pertinent audio tapes and documents under FOIA from the Department of Justice, FBI-HQ and the FBI Washington field office.”

It then makes a series of allegations about the contents of the file — many of which corroborate the information that Edmonds later made public.

Edmonds had told this newspaper that members of the Turkish political and diplomatic community in the US had been actively acquiring nuclear secrets. They often acted as a conduit, she said, for Inter-Services Intelligence (ISI), Pakistan’s spy agency, because they attracted less suspicion.

She claimed corrupt government officials helped the network, and venues such as the American-Turkish Council (ATC) in Washington were used as drop-off points.

The anonymous letter names a high-level government official who was allegedly secretly recorded speaking to an official at the Turkish embassy between August and December 2001.

It claims the government official warned a Turkish member of the network that they should not deal with a company called Brewster Jennings because it was a CIA front company investigating the nuclear black market. The official’s warning came two years before Brewster Jennings was publicly outed when one of its staff, Valerie Plame, was revealed to be a CIA agent in a case that became a cause célèbre in the US.

The letter also makes reference to wiretaps of Turkish “targets” talking to ISI intelligence agents at the Pakistani embassy in Washington and recordings of “operatives” at the ATC.

Edmonds is the subject of a number of state secret gags preventing her from talking further about the investigation she witnessed.

“I cannot discuss the details considering the gag orders,” she said, “but I reported all these activities to the US Congress, the inspector general of the justice department and the 9/11 commission. I told them all about what was contained in this case file number, which the FBI is now denying exists.

“This gag was invoked not to protect sensitive diplomatic relations but criminal activities involving US officials who were endangering US national security.”