As of December 3, readers can use this space to post their thoughts about anything on the site. Time permitting, we will sometimes respond. Please, no spam, obscenities, slander or personal attacks – we will edit.
———————-

Marcus Hildrebrandt writes to the Staff of 911Truth.org:
For all of you who have it made up in your minds that September 11th and the death of over 3000 people was just a George Bush conspiracy, you people, or should I say waists of skin, are the most disgusting things I have ever heard of. It is so funny that you people are not even American citizens. You idiots sit in your cushy little armchairs, in your snobbish little houses, somewhere in Europe, because your too worried that if you popped your pointy little heads into the United States of America, you’d get your tiny little snobbish, pompous asses kicked if you even opened your mouth and let any of the crap spill out. How on earth could you people think that this whole thing with the planes crashing into the Pentagon and the World Trade Center (which by the way is just a stones throw away from your beloved United Nations building that just happens to be just as corrupt as you people are), was just a hoax to cover up the 2000 election? I am also just disgusted to hear your people question
whether a plane “actually” crashed into the Pentagon. Where the hell is your brain? Are you seriously that deranged? You question the intentions of a country that in many cases if we hadn’t been around you people would be dead….Say we hadn’t stormed the beaches in Normandy (or was that just hoax also?) you people would be speaking German or thrown into Internment camps and Gassed. What makes you old, pot-head, wine drinking hippies think you have all the answers? What makes you think that you people are so Superior to everyone else? You have no idea what it would be like to have to defend your country because you let everyone else do it for you. It’s soldier who protects the rights of everyone in this country and sometimes the people in other countries. You people don’t do anything for your country or my country but take up space. I pray to GOD for all your souls.
Marcus

Of our editors, Nicholas chooses to reply:
Yo, Hildrebrandt, just speaking for myself…
– We’re Americans;
– We all live here;
– There are thousands of us;
– We have the support of millions – a Zogby poll found that half of New York agree there is a 9/11 cover-up, and if you did the same poll nationwide I bet you’d get at least a quarter of your fellow citizens saying the same – trend going up;
– We have support from many September 11 families;
– Yes, however, we must admit lots of Europeans ARE thinking the same thing while they sit in their cushy armchairs… and Africans and Asians and Latins and Oceanites too;
– We don’t think 9/11 was “a George Bush conspiracy” and you won’t find anything quite so kindergarden on our site, our views are a tad more complex;
– Within this movement we do have a variety of differing views on what happened at the Pentagon, but no consensus;
– It’s hardly necessary to speculate about the Pentagon to make the probable-cause case that elements within the U.S. government were complicit in the 9/11 events;
– And, finally, even if you spotted him 3 miles, McNabb Himself could not throw a stone, not even a pebble, from the World Trade Center to the United Nations, so maybe you should visit New York with a measuring tape, or count the sidewalk squares from Vesey Street to 42nd and York. Just stay civil and polite, and I’m sure there will be no danger of getting your ass kicked when you get here. We’re good people. Other than that, very interesting letter!

My motto for you: Do some research and God will take care of the rest,
Nicholas

Pentagon accounting — Letter to the Editor 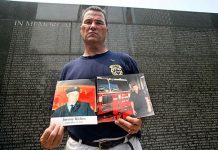 Pentagon accounting — Letter to the Editor