The number of people with medical problems linked to the 9/11 attacks on New York has risen to at least 15,000.

The figure, put together for the BBC, counts those receiving treatment for problems related to breathing in dust.

Many of the victims say the government offered false reassurances that the Manhattan air was safe and are now pursuing a class-action lawsuit.

On Tuesday, a coroner said the death of a policeman who developed a respiratory disease was “directly linked” to 9/11.

James Zadroga – who worked at Ground Zero – died in January. The New Jersey coroner’s ruling was the first of its kind. 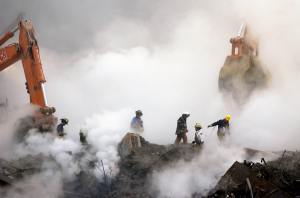 Jeff Endean used to be the macho leader of a police Swat firearms team. Now, he has trouble breathing and survives on the cocktail of drugs he takes every day.

Kelly Colangelo, an IT specialist, used to have good health but now endures a range of problems including asthma and sinus pain.

“It worried me that I’ve been damaging my health just being in my home,” she told the BBC News  website. “It also worries me that I see the health impact on the [the emergency crews at the scene]. We were also exposed and I wonder if in 10-15 years from now, am I going to be another victim?”

Both are victims of what used to be called “World Trade Center cough”, an innocuous sounding condition that many thought would pass once the dust that rose from the attacks of 9/11 had blown away.

But the medical problems have not merely intensified; the list of victims has grown alarmingly at the same time.

The apparent cause? The long line of contaminants carried by the dust into the lungs of many of those at, or near, the scene on that fateful day.

One list of sufferers has been compiled at the Mount Sinai Medical Center. Its World Trade Center Screening Programme has 16,000 people on its books, of whom about half – 8,000 – require treatment.

A further 7,000 firefighters are recorded as having a wide range of medical problems, producing a total of 15,000. But the overall numbers affected could easily be far higher.

As the US government’s newly appointed “health czar” John Howard confirmed to the BBC, there were between 30,000 and 50,000 people at or near Ground Zero who might have been exposed to the hazardous dust and no one really knows how many are suffering problems now.

Consisting of billions of microscopic particles, the dust was especially toxic because of its contents.

A grim list includes lead from 50,000 computers, asbestos from the twin towers’ structures and dangerously high levels of alkalinity from the concrete.

Many of the people now suffering were sent to Ground Zero to help search for survivors. Others volunteered. Still more just happened to be living or working in the area.

In the days following the attacks, the head of the US Environmental Protection Agency (EPA) declared that monitoring operations had proved the “air was safe to breathe”. And with that reassurance, the authorities reopened the globally important financial hub of Wall Street.

At the time it was seen as a critical morale-booster to a wounded nation.

Yet now the federal courts have allowed a class-action lawsuit to be filed against those very authorities.

Last month, a judge described the EPA’s reassurances as “misleading” and “shocking the conscience”. The legal process could last years.

A special report on the dust fallout from the 9/11 attacks will be featured on BBC World starting on Wednesday 3 May at 1930 GMT. The documentary will also be carried on BBC News 24.

NEW YORK – A majority of survivors of the 2001 attacks that destroyed the World Trade Center suffered from respiratory ailments and depression, anxiety and other psychological problems up to three years later, federal health officials said Friday.

The people who escaped from collapsed or damaged buildings on Sept. 11, 2001, were several times as likely to suffer from breathing problems or psychological trauma if they were caught in the cloud of trade center dust and debris that covered lower Manhattan, researchers at the U.S. Centers for Disease Control and Prevention said.

“The trauma of being caught in the cloud itself, the whole experience had an impact on their … psychological health later on,” said Dr. Robert M. Brackbill, a CDC doctor working with the World Trade Center Health Registry, which has been tracking the health of more than 71,000 people who worked at ground zero or were in the area on Sept. 11.

The interviews took place more than two years after the attacks, between Sept. 5, 2003, and Nov. 20, 2004, and did not involve medical examinations. Follow-up surveys are planned this month.

“We are just beginning to learn about the health effects of the worst day in New York City’s history,” said Daniel Slippen, a survivor of the attacks and a member of the registry’s community advisory board. “It is critical to know whether these physical and mental effects will continue, diminish or grow worse over time.”

City officials in charge of the registry say it will likely take 20 years or more to determine whether 9/11 exposure led to increased cancer deaths or illnesses among survivors.

The study said more than six in 10 were caught in the clouds of trade center dust that enveloped the area. Those people were nearly three times as likely to have respiratory problems, 40 percent more likely to experience severe psychological problems and five times more likely to report suffering a stroke, Brackbill said.

More than 56 percent of the survivors said they had new or worsening respiratory ailments, including sinus problems, shortness of breath and a persistent cough. More than 43 percent sustained a physical injury on Sept. 11; the most common were eye injuries.

Almost all of the people studied witnessed at least three events likely to cause psychological trauma, such as the collapse of the towers, the deaths or injuries of others or people jumping from the twin towers, the study said.

More than 64 percent of the survivors said they were depressed, anxious or had other emotional problems, and nearly 11 percent were in severe psychological distress at the time of their interview, the study said.

Copyright 2006 The Associated Press. All rights reserved. This material may not be published, broadcast, rewritten or redistributed.

NEW YORK – The death of a 34-year-old detective who developed respiratory disease after working at ground zero is directly related to the Sept. 11 attacks, a coroner said in the first known ruling that attributes a death to recovery work at the World Trade Center site.

James Zadroga’s family and union released his autopsy results Tuesday, saying they are proof of the first death of a city police officer related to the response effort after the terrorist attacks.

“It is felt with a reasonable degree of medical certainty that the cause of death in this case was directly related to the 9/11 incident,” wrote Gerard Breton, a pathologist at the Ocean County (N.J.) medical examiner’s office.

Zadroga, of Little Egg Harbor, N.J., died in January of respiratory failure and had inflammation in his lung tissue due to “a history of exposure to toxic fumes and dust,” Breton wrote.

The detective spent 470 hours after the attacks sifting through the twin towers’ smoldering ruins, wearing a paper mask for protection. His breathing became labored within weeks; he developed a cough and he had to use an oxygen tank to breathe. He retired on disability in November 2004.

The coroner found material “consistent with dust” in Zadroga’s lungs and damage to his liver and said his heart and spleen were enlarged.

Zadroga’s parents and 4-year-old daughter appeared at a news conference with half a dozen other detectives who said they have suffered from cancer, strokes, lung disease and other ailments because of post-Sept. 11 work at the trade center site.

A class action lawsuit and families of ground zero workers have alleged more than two dozen deaths are related to exposure to trade center dust, which doctors believe contained a number of toxic chemicals including asbestos and more than 1 million tons of tower debris.

“They all knew it was detrimental to their health,” said Joseph Zadroga, the detective’s father. “They all knew that, yet they stayed there.”

Doctors running health screening programs, including a city registry following tens of thousands of people, say it will take decades to assess the health effects of working at the trade center site.

This page contains copyrighted material, the use of which has not always been specifically authorized by the copyright owner. We are making such material available in our efforts to advance understanding of political issues relating to alternative views of the 9/11 events, etc. We believe this constitutes a ‘fair use’ of any such copyrighted material as provided for in section 107 of the US Copyright Law. In accordance with Title 17 U.S.C. Section 107, the material on this site is distributed without profit to those who have expressed a prior interest in receiving the included information for research and educational purposes. For more information go to: http://www.law.cornell.edu/uscode/17/107.shtml. If you wish to use copyrighted material from this site for purposes of your own that go beyond ‘fair use’, you must obtain permission from the copyright owner.