Here is the letter signed by Senator John McCain stating that he does not have time to meet with Blair Gadsby (Hungry4Truth.com).

Members of the 9/11 Truth Movement, this is our “Call-to-Action”. It is time for each of us to organize our materials and schedule time with McCain’s Staff. David Ray Griffin, Richard Gage, Steven Jones, Kevin  Ryan, Robert Balsamo and many others have been our courageous technical leaders. So many others have been diligently researching historical documents like Paul Thompson, Michael Ruppert, Nafeez Ahmed, Michel Chossudovshy, Jim Marrs, Webster Tarpley and many others. Courageous public officials have challenged the status quo and are calling for a new independent investigation including Senator Karen S. Johnson, Rep. Dennis Kucinich, Mike Gravel, Robert Wexler, Yukihisa Fugita, Cynthia McKinney, Max Cleland and many others. Whistleblowers can now be “set free” to contact John McCain directly. Countless others in the Movement are also encouraged to contact John McCain’s Staff. You all get the point. There are thousands and thousands of us with tangible proof that the 9/11 Commission Report is seriously flawed, that the NIST reports are faulty in theories and the Popular Mechanics explanations are despicably misdirecting.

Blair Gadsby has laid the groundwork to get us into the office of John McCain and we must. There is no time to lose.

One more directive for the Chicago, Illinois 9/11 Truth Movement – Now is your time to get into the office of Senator Obama and secure a similar letter to McCain’s. This will confirm that both Presidential candidates are “on record”, open to new information regarding the actual events of September 11, 2001.

Please, calling all 9/11 Truther’s, take up your arms diligently and professionally to secure Staff time with our Senators and present factual evidence and testimony. This is for the victims and families of 9/11 – “We will not fail you”!

Thank you Mr. Blair Gadsby for opening this door and securing documented permission to present the truth. Godspeed to us all. 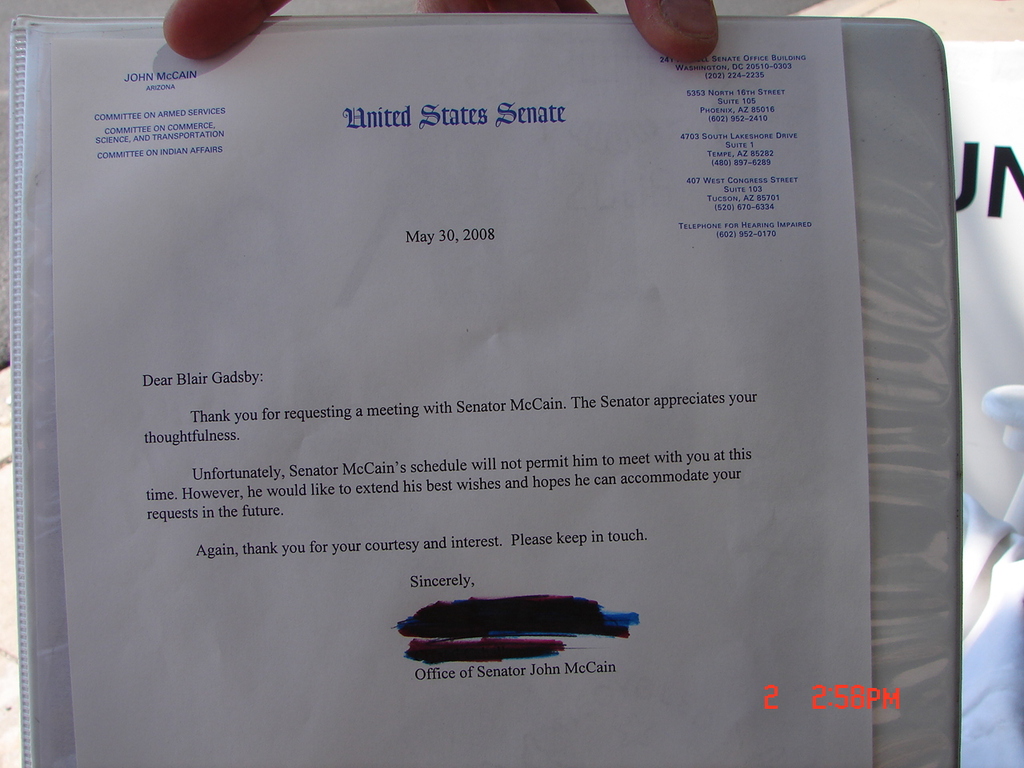 What a ride! The “Hungry for 9/11 Truth” hunger strike has ended and I am on the mend. Time has come to finalize my thoughts on the event and to comment upon what I believe we have accomplished.

As of today, Monday June 16, I have had four full days of recovery and my weight has increased to 136lbs from a low of 124lbs when my fast ended. The first two days of post-fast were rough. I was in no shape to communicate with anyone and I stayed under the constant observation of my dear wife and nurse.

I went to my doctor on Thursday, June 12 and received the results of my lab work, which was obtained on Day 11 of the strike. He was surprised at some of the changes in values since my pre-fast lab work-up, and  confirmed that indeed my body was responding to a lack of nutrition. I will be going in for follow-up labs in another couple of weeks. He warned me of some permanent side effects that could result from the fast, most especially in my kidney and liver functions; however, I am once again feeling very healthy and expect a full recovery.

Let me state that I owe a deep debt of gratitude to all those who stood with me, those near and those far away, through the seventeen days of “camping out” at Senator McCain’s Phoenix office. Special mention needs to be made to three outstanding men: John, Larry, and Rick. These fellows saw to it that I was never alone in my vigil. They each stood-up to the plate and committed themselves to my well-being and safety. Each sat for untallied hours with me, and I could not have asked for better company’you guys are the best!

Second, thanks to Tim and Craig (Phoenix 9/11Truth), who labored in bringing daily updates to the world at www.Hungry4Truth.com ,and to Drew (Tucson 9/11Truth). Thank to the various radio programs who followed my progress from early on, Cosmos Revolution Radio in San Francisco, Mike Rivero of WhatReallyHappened radio program in Hawaii, to name a few, and to the members of 9/11Truth groups
around the country and around the globe who did what they could to get the word out.

Finally, the results. I received a letter in my mailbox on Saturday, June 14, signed by Senator McCain stating that he does not have time for a direct meeting with us due to his current schedule. Nevertheless, he states in his letter’ ‘My staff and I are always open to new, scientifically substantiated information that helps explain how and why the tragedies of September 11th occurred. I welcome any additional new information you may wish to present on the subject and will make my staff available to listen to your concerns.’

I believe we can take this as a call to action!

We now have confirmation that one of the highest officials in our government knows about 9/11 Truth material, has it in his possession, but is not yet willing and/or able to discuss it with us. This is certainly no time to give up.

Thank you everyone. I am ready to get back into the fray and to ASK QUESTIONS, and DEMAND ANSWERS!

More photo can be seen at http://s293.photobucket.com/albums/mm78/WeAreChangeAZ/

June 14, 2008 — Day 17 of Blair’s hunger strike for 9/11 Truth came and went with dozens of citizens stopping by to give Blair their thanks and appreciation for a selfless act dedicated to the Truth about 9/11. Mike Rivero of Whatreallyhappened.com and Jeff Farias from Nova M radio interviewed Blair and Senator Johnson today. Blair decided Day 17 would be his last day fasting for truth. His weight has dropped to 124 lbs from a normal of 155 lbs. Given the amount of press coverage, good or bad, generated from his hunger strike, the fantastic speech by Senator Johnson on the floor of the Arizona Senate and the apparent lack of concern by Senator McCain. Blair has decided that 17 days was enough. What better day than the 11th of the month? He has asked the staff of Senator McCain to forward any response from him to Blair’s home address.
What started out as an individual, sitting in a lawn chair, seeking a response from his elected representative in Washington D.C. ended with a positive response, not from the elected senator and not just from people in Phoenix, but from all over the world. People everywhere are hungry for the truth, and they are tired of being lied to. Email came from all over the country and globe. The people know about 9/11. The spell is wearing off. We may still be a silent majority, but we know. If anything is learned from this, it is the historical fact that one individual can make a difference and a contribution to better their city, their state and their world. Don’t let anyone tell you differently. In my opinion Blair Gadsby has solidified that notion and he raised the bar a little in the process.

In the next few days Blair would like to issue a statement and as soon as he is ready we will post his words, and or video, here on 911 Blogger. Many thanks for everyone’s support in this effort. Stay Hungry.