Home In the Media Motassadeq convicted of being Atta’s friend

The "War on Terror" was launched because the "Pearl Harbor of
the 21st century happened today." That is what the White House tells us
George W. Bush wrote in his diary on the evening of September 11, 2001. However,
the "War on Terror" has now lasted longer than the United
States’ involvement in the Second World War, and there is no end in sight.

As everyone knows, Osama Bin Ladin is still on the loose. Or is it his
double?

How serious is the US government about neutralizing or prosecuting the people
it says were responsible for 9/11?

What is the US government’s evidence for its version of what really happened
on September 11th, 2001?

The Motassadeq case raises these questions, but it is useful first to recall
a few past examples:

Several of Bin Ladin’s brothers and relatives were in the United States on
September 11th. They were spared the indignity of having the FBI question them
about his possible location or plans. Instead, they and dozens of other
high-status Saudis were immediately flown to big cities and allowed to leave for Saudi Arabia
on
special flights, starting in the days when the general "no fly" order
still applied to all other travelers.

In November 2001, the Pentagon ordered an air corridor cleared so that Bin
Ladin’s comrades-in-arms could
escape a siege at Kunduz. Pakistani intelligence agents and al-Qaeda operatives
were allowed to fly to Pakistan, as Seymour
Hersh reported soon after, citing military sources who were unhappy with the
policy.

Earlier this month, a CIA field commander during the Afghanistan offensive of
October-November 2001 told
Newsweek that the Pentagon refused to close off the escape
routes out of a besieged position
at Tora Bora, although the CIA was certain that Bin Laden was hiding there.

The US corporate media tends to depict these curious actions as matters of
incompetence, if they report on them at all. (Apologists for the official story
do sometimes point to the Bush-Bin Ladin family
business connections as a possible reason for allowing the Bin Ladin
brothers to leave the country without questioning.)

But after stepping down earlier this year, the number-three man at the CIA,
AB "Buzzy" Krongard, may have let the cat out of the bag. He offered a
rationale for why it would be better for Bin
Ladin to remain free. Was this the policy of the CIA during his tenure?

Krongard’s statement becomes even more interesting when we recall that he was
previously the head of AB Brown, the bank that brokered many of the suspicious
stock transactions indicating foreknowledge of the Sept. 11th attacks. Does
Krongard have a personal reason to prefer that Bin Laden remains uncaptured?

The German case against alleged "Hamburg cell" member Mounir
Motassadeq fits the pattern. His was first convicted in 2003, as an
accomplice to nearly 3,000 murders on 9/11/01. The conviction was overturned
because the
United States government had refused to cooperate with the German court in
establishing Motassedeq’s guilt.

Citing reasons of national security, the US denied access to documents and
refused German requests to question the alleged masterminds
of 9/11, Khalid
Sheikh Mohammed and Ramzi Binalshibh. These two men are said to have been
captured in Pakistan (Binalshibh in Sept. 2002, "KSM" in March 2003).
The US government says it is holding them in undisclosed locations as "enemy
combatants."

Their purported interrogations by the FBI make up a large part
of the official story of September 11th as told in The 9/11 Commission Report.
But no one from the 9/11 Commission or its staff ever got to question either of them in person.

The government has refused to say whether it will ever present either of them
for prosecution as the masterminds of 9/11.

Was "KSM" really captured in March 2003? Are he and Binalshibh
really in US custody? Or was KSM killed
in a Sept. 2002 shootout in Karachi, as the Pakistani press reported at
the time?

As with most other aspects of the official conspiracy theory, the US government’s word is
supposed to stand in for actual evidence.

In the second Motassadeq trial, the German government gave up on trying to
gain cooperation from US authorities. Motassedeq was once again acquitted as an
accomplice to the murders of September 11th. The court instead convicted him for
consorting with Mohamed Atta and other
purported "Hamburg Cell" members, taking as gospel that
these were the ringleaders who carried out the 9/11 plot almost entirely by
themselves.

The following was published Saturday, August 20, 2005 by washingtonpost.com

Friend of 9/11 Hijackers Convicted in Germany

BERLIN, Aug. 19 — A German court on Friday convicted a Moroccan man and sentenced him to seven years in prison as a member of the Hamburg cell that planned the Sept. 11, 2001, attacks on the World Trade Center and the Pentagon.

But the court found Mounir Motassadeq, 31, not guilty of more than 3,000 counts of accessory to murder in the attack, ruling that he did not play a direct role in the plot. 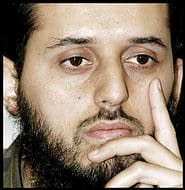 Mounir Motassadeq was acquitted of helping to plan the 9/11 attacks.

The judge overseeing the Motassadeq retrial, Ernst-Rainer Schudt, criticized the U.S. government for refusing to allow the court to interview or have access to several captured al Qaeda leaders who could have shed light on the inner workings of the Hamburg cell. He also accused U.S. authorities of stonewalling requests for information and of being uncooperative during the trial.

“The point is, we would have liked to have questioned them ourselves,” Schudt said of the imprisoned al Qaeda leaders.

The U.S. Justice Department provided the German court with written summaries of interrogations of some al Qaeda leaders, including chief plotters Ramzi Binalshibh and Khalid Sheik Mohammed.
But U.S. officials said it would pose a risk to national security to allow the captives, who are being held at undisclosed locations, to be cross-examined or questioned in greater detail.

German government officials, who have faced criticism for their inability to win convictions in other terrorism cases, praised the verdict. “A clear signal has been sent of the determination of the state in the fight against terrorism,” Interior Minister Otto Schily said in a statement.

At his first trial in 2003, Motassadeq was convicted of all the charges and sentenced to 15 years in prison, the maximum punishment in Germany. But an appellate court overturned the verdict, and prosecutors feared they would have trouble winning the case the second time around.

Motassadeq, who moved to Hamburg in the mid 1990s and became close friends with lead hijacker Mohamed Atta and other ringleaders of the attacks, spent about 2 1/2 years in prison between his November 2001 arrest and his release in April 2004. He was taken into custody again on Friday to begin serving his sentence. Prosecutors and defense lawyers said they would appeal the decision, which came at the end of a year-long retrial.

The Motassadeq case underlines the difficulties the United States and its allies have faced in trying to win convictions against those suspected of helping carry out the Sept. 11 attacks. Zacarias Moussaoui, a French citizen of Moroccan descent, pleaded guilty in U.S. federal court in April to conspiracy charges related to the hijacking plot, although his exact role remains unclear. Three accused members of al Qaeda are on trial in Spain on charges that they assisted the hijackers. A verdict in that case is expected next month.

According to testimony during the retrial, Motassadeq helped conceal the whereabouts of two of the Sept. 11 hijackers after they left for the United States, paying their rent and performing other tasks on their behalf. He also traveled to Afghanistan with other members of the Hamburg cell to receive military training and meet al Qaeda leaders, witnesses said.

Prosecutors, however, were unable to prove that Motassadeq had concrete knowledge of the hijacking plot. “The clear picture shows the defendant as a member of a terrorist organization, but not as an accessory to murder,” Schudt said.

Dominic Puopolo Jr., a Miami Beach computer consultant whose mother was a passenger on one of the airplanes that the hijackers crashed into the World Trade Center, said he was pleased with the Hamburg court’s ruling. “I’m amazed,” he said, admitting that he feared Motassadeq might walk free. “I’m just filled with joy.”

But Puopolo, who moved to Hamburg for several months to attend most of the trial, said his mood was bittersweet. A few hours after he learned of Motassadeq’s conviction, he said he received word that he had been denied financial assistance from a Massachusetts charity set up to help family members of Sept. 11 victims.

In a telephone interview, Puopolo said the Massachusetts 9/11 Fund Inc., a non-profit group, denied his application for $9,181 in benefits. He said he had received about $200,000 from the national 9/11 Victim Compensation Fund, but used most of that to quit his job and move to Hamburg to monitor the trial.

“Here is a day where I believe I did my best to help put a man in jail,” said Puopolo, a part-time Massachusetts resident. “But now I feel beaten, actually.”

This page contains copyrighted material the use of which has not always been specifically authorized by the copyright owner. We are making such material available in our efforts to advance understanding of
political issues relating to alternative views of the 9/11 events, etc. We believe this constitutes a ‘fair use’ of any such copyrighted material as provided for in section 107 of the US Copyright Law. In accordance with Title 17 U.S.C. Section 107, the material on this site is distributed without profit to those who have expressed a prior interest in receiving the included information for research and educational purposes. For more information go to: http://www.law.cornell.edu/uscode/17/107.shtml. If you wish to use copyrighted material from this site for purposes of your own that go beyond ‘fair use’, you must obtain permission from the copyright owner.