AS 10TH ANNIVERSARY APPROACHES, NEW BOOK CHALLENGES OFFICIAL STORY OF 9/11
(Newark, California August 11, 2011). Years after most of us thought the Crime of the Century was solved, additional evidence demands a closer look.

While next month ‘s commemorations in New York, San Francisco and other cities are affirming the official narrative for the 9/11 tragedy, MOUNTING EVIDENCE shows how it doesn’t square with information now available. In each of the key areas — the shifting stories, the remarkable intelligence lapses, the stunning air defense failures, the unprecedented fall of the World Trade Center buildings — the government explanations conflict with what is known today. 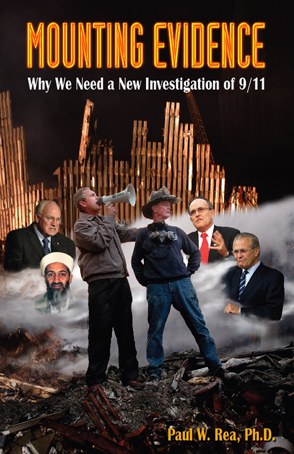 There’s little doubt the tragic attacks on 9/11 quickly became the defining events of our time, shaping much of what has followed. But if Americans don’t understand the past, are they ready to face an uncertain future? In MOUNTING EVIDENCE, Dr. Rea shows that by understanding the shattering events of that dark day, Americans can help to end seemingly endless wars, take back their lost personal liberties, and restore their democracy.

While other researchers have written about 9/11, this fact-based volume is the first comprehensive treatment of the many different angles. It connects the dots to reveal disturbing patterns concerning the intelligence failures, the hijackers’ backgrounds, and the role of the Saudi funders.

Presented in a lively, accessible way, Dr. Rea ‘s findings call out for a new investigation. Former US Senator Mike Gravel, who is already organizing ballot referenda in several states for this exact purpose, has strongly endorsed this book: “In one volume, MOUNTING EVIDENCE provides the most important research accumulated over many years that calls into question the government’s account of 9/11.”

ABOUT THE BOOK Mounting Evidence: Why We Need a New Investigation into 9/11 . Late August 2011. 560 pp. $22 paperback, iUniverse, Inc. Look inside at: www.mountingevidence.org