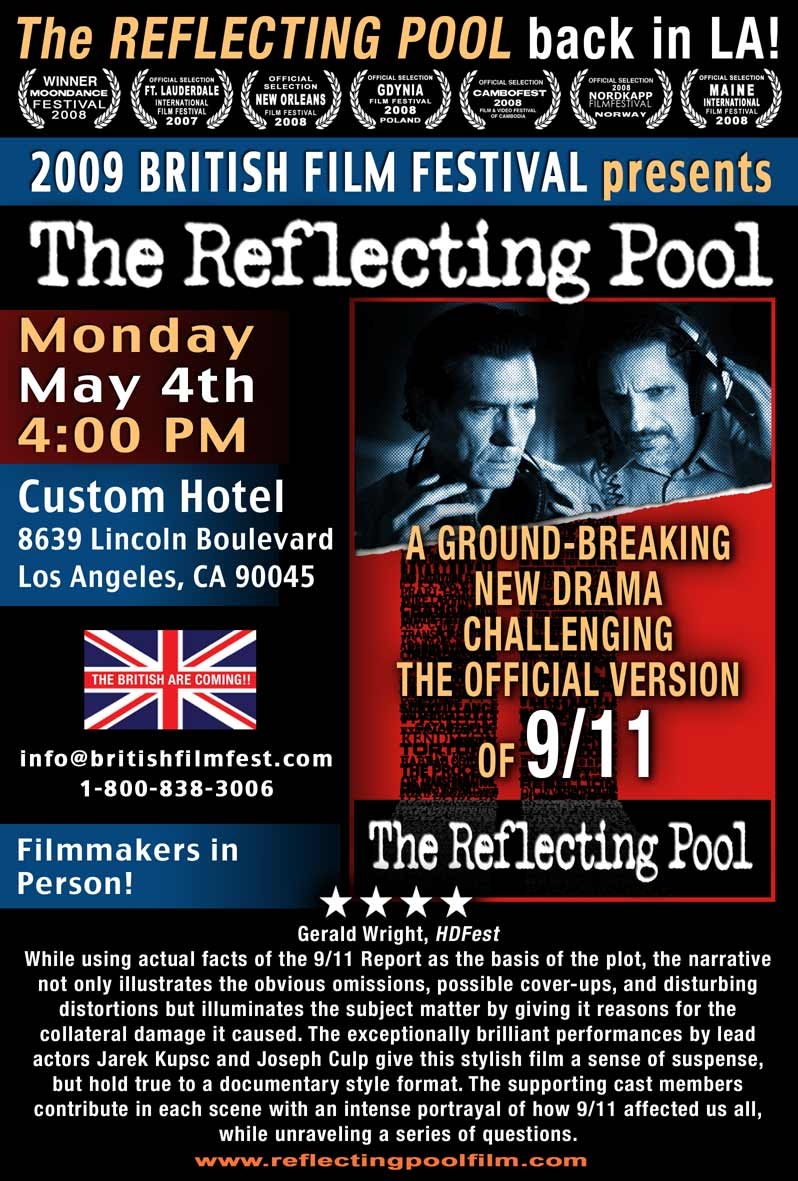 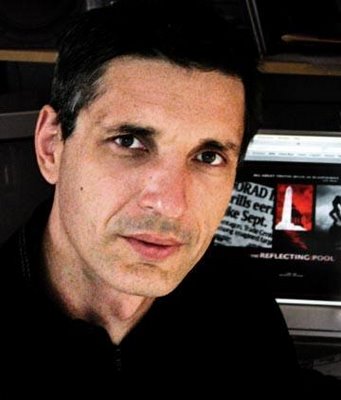 “For
anybody born and raised
behind the Iron Curtain,
it wasn’t difficult to realize
what you were getting from
the television, newspapers
and the media did not exist
outside your house,” Kupsc says.
__________
“People developed other ways
to find what was going on.”

Born in Warsaw, Poland, Jarek has been involved in independent film production
since 1983.

He studied art and history in his native Warsaw, Poland, learned Byzantine
Icon painting techniques in Greece, and received his B.A. in Film Writing/Directing
from San Francisco State University.

He authored and illustrated “The History of Cinema for Beginners,”
a comic film history textbook (Writers&Readers, New York/London, 1998).

As a writer/director/producer, Jarek completed numerous short films, including
the Rosebud Award-winning “Dog.”

He is the writer/director of the 9/11 film “The Reflecting Pool.”

“For anybody born and raised behind the Iron Curtain, it wasn’t
difficult to realize what you were getting from the television, newspapers and
the media did not exist outside your house,” Kupsc says.

“People developed other ways to find what was going on.”

To win something be the last person to correctly answer the following.

Jarek Kupsc would rather be ….

NAD: Jarek, hello, thank you for taking the time for this.
What do you think of the press in the United States?

It’s a perfect union, from the corporatocratic perspective.

I don’t read anything in print anymore, except Rock Creek Free Press.

I get my information from a wide variety of websites, which I cross-reference
obsessively to make sure the facts hold up.

Sometimes I consult www.whitehouse.gov, verifying the insidious laws and orders
they keep passing and publishing on their website for the world to see, without
any apparent interest from the corporate media.

JK: I made a political film, alright.

I tried to make an honest film about an event that shaped our lives in this
century, and is likely to influence the next several generations.

Dealing with 9/11 in an open forum is nearly impossible in the U.S.

You can do it under the radar, as most political films are being produced.

But if you want to do a mainstream, populist film, you have to follow the official
line, say, like “United 93,” for example.

So, propaganda is being awarded, while honesty is relegated to the underground.

Of all the documentaries made on the subject, none has received theatrical
release.

Those movies, including ours, which is a narrative, were made with little money
fronted by the filmmakers themselves, so it’s a losing proposition, financially
speaking.

Of course, nobody who is interested in truth is trying to get rich.

In fact, the search for truth is the easiest way into bankruptcy. I guess,
that’s democracy for you.

NAD: Why don’t they get into the Cineplex 34? Not good
enough?

“The Reflecting Pool” has won some nice awards, but all big festivals
have turned it down, except one in Poland.

We cannot find a distributor to open the movie in theaters.

We had to rent our own theaters to show the film in NY City, and other places.

Same goes for the DVD, which we are self-distributing with some success.

Without any push from some established critics or an honest distributor any
movie dealing with an uneasy topic is bound for relative obscurity.

Luckily, the Internet helps, as it propelled “Loose Change” to great
notoriety.

The press is not helping much, refusing to give these movies good reviews or
at least talk about the subject matter without any bias.

Blogs and independent news sites help, but it is still not nearly enough to
reach the Bible Belt and beyond.

NAD: The Reflecting Pool. What caused you to want to make
it? Any idea how many people have seen it? Did it change anything?

JK: I made “The Reflecting Pool” because someone
had to.

At the time, it was the first investigative drama about 9/11 told from an honest
perspective.

I was angry at the success of corporate media with propagandizing the official
lies.

From that angle, our movie is about the pursuit of truth and the cost one must
pay for it in today’s America.

On the seventh anniversary of 9/11, I decided to post the movie for free on
Google Video, and we’ve gotten close to 10,000 hits so far.

Since we opened the movie in February 2008, in theaters and screening rooms,
we reached about 2,000 people, plus another 4,000 with the DVD.

I’ve been very encouraged by the reception we’ve been getting.

Even though we are mostly preaching to the choir, still, the audiences are
uniformly grateful a movie like that was made.

Unlike documentaries, “The Reflecting Pool” engages you emotionally
as you follow the development of two main characters and share in on their struggle
to overcome these insurmountable odds while dealing with 9/11.

I appreciate how our audiences get involved on a visceral level with the story.

I think the movie gives people the permission to experience these very uncomfortable
emotions and thoughts: how the government is lying to you, how the media is
providing a channel for the lies, and how the industrial/congressional/military
complex is truly getting away with murder.

You don’t get that from cable TV or satellite radio.

NAD: Would you like to choose one of these to answer,
elaborate on? We don’t ask this to make fun. We ask because we really
seek the answers.

JK: I’m trying to narrow my research and interests to strictly
terrestrial affairs. Having said that, I think the movie “Capricorn One”
is terrific.

–Did Bush knock down the towers?

JK: I didn’t see him there with a sledge-hammer, so I’m not
sure.

What I’m sure of, most of his cabinet members were directly responsible for
providing security to this country, and were in the position to prevent the
attacks.

I firmly believe their failure to act and prevent the attacks is a clear indication
they have masterminded the September 11th events.

It testifies to their complicity in confusing the Air Defense, and the reluctance
to act on multiple warnings. The money trail between Pakistani intelligence,
ISI, and Atta, as well as the fact the alleged terrorists received training
on secure U.S. military bases, and at a flight school connected with Jeb Bush,
all point to the Made It Happen On Purpose scenario.

The list goes on and on. By contrast, there is zero evidence suggesting the
attack was perpetrated by 19 hijackers with box cutters. Unless, of course,
you believe in the intact terrorist’s passport found in the WTC debris, where
one-third of the human remains could not even be identified.

And did I mention Building Seven and Mr. Larry Silverstein?

–Was Paul Wellstone’s death an accident?

JK: Of course it was an accident.

Are you trying to suggest we have some renegade assassination squad going around
the country, taking out people whose testimonies could topple our government?

— The Oklahoma City bombing? Wasn’t that just another U.S. government
terrorist exercise? Or not.

JK: All there is to know about Oklahoma City, is that the
investigators found a second, unexploded bomb, and possibly a third explosive
device in the debris.

Now, how this could be done by Mr McVeigh, I don’t know.

Apparently, neither does the government, because the live TV reports on the
other bombs in the building were broadcast only on local networks, and censored
from reaching the rest of the country.

So, as far as America is concerned, a maniac with a bunch of fertilizer took
out the Murrah building.

Scientifically speaking, I subscribe the the expert opinion that such tremendous
damage to the building could not have been caused by that type of an explosive.

Also, I can’t stop thinking about Controlled Demolition, Inc., being involved
in the cleanup of both, Oklahoma City and WTC.

–Waco. We burned kids, right? You can see flames shooting out of the
tanks. Or not.

JK: Waco, what can I say? When you have a woman Attorney General
who looks and acts like a man, bad things happen. I wish women politicos would
act more like women instead of imitating the alpha-male archetype. We would
have less problems all around.

JK: Great question as a follow up to Waco, Mike. Next time
I’m in the Himalayas, I’ll check on that for you.

NAD: Is there a God?

JK: Can’t help you there. I think we should look into ourselves
for answers to our problems. Too many people relegate that duty to some other
entities, and the result is the mess we’re in.

NAD: What makes you think that?

NAD: Do you have hope in Obama? Why? Why not? Do you care
about Obama? What should Americans be caring about, knowing about, that we don’t
know about or care about right now?

JK: I have no hope whatsoever in Obama.

I don’t trust 95 percent of the people he’s surrounded himself with. I think
Obama is less transparent than Bush, more intelligent, and therefore much, much
more dangerous.

Besides, anybody who wins an election because of a Soviet-style propaganda
poster is suspicious to me.

I hope I’m wrong, but somehow I don’t see Obama pulling a JFK while in office.

Americans should study very carefully what every member of the Obama Administration
represents.

And then, take to the streets.

NAD: Does your favorite coffee cup have words on it? What
are they?

It’s in Czech, and I’m Polish, but I like the Czechs. I think they’re smart
and charming, which is a great combination.

NAD: What did you absolutely have to get done by noon
today?

JK: This interview. But it’s already past 1pm, so I’m late.

JK: Pay back all the debts I incurred while trying to tell
the truth with “The Reflecting Pool,” so I can get the IRS off my
back.

NAD: What else would you like to add? What else should
I have asked?

JK: You did a good job. I would like to add something positive
at the end, but I’m out of material at the moment.

JK: Please support our movie – get your blissful friends a \r\n copy at:
\r\n www.reflectingpoolfilm.com