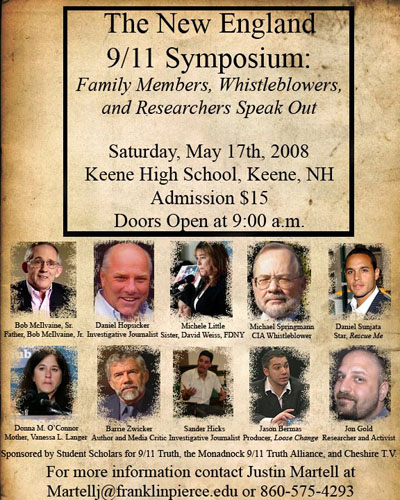 Get the New England 9/11 Symposium
on C-SPAN by calling and faxing them and asking them to cover this historic event.

Put one of these banners (found at end of linked page) at your own site, or in your emails, to let others know about this campaign.

What is this symposium about?

Hundreds of credible, credentialed scientists, architects, engineers, scholars, and former military and government officials are now on record criticizing the official 9/11 report, asking for answers to many troubling questions, and urging a new, independent investigation. (See PatriotsQuestion911.org). The mainstream media have consistently ignored this criticism, even though recent Zogby International polls have shown that a majority of the public is not satisfied with the 9/11 Commission’s report.

Even the Chair and Vice Chair of the 9/11 Commission, Thomas Kean and Lee Hamilton, in a letter to the NY Times titled Stonewalled by the C.I.A.(1/2/08), charge that their investigation was obstructed.

Family members of 9/11 victims and all U.S. citizens deserve truthful answers. That’s why Student Scholars for 9/11 Truth and the Monadnock 9/11 Truth Alliance have invited a distinguished panel of researchers and family members of victims to speak at Keene High School on Saturday May 17. The symposium is co-sponsored by Cheshire TV.

Michael Springmann is a government whistleblower who, while working for the state department, was the head US consular official in the CIA controlled U.S. consulate in Jeddah, Saudi Arabia, from 1987-1989. This is where 11 of the 19 hijackers came through. Springmann would later report that he was forced by his superiors to issue visas for individuals traveling the the U.S. that he suspected were terrorists. Springmann later uncovered that these individuals were being trained in the U.S. and sent back to Afghanistan to fight the Russians. This of course begs the question of just how involved was the CIA in the creation of what became Al-Qaeda.

Bob McIlvaine, Sr. – McIlvaine lost his son, Bobby McIlvaine, Jr., on 9/11. Mr. McIlvaine attended every 9/11 Commission hearing and has been a vocal critic of the official account of 9/11. As a member of September Eleventh Families for Peaceful Tomorrows, McIlvaine has traveled all over the world speaking about 9/11, his perspective on the events of that day, and demanding justice for his son and the other innocents who perished along with him.