On May 20, 2009, four men from the impoverished and largely African-American city of Newburgh, NY, were apprehended for an alleged terror plot. They had no history of violence or terrorist ties, but had been drawn by a Pakistani FBI informant into a carefully orchestrated scheme to bomb Jewish synagogues in a wealthy New York City suburb and fire Stinger missiles at U.S. military supply planes. Their dramatic arrest, complete with armored cars, a SWAT team and FBI aircraft, played out under the gaze of major TV outlets, ultimately resulting in 25-year prison sentences for the “Newburgh Four.”

Amidst the media frenzy surrounding the case, political figures extolled the outcome as a victory in the “war on terror” and a “textbook example of how a major investigation should be conducted,” though others believed the four men were victims of FBI entrapment. THE NEWBURGH STING delves deeply into this case — one of many cases across the country where people have been allegedly drawn into a plot with extreme consequences. 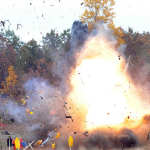 The Imam and assistant Imam of Mesjid al-Ikhlas, Newburgh mosque, recall their first encounters with Shahed Hussain – an undercover informant sent to Newburgh by the FBI in 2008 on a mission to find domestic terrorists. Representing himself as a businessman, Hussain drove expensive cars and made inflammatory statements about 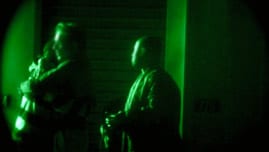 women and jihad. Suspicious, the Imams told a few of their congregants to stay away from Hussain, but one man, James Cromitie, bought into his story. Cromitie, a low-level drug dealer who worked the night shift at the local Walmart, was attracted to Hussain’s apparent wealth, and the two struck up a friendship. As seen in hidden-camera footage, Cromitie tried to impress Hussain by telling him that he had been to Pakistan, even though he hadn’t, and bragged about crimes he hadn’t committed, while Hussain claimed to be connected with the known terrorist network Jaish e-Mohammad. The two had casual conversations about their hatred of the West and Hussain prompted Cromitie into discussions about potential targets in the area. Hussain also urged Cromitie to recruit more people  insisting that they be “good Muslim brothers.” 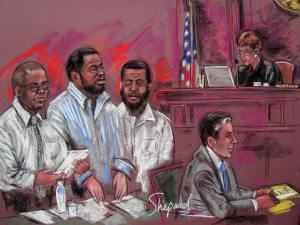 After avoiding Hussain for a time in early 2009, the promise of a $250,000 payout convinced Cromitie to recruit three men — David Williams, Onta Williams and Laguerre Payen — to execute the terrorist plan. David’s mother, Liz McWilliams, lovingly shows pictures of her son when he was a baby; his aunt, Alicia McWilliams, says that he was a good child but got involved in selling drugs and spent time in jail. Ready to turn his life around, David had recently enrolled in college, but his younger brother Lord became ill and needed an expensive operation. Onta Williams (no relation to David) had also spent time in prison, but was considered someone to look up to in the neighborhood by his friends, and was working in a factory. Payen, an immigrant from Haiti, was destitute; he was living in a one-room apartment and was considered intellectually and emotionally “slow.” No one who knew the men recalled ever hearing them talk about jihad or hatred of America.

Surveillance footage shows the men going over the plan, saying it would be carried out at night when no one would get hurt. On May 20, Hussain drove the men to Riverdale, where they placed two bombs in cars outside a synagogue. The FBI was waiting with 100 officers and bomb squads, even though the bombs were fake and the Stinger disabled — all supplied by the FBI. Defense lawyers built a case around entrapment and Hussain, a nebulous character who was paid $66,000 by the government, was the prosecution’s only witness. Lawyers, friends and family of the defendants assert that the men did not intend to go through with the plot — they hoped instead to con the conman. “They certainly weren’t terrorists,” concludes Mike German, a former FBI undercover agent. “This government operation over the course of the year was specifically designed to turn them into terrorists.” Yet the images of the men handling what they thought were live weapons was too persuasive for the jury; they were found guilty and received mandatory sentences of 25 years in maximum-security prison. David Williams’ family was devastated, as were the Imams of Mesjid al-Ikhlas, who felt their mosque was wrongfully associated with terrorism. (Only Cromitie had ever been to the Mesjid al-Ikhlas, and only a few times). The Newburgh Four lost on appeal. They are taking their case to the United States Supreme Court.