Former C.I.A., F.B.I., members of the House and Senate, a State Governor, Parliament Member, and others converge; with the people, with you, to discuss the fallacies of the official 9/11 report, and the post 9/11 world.

This year in NYC, whistle blowers from all levels of government agencies, politicians, filmmakers, activists and journalists will unite with hundreds of others to raise awareness to the plight of the 9/11 First Responders by holding a Charity conference over the course of four days.

The events of 9/11 changed all of our lives. From foreign and domestic policy to new security measures, America has not been the same since that fateful day. “Our Lives Post 9/11” is a four day conference where people will come together to share ideas, raise money and awareness and work toward a better future.

“Our Lives Post 9/11” will feature a lineup of speakers spanning from government officials, whistle blowers, political scholars, 9/11 family members, and more to discuss the criminal negligence of the American Government leading up to and following 9/11.

Events start at 4pm on Thursday 9/9/2010 and continue through Sunday 9/12/2010. Every day there will be street actions, speakers, networking and amazing moments shared by individuals who truly care for one another.

This is always a very emotional event for all those who attend. We hope you can join us to commemorate those who lost their lives on 9/11/01 and aid those who continue to suffer.

Tickets are $20 and can be purchased online. All profits from the conference will be donated to 911 Health Now, an official 501c3 organization dedicated to helping sick and dying 911 First Responders. This year’s fundraiser will be one of the largest 9/11 anniversary fund drives to date — if you can’t make it to New York, we ask that you please donate online.

Visit us online at http://wearechange.org/91110/ for the complete event details or to purchase your tickets. We urge everyone who plans on attending to buy tickets in advance; we are expecting a HUGE turnout this year and want to be sure we get a big enough venue. Purchasing tickets in advance will help us gauge what size venue is needed. Tickets will be sold at the door, but due to NYC fire regulations, we will not be able to sell tickets once we have reached maximum occupancy.

“Our Lives Post 9/11? is being organized by WeAreChange and INN World Report whose mission is not only to raise money for sick and dying 911 1st responders but to educate and motivate, inspire and unite, for liberty and love to reign!

Please help us promote this event by emailing links and details to all your friends, sending out facebook posts and putting the banner on your website. The more we get the word out, we not only promote 9/11 truth but help the lives of our 9/11 first responders. 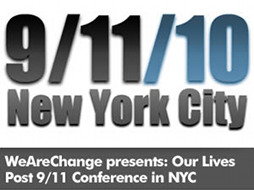