The official US government report on the attacks of September 11, 2001, has altered and obscured the testimony of US Secretary of Transportation Norman Mineta in a manner which absolves former Vice President Dick Cheney of failing to defend the Pentagon.

Mineta’s testimony suggested that Cheney had a clear window of opportunity during which he was made aware that an aircraft was headed straight for either the White House or the Pentagon, after it was clear that the nation was under attack, when he could have given an order and brought the plane down before it hit the Pentagon. The targeting of national landmarks such as the Twin Towers and the Pentagon was in integral part of the attackers’ strategy.

The 9/11 Commission report was drafted by The National Commission on Terrorist Attacks Upon the United States. 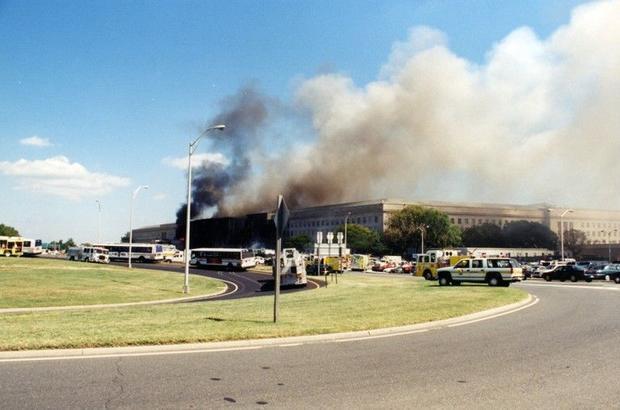 In an interview given after 9/11, President George W. Bush confirmed that he had given the order to shoot down any “commercial aircraft that did not respond” to requests for identification only after “the third plane had hit the Pentagon,” which was at 9:37a.m. Bush said that this was the “first decision” he made on Air Force One after the full extent of the attacks became apparent.

Norman Mineta testified before the 9/11 Commission that, in the command bunker known as the Presidential Emergency Operations Center, hijacked American Airlines Flight 77 was being tracked on radar as it approached the Pentagon, between 9:26a.m. and 9:37, and a junior officer kept asking Cheney if the order regarding the shooting down of unresponsive aircraft was still in effect. Bush’s authorization after the Pentagon was hit implies that before this, there was no standing order to shoot down possibly hostile aircraft.

The standing order would therefore have been not to shoot.

In answer Cheney replied in the negative, that the standing order should not be reversed.

In the official transcript of Mineta’s testimony before the Commission, Mineta says:

But in on page 41 of the 9/11 Commission Report, in the chapter “We Have Some Planes,” the Commission clearly echoes what is meant to be Mineta’s testimony, while changing the most critical aspects of it. Mineta’s actual testimony never appears in the report, although a pale shadow of it remains, with the clearly deceptive intent of placing Cheney in the command bunker, and watching the radar, only after the Pentagon had been hit. The Commission writes: 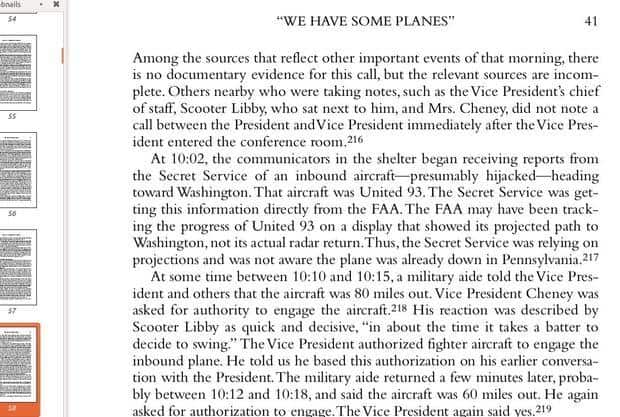 Although Mineta’s testimony is taken under oath and his timeline corroborated by numerous sources, the report’s authors choose to instead publish a narrative which mimics Mineta, based only on notes taken by Cheney’s wife Lynne and other White House sources. The report adopts the dubious position that it was UA Flight 93 which was being tracked by Cheney in the command bunker, not Flight 77 which the Commission concludes hit the Pentagon. The time of Cheney’s situational awareness, the Commission writes, was not between 9:26 and 9:27, but between 10:10 and 10:18. However, Flight 93 had already crashed in Pennsylvania at 10:06. To explain this, the Commission says:

“The FAA may have been tracking the progress of United 93 on a display that showed its projected path to Washington, not its actual radar return.Thus, the Secret Service was relying on projections and was not aware the plane was already down in Pennsylvania.”

The flight paths of the 9/11 planes were erratic and unpredictable, having already targeted New York and Washington DC. The Commission never explains how Flight 93’s flight path was “projected” to place it 60 miles away from the White House, when it never came within 130 miles of Washington DC airspace. Nor does it explain why the command bunker was looking at a projected flight path rather than the radar screen showing Flight 93, from which the aircraft disappeared when it crashed in Pennsylvania at 10:06.

Critics of the Commission point out that to give such an unlikely and poorly documented narrative precedence over Mineta’s sworn testimony, without even mentioning Mineta’s testimony, is unheard of for a legally empowered commission with a mandate to find the truth of events.

In his actual testimony, Mineta says explicitly, more than once, that the flight he is referring to is “the flight that came into the Pentagon.”

The effect of the obfuscation is to place the question directed by the officer at Cheney, over whether to shoot down the object coming at the Pentagon, outside the time frame during which Cheney could have ordered the aircraft shot down. The 9/11 Commission Report also pushes back the time at which many witnesses say Cheney had already been moved to the command bunker, at around 9:15 just after the second plane hit the South Tower, to nearly 10:00a.m. Again the result is to contradict Mineta’s testimony that Cheney sat and watched the plane coming at the Pentagon, and declined to give a clear shoot-down order.

“and then I guess as the second plane hit, even then it’s not something you were (inaudible) or imagine…I heard a noise, like a kind of like a body bumping a door, or something. And at that point, I kind of looked out into a hallway and saw the Vice President with Secret Service, that are always around him, but Secret Service this time was – had kind of lifted him up, underneath his arms, and running with him. I was like, this is not normal,and why am I still sitting here?”

Because the order to shoot down all unresponsive aircraft was not issued by Bush until after the Pentagon was hit, which was at 9:37 a.m., the implication is that the ‘standing order’ referred to by the junior officer was an order to hold fire, until a countermanding order was given.

If Cheney was ordering the military to hold its fire, then arguably, say researchers who discovered the discrepancy, Cheney could have prevented the Pentagon from getting hit.

In another startling discovery, researchers have discovered that the direct testimony of the junior officer speaking to Cheney, who has been identified and confirmed as vice presidential military aide Douglas Cochrane, has been redacted from Commission files and classified as a “national security” secret. The available agenda page preceding the testimony confirms that the subject of the interview was the ‘standing order’ referred to by Mineta. These documents are contained in the 9/11 Commission files entitled “Dana Hyde – Box 3.”

Researchers maintain that the very fact that Flight 77 did not get shot down is sufficient to infer, even without the additional evidence, that the standing order prior to the Pentagon hit was a no-shoot order.

Furthermore, Secret Service notes recently accessed under the Freedom of Information Act corroborate Mineta’s testimony, by re-stating that the calls in the command bunker were that “The plane is 30 miles out” and “The plane is 10 miles out,” and that the calls were made at 9:31a.m. and 9:34 a.m., respectively. The notes were taken by Secret Service agent Miles Kara, and are contained in a box of supporting 9/11 Commission documentation labeled “Miles Kara – Misc.” (can be viewed here.)

Defenders of the Commission account say that Mineta must have been mistaken in his recollections, because, they argue, Mineta could not have been in the command bunker since he said he evacuated at 9:20 a.m., and the official White House evacuation order did not come until 9:45. But Mineta was not in the White House, he was in his office at the Department of Transportation. In addition CNN reported that people had begun evacuating the White House at about 9:20, before the official evacuation order was given. Mineta has steadfastly confirmed in interviews that his recollections are correct, and is supported by the timeline of Bush Director of Counter-Terrorism Richard Clarke.

The Pentagon attacked has long been a subject of contention among so-called “conspiracy theorists,” who have questions about what it was that actually hit the Pentagon. The Mineta testimony revelations do little to settle these. However, they do indicate the elaborate lengths through which the Commission was willing to go to re-write evidence presented to it.