Home Case for Complicity Lies Pentagon Video Clears Up Nothing

911Truth.org is disappointed that the Pentagon has released another video which does not clearly show a Boeing hitting the Pentagon. Despite the hyping of this release as offering ‘definitive proof’, we are surprised that this inconclusive video remained hidden to the American people for nearly five years. 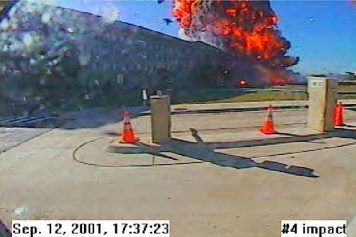 Recall that www.Flight77.info documents two years of FOIA requests for 85 videotapes in the possession of the FBI that pertain to the Pentagon strike. The site’s proprietor, like the steering committee of 9/11truth.org, is hopeful that a release of this footage will show definitively that a plane hit the Pentagon so that distracting speculation about the Pentagon attack can cease. But today’s video does nothing of the sort.

If the Pentagon and the Bush administration truly sought to offer clear evidence for the official story of the Pentagon strike, why would they choose to release images that resemble the previously released stills rather than the footage from the Sheraton, the Citgo gas station, or the Virginia D.O.T that presumably would show the events more clearly?

We will continue to relentlessly pursue a full investigation of the events surrounding 9/11 and seek justice for the victims, as clearly defined in our mission statement.

Furthermore, 9/11 widow Lori van Auken testified before hearings held by Rep. Cynthia McKinney in July of 2005 that the final report actually raised more questions than it had answered.

Some (like Fox News) who deride us for demanding a thorough, unbiased investigation attempt by doing so to shift the focus away from the valid concerns the family members and the 9/11 truth movement have sought answers to for more than four years. Others offer derision from ignorance. In both cases no useful purpose is served.

We hope the release of this video serves to refocus Americans’ attention on these unanswered questions. We also hope that the corporate media will cease equating all 9/11 skepticism with the claim that a plane did not hit the Pentagon. The credible challenges to the official story are multi-faceted and well-researched. All it takes is an effort to discover and report on them.

In this spirit, we call for journalists of integrity to turn their attention to the dozens of remaining unanswered questions surrounding the 9/11 attacks, many of which unfortunately support the view that elements within the government had foreknowledge of and may have been complicit in the attacks.

Journalists: For a comprehensive resource on the many paths into 9/11 research and activism, please visit Welcome Truth Seekers.

For a thorough analysis of the official version of the Pentagon attack, as well as a critical analysis of a few of the ungrounded theories being propounded by some, please see: On Ungrounded Theories and Disinformation

For a research archive of important essays and articles pertaining to 9/11 truth, please visit: http://911readingroom.org/bib/

Finally, for the most complete timeline of events associated with the 9/11 attacks, please visit: http://cooperativeresearch.org/project.jsp?project=911_project