WASHINGTON – Even as Americans struggle with two wars and an economy in tatters, a USA TODAY/Gallup Poll finds majorities in favor of investigating some of the thorniest unfinished business from the Bush administration: Whether its tactics in the “war on terror” broke the law.

Close to two-thirds of those surveyed said there should be investigations into allegations that the Bush team used torture to interrogate terrorism suspects and its program of wiretapping U.S. citizens without getting warrants. Almost four in 10 favor criminal investigations and about a quarter want investigations without criminal charges. One-third said they want nothing to be done.

CALLS TO MOVE ON: Even reversed, Bush policies divide 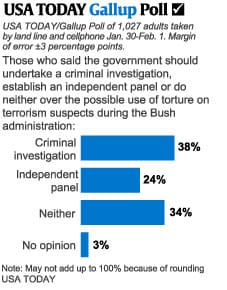 Even more people want action on alleged attempts by the Bush team to use the Justice Department for political purposes. Four in 10 favored a criminal probe, three in 10 an independent panel, and 25% neither.

The ACLU and other groups are pressing for inquiries into whether the Bush administration violated U.S. and international bans on torture and the constitutional right to privacy. House Judiciary Chairman John Conyers and his Senate counterpart, Patrick Leahy, have proposed commissions to investigate.

Asked Monday about Leahy’s plan, President Obama said he would look at it. He added, “my general orientation is to say, let’s get it right moving forward.” Obama and Attorney General Eric Holder have declined to rule out prosecutions. Leon Panetta, named to head the CIA, said this month that CIA officers would not be prosecuted for harsh interrogations authorized by the Bush White House.

Leahy, D-Vt., this week proposed a “truth commission” to assemble facts. He said the panel could offer immunity from prosecution for everything but perjury. “We need to get to the bottom of what happened and why,” he said.

Conyers, D-Mich., has called for a panel that would gather facts and make recommendations, and could possibly lead to prosecutions. “This isn’t payback,” he said. “We are getting things straightened out for the future.”

The Republican viewpoint was summed up recently by Sen. Arlen Specter, R-Pa. “If every administration started to re-examine what every prior administration did, there would be no end to it,” he said. “This is not Latin America.”

The politics of any investigation would be delicate. “You’d need people who haven’t made up their minds,” says Tom Kean, a Republican who co-chaired the 9/11 Commission.

The Bush administration’s anti-terrorism policies have generated controversies, lawsuits and indelible images such as those of abuses at Abu Ghraib prison in Iraq.

They’ve also given rise to multiple opinions on whether to investigate, prosecute or just move on.

In his inaugural address, President Obama said that “we reject as false the choice between our safety and our ideals.” In his first three weeks as president, Obama altered several Bush administration policies. He has ordered that the CIA close its detention facilities, that Guantánamo Bay prison close within a year, and that U.S. officials abide by treaties and domestic laws that prohibit torture or degradation of prisoners.

He also has named a special task force to look into whether standard military interrogation procedures are sufficient, and whether rendition — sending prisoners to other countries — compromises U.S. compliance with bans on torture.

A poll of MoveOn.org members suggests that even among liberals, there are more pressing priorities right now. Asked their top goals for 2009, members put “hold the Bush administration accountable” in seventh place.

Former congressman Tom Davis, president of the moderate Republican Main Street Partnership, says investigations and prosecutions are unnecessary. “The policies have been reversed. The liberals have won,” he says. “There’s no percentage in going back now and trying to punish the people who made these decisions in good faith.”

Michael Ratner, president of the Center for Constitutional Rights, a liberal advocacy group, says Obama’s executive orders leave “too much wiggle room” for him and his successors, and could be reversed. “The only way to deter torture in the future is by sending the message that you’ll be prosecuted,” he says.

Scott Horton, a human rights lawyer who analyzed how to proceed in the December Harper’s, says it’s more important that people in a democratic society “know what was done in their name and by whom.”

Horton proposes a “commission of inquiry” modeled on the Warren Commission that investigated the Kennedy assassination and the Kerner Commission that examined the causes of race riots. Such a commission wouldn’t necessarily lead to prosecutions, Horton says, but it might.

Rep. John Conyers, D-Mich., chairman of the House Judiciary Committee, proposes something similar in a bill he introduced this year. It specifies a number of areas to explore, including:

– Detention. Should the CIA and the military be able to detain suspected terrorists indefinitely, without charging them or allowing them lawyers?

– Enhanced interrogation. Should prisoners be subjected to waterboarding (simulated drowning) and other techniques commonly seen as torture?

– Extraordinary rendition. Should U.S. authorities send suspects to prisons in countries where harsh interrogations, including torture, are likely?

– Warrantless electronic surveillance. Was it legal for U.S. officials to eavesdrop on citizens without getting warrants to do so?

Former vice president Dick Cheney says the tactics were necessary. “If it hadn’t been for what we did … then we would have been attacked again,” he told Politico this month.

The conundrums facing any commission include this tangle of facts: Cheney has acknowledged the use of waterboarding. Attorney General Eric Holder has said waterboarding is torture. And military Judge Susan Crawford told The Washington Post last month that a Guantánamo detainee had been tortured.

The Bush team was advised that waterboarding and other controversial policies were legal. “They got the legal opinions they wanted from their own people,” says Republican Tom Kean, who co-chaired the 9/11 Commission.

Still, Kean adds: “It was a very traumatic period right after 9/11. The theory among a lot of government officials was … there was another attack coming sooner rather than later. My view is that violating the law by torturing people is not justified under any circumstances, but other people feel differently.”

As of Wednesday, Conyers’ commission bill had 22 co-sponsors. He says that will grow. “We don’t want to act like we’re rushing to turn the clock back,” he says. “We’re letting these things sink in.”

Horton says he expects the facts to unfold slowly through an independent commission, congressional hearings, lawsuits and probes inside Justice, followed eventually by an administration decision on how to proceed. “The action that’s taken might very well include pardons,” he says. Whatever the outcome, he predicts, “it’s not going to be fully satisfactory to people on either side.”

REINING IN THE IMPERIAL PRESIDENCY
Lessons and Recommendations Relating to the Presidency of George W. Bush

A Review of the FBI’s Involvement In and Observations of Detainee Interrogations at Guantánamo Bay, Afghanistan, and Iraq

US Department of Justice, Office of Inspector General, Oversight and Review Division, May, 2008