On March 18th, 2004, activists from the No Police State Coalition were vindicated in New York Criminal Court. Port Authority Police falsely arrested activists and claimed the sidewalk in front of Ground Zero was private property.

Free speech and free assembly are guaranteed at Ground Zero.

Jason Blank was one of the wrongfully arrested defendants. His case went before Judge Judith Levitt in New York State Criminal Court. The arrest dealt with a charge of trespassing on a public sidewalk that Port Authority police falsely claimed was private property. Angel Kelly spoke on the behalf of the Port Authority. Lt. Gilbert was present during the arrest on February 7, 2004. The following exchange is from transcripts of the case
– docket number 2004SN022190.

THE COURT: Was it inside the train station?

MS. KELLY: Not inside, but right at the entrance of it, which now leads up to the sidewalk. Before, previously, prior to 9/11 the Path Station was underground. Now the reconstructed temporary station now leads upward to the street level.

LT. GILBERT: The train station it is all sidewalk to the exit. The entrance and exit that is part of the station.

THE COURT: But the sidewalk is a public place. It is not part of the premises of the Port Authority.

MS. KELLY: Your Honor, it is the possession of the Port Authority. That entire area is the property.

THE COURT: It is your possession? It is the possession of the Port Authority?

MS. KELLY: Ground Zero is technically the property of the Port Authority.

THE COURT: Not the sidewalk surrounding Ground Zero, that’s a public sidewalk. Both cases are dismissed.

MR. BLANK: Can I ask they be dismissed on constitutional grounds?

THE COURT: Go away. 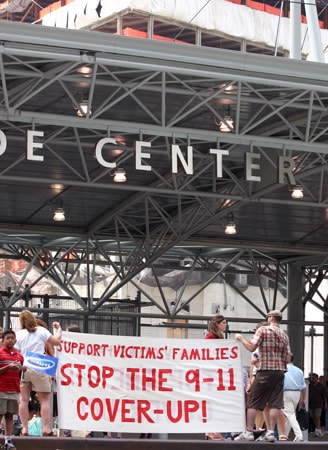 Since February 14, 2004, NY 9/11 Truth has been standing directly in front of Ground Zero handing out educational materials and speaking to the public. With the Republican National Convention (RNC) approaching, signs are showing the police will be little concerned with what is 100% legal and what is not.

On August 14, 2004 police confronted NY 9/11 Truth activists and made the same false claim once again. The officer stated Ground Zero was
“private property, Port Authority property,” and that they had to leave. Having already been proven to be a lie, as documented in court, the activists did not comply with the
officer’s request. Eventually, the officer left stating the possibility of future arrest. It is legal for a police officer to lie to get an individual to comply with his request.

It is more important than ever that individuals stand up for their rights as the RNC comes to New York and the police state flexes its muscles. The GOP is returning to the scene of the crime with a massive showing of military might…

Original continues with a discussion of the 4:11 blackout and its
implications for the election at http://www.legitgov.org/essay_kane_arrests_at_ground_zero_pt_two_081704.html