Support the 9/11 families and others who are asking President Obama to review the evidence in the documentary, 9/11: Explosive Evidence — Experts Speak Out

Their examination of scientific evidence suggests that the collapse of the Twin Towers and WTC7 was not adequately explained by the 9/11 Commission, FEMA, and NIST (National Institute of Standards and Technology) reports, all of which contain serious errors and omissions.

Why should this film matter to you, the reader, 11 years later? How will it help for President Obama to see this film? 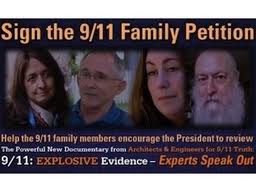 9/11: Explosive Evidence – Experts Speak Out challenges the roots of the policies that gave rise to (1) the wars in Iraq and Afghanistan, which have already cost more than a million lives and $1.3 trillion and have substantially contributed to our financial crisis; and (2) legislation such as the Patriot Act and NDAA [National Defense Authorization Act], which has severely impacted our civil liberties.

9/11 family members Michele Little, Jane Pollicino, Bob McIlvaine, and Josef Princiotta sponsored this documentary, produced and directed by Richard Gage, AIA, founder of Architects & Engineers for 9/11 Truth. This nonprofit organization represents more than 1,700 architects, engineers, and others–including Lynn Margulis, National Medal of Science winner–who are calling for a new scientific investigation into the destruction of all three WTC skyscrapers on 9/11. Gage is currently touring 30 cities across the U.S. through July 2012 to share the film’s startling facts and vitally important implications with the public. To learn more, watch the trailer and the film at 911ExpertsSpeakOut.org, or attend one of the world premieres.