The following is a response from the U.S. Secret Service to a Freedom of Information Act request for the arrival time of U.S. vice president Richard Cheney at the Presidential Emergency Operations Center (PEOC) on September 11, 2001, as well as the names of all those granted entry there that day.

Reference is made to your Freedom of InformationlPrivacy Acts requests originally received by the United States Secret Service on April 17, 2008, for information pertaining to the following:

File no. 20080330: copies of documentation pertaining to the names of persons admitted entry into the Presidential Emergency Operations Center (PEOC) located within the White House on September 11, 2001 ;

File no. 20080331: copies of documentation which reveal the time on September 11, 2001, Vice President of the United States Richard Cheney entered the Presidential Emergency Operations Center (PEOC) located within the White House.

A review of the Secret Service’s systems of records indicated that there are no records or documents pertaining to your requests in Secret Service files. Enclosed is a copy of your original request.

If you disagree with our determination, you have the right of administrative appeal within 35 days by writing to Freedom of Information Appeal, Deputy Director, U. S. Secret Service, Communications Center, 245 Murray Lane, SW, Building T-5, Washington, D.C. 20223. If you choose to file an administrative appeal, please explain the basis of your appeal and reference the case number listed above.

From the History Commons:

According to counterterrorism “tsar” Richard Clarke and others, Vice President Dick Cheney goes from his White House office to the Presidential Emergency Operations Center (PEOC), a bunker below the East Wing of the White House, at about this time. National Security Adviser Condoleezza Rice, after initiating a video conference with Richard Clarke in the West Wing, goes to the PEOC to be with Cheney. There is no video link between response centers in the East and West Wings, but a secure telephone line is used instead. [New York Times, 9/16/2001; Daily Telegraph, 12/16/2001; ABC News, 9/14/2002; Clarke, 2004, pp. 3-4] One eyewitness, David Bohrer, a White House photographer, says Cheney leaves for the PEOC just after 9:00 a.m. [ABC News, 9/14/2002] White House adviser Karl Rove, who is with the president in Florida, appears to corroborate this account, later telling NBC News that when Bush tries phoning Cheney at around 9:16 a.m., he is unable to contact him because “the vice president was being… grabbed by a Secret Service agent and moved to the bunker” (see (9:16 a.m.-9:29 a.m.) September 11, 2001). [MSNBC, 9/11/2002] And Transportation Secretary Norman Mineta says that when he arrives at the PEOC, at around 9:20-9:27, Cheney is already there (see (Between 9:20 a.m. and 9:27 a.m.) September 11, 2001). [MSNBC, 9/11/2002; 9/11 Commission, 5/23/2003; Academy of Achievement, 6/3/2006] However, there is a second account claiming that Cheney doesn’t leave until sometime after 9:30 a.m. In this account, Secret Service agents burst into Cheney’s White House office. They carry him under his arms—nearly lifting him off the ground—and propel him down the steps into the White House basement and through a long tunnel toward the underground bunker. [New York Times, 10/16/2001; Newsweek, 12/31/2001; Washington Post, 1/27/2002; BBC, 9/1/2002; MSNBC, 9/11/2002; 9/11 Commission, 6/17/2004] According to journalist and author Stephen Hayes, it takes “Less than a minute” for the Secret Service agents to escort Cheney from his office down to the secure tunnel leading to the PEOC. [Hayes, 2007, pp. 335] At about the same time, National Security Adviser Rice is told to go to the bunker as well. [ABC News, 9/11/2002] Despite admitting that there “is conflicting evidence about when the vice president arrived” in the PEOC, the 9/11 Commission will conclude that the “vice president arrived in the room shortly before 10:00, perhaps at 9:58.” [9/11 Commission, 7/24/2004, pp. 40] In addition to the eyewitness accounts of Clarke, Mineta, and Bohrer, several accounts claim that Cheney is in the bunker when he is told Flight 77 is 50 miles away from Washington, at about 9:26 a.m. 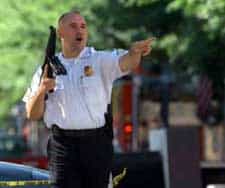 Transportation Secretary Norman Mineta arrives at the White House bunker—the Presidential Emergency Operations Center (PEOC)—containing Vice President Dick Cheney and others. Mineta will tell NBC News that he arrives there at “probably about 9:27,” though he later says to the 9/11 Commission that he arrives at “about 9:20 a.m.” He also later recalls that Cheney is already there when he arrives. [MSNBC, 9/11/2002; 9/11 Commission, 5/23/2003; St. Petersburg Times, 7/4/2004; Academy of Achievement, 6/3/2006] This supports accounts of Cheney reaching the bunker not long after the second WTC crash (see (9:10 a.m.) September 11, 2001). Questioned about this in 2007 by an activist group, Mineta will confirm that Cheney was “absolutely… already there” in the PEOC when he arrived, and that “This was before American Airlines [Flight 77] went into the Pentagon,” which happens at 9:37. Yet, while admitting there is “conflicting evidence about when the vice president arrived” in the PEOC, the 9/11 Commission will conclude that the “vice president arrived in the room shortly before 10:00, perhaps at 9:58.” Mineta also later claims that when he arrives in the PEOC, Mrs. Lynne Cheney, the wife of the vice president, is already there. Yet the 9/11 Commission will claim she only arrives at the White House at 9:52 (see (9:52 a.m.) September 11, 2001). [9/11 Commission, 7/24/2004, pp. 40; 911truthseattle (.org), 6/26/2007] Once in the PEOC, Mineta establishes open phone lines with his office at the Department of Transportation and with the FAA Operations Center. [Academy of Achievement, 6/3/2006]

According to some accounts, Vice President Cheney is in the Presidential Emergency Operations Center (PEOC) below the White House by this time, along with Transportation Secretary Norman Mineta and National Security Adviser Rice. Mineta says that, while a suspicious plane is heading toward Washington, an unidentified young man comes in and says to Cheney, “The plane is 50 miles out.” Mineta confers with Acting FAA Deputy Administrator Monte Belger, who is at the FAA’s Washington headquarters. Belger says to him, “We’re watching this target on the radar, but the transponder’s been turned off. So we have no identification.” According to Mineta, the young man continues updating the vice president, saying, “The plane is 30 miles out,” and when he gets down to “The plane is 10 miles out,” asks, “Do the orders still stand?” In response, Cheney “whipped his neck around and said, ‘Of course the orders still stand. Have you heard anything to the contrary?’” Mineta says that “just by the nature of all the events going on,” he infers that the order being referred to is a shoot-down order. Nevertheless, Flight 77 continues on and hits the Pentagon. [BBC, 9/1/2002; ABC News, 9/11/2002; 9/11 Commission, 5/23/2003; St. Petersburg Times, 7/4/2004] However, the 9/11 Commission will later claim the plane heading toward Washington is only discovered by the Dulles Airport air traffic control tower at 9:32 a.m. (see 9:32 a.m. September 11, 2001). But earlier accounts, including statements made by the FAA and NORAD, will claim that the FAA notified the military about the suspected hijacking of Flight 77 at 9:24 a.m., if not before (see (9:24 a.m.) September 11, 2001). The FBI’s Washington Field Office was also reportedly notified that Flight 77 had been hijacked at about 9:20 a.m. (see (9:20 a.m.) September 11, 2001). The 9/11 Commission will further contradict Mineta’s account saying that, despite the “conflicting evidence as to when the Vice President arrived in the shelter conference room [i.e., the PEOC],” it has concluded that he only arrived there at 9:58 a.m. It also claims that Condoleezza Rice only entered the PEOC shortly after Cheney did. [9/11 Commission, 6/17/2004] According to the Washington Post, the discussion between Cheney and the young aide over whether “the orders” still stand occurs later than claimed by Mineta, and is in response to Flight 93 heading toward Washington, not Flight 77. [Washington Post, 1/27/2002]

Cheney’s bunker mentality on the morning of 911 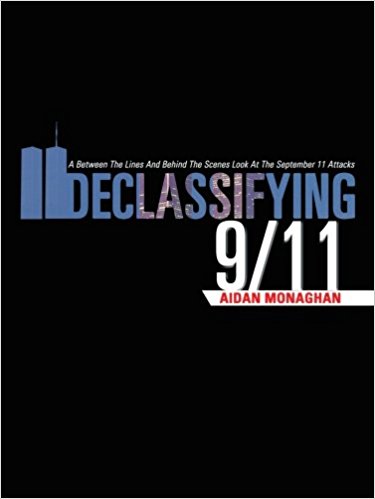 Aidan Monoghan is author of Declassifying 9/11: A Between the Lines and Behind the Scenes Look at the September 11 Attacks