Racist bigots with the “Tea Party Movement” aren’t the only ones in the streets, as we proved today with coast to coast protests against the wars and torture the U.S. is still carrying out.
There were thousands marching in DC today. 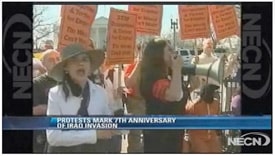 You can read my speech here.

After the march, several protesters were arrested in front of the White House, including Cindy Sheehan, Elaine Brower, and Matthis Chiroux.

They are sitting in jail tonight and we are told they won’t be arraigned until Tuesday.

In San Francisco, Daniel Ellsberg spoke to a rally of thousands on the importance of protest:

Daniel Ellsberg, who leaked the top-secret Pentagon Papers study of the Vietnam War and is the subject of the recent documentary film, “The Most DangerousMan in America,” likened the protest and others like it around the country Saturday to a day of demonstrations organized against the conflict in Vietnam in 1969.

“They thought it had no effect,” he told the crowd in San Francisco, referring to the 1969 protesters. “They were wrong.”

Ellsberg said President Richard Nixon was planning to escalate the war around that time, but held off.

In Los Angeles, thousands also marched, including a We Are Not Your Soldiers contingent carrying a banner signed by many more youth pledging to resist military recruiters.

Want to see more of this spread? Donate today, and ask your friends to help also. Find out more about our plans to take We Are Not Your Soldiers to students around the country, and how you can be involved.

March Forward! Iraq and Afghanistan Vets Say No to Wars!