On the news today of the death of Harold Pinter, the winner of the 2005 Nobel
Prize for Literature, I remembered hearing his Nobel Laureate lecture/acceptance
speech. I was in London in December 2005, speaking at the annual Stop the War
conference when Pinter delivered his speech – not in Oslo, as Pinter was very
sick and could not travel, but in London via TV link.

I was amazed and thrilled that he chose to use the Nobel Prize platform and
devote a huge portion of his speech to shining an international spotlight on
the tragic effects of the past decades of US foreign policy and particularly,
on George Bush and Tony Blair’s decisions to invade and occupy Iraq, on Guantánamo
and on torture.

Pinter’s Laureate speech question, “Is Our Conscience Dead?” is
most relevant today when three years after his acceptance speech, “Art,
Truth and Politics,” Bush, Cheney, Rice and other administration officials
are either trying to rewrite history or, as in Cheney’s case – purposefully
revealing his role in specific criminal acts of torture and daring the American
legal system and people to hold him accountable.

Following is the part of Pinter’s lecture that speaks to the invasion of Iraq,
torture and Guantánamo – and our collective and individual conscience: 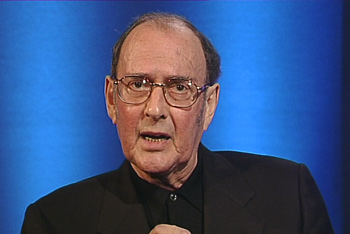 “… The United States no longer … sees any point in being reticent
or even devious. It puts its cards on the table without fear or favour. It quite
simply doesn’t give a damn about the United Nations, international law or critical
dissent, which it regards as impotent and irrelevant.

It also has its own bleating little lamb tagging behind it on a lead, the
pathetic and supine Great Britain.

What has happened to our moral sensibility? Did we ever have any? What do
these words mean? Do they refer to a term very rarely employed these days –
conscience? A conscience to do not only with our own acts but to do with our
shared responsibility in the acts of others? Is all this dead?

Look at Guantánamo Bay. Hundreds of people detained without charge for over
three years, with no legal representation or due process, technically detained
forever. This totally illegitimate structure is maintained in defiance of the
Geneva Convention. It is not only tolerated but hardly thought about by what’s
called the ‘international community’. This criminal outrage is being committed
by a country, which declares itself to be ‘the leader of the free world’. Do
we think about the inhabitants of Guantánamo Bay? What does the media say about
them? They pop up occasionally – a small item on page six. They have been consigned
to a no man’s land from which indeed they may never return. At present many
are on hunger strike, being force-fed, including British residents. No niceties
in these force-feeding procedures. No sedative or anesthetic. Just a tube stuck
up your nose and into your throat. You vomit blood. This is torture.

The invasion of Iraq was a bandit act, an act of blatant state terrorism,
demonstrating absolute contempt for the concept of international law. The invasion
was an arbitrary military action inspired by a series of lies upon lies and
gross manipulation of the media and therefore of the public; an act intended
to consolidate American military and economic control of the Middle East masquerading
– as a last resort – all other justifications having failed to justify themselves
– as liberation. A formidable assertion of military force responsible for the
death and mutilation of thousands and thousands of innocent people.

We have brought torture, cluster bombs, depleted uranium, innumerable acts
of random murder, misery, degradation and death to the Iraqi people and call
it ‘bringing freedom and democracy to the Middle East’.

How many people do you have to kill before you qualify to be described as
a mass murderer and a war criminal? One hundred thousand?

More than enough, I would have thought. Therefore it is just that Bush and
Blair be arraigned before the International Criminal Court of Justice. But Bush
has been clever. He has not ratified the International Criminal Court of Justice.
Therefore if any American soldier or for that matter politician finds himself
in the dock Bush has warned that he will send in the marines. But Tony Blair
has ratified the Court and is therefore available for prosecution. We can let
the Court have his address if they’re interested. It is Number 10, Downing Street,
London.

Death in this context is irrelevant. Both Bush and Blair place death well
away on the back burner. At least 100,000 Iraqis were killed by American bombs
and missiles before the Iraq insurgency began. These people are of no moment.
Their deaths don’t exist. They are blank. They are not even recorded as being
dead. ‘We don’t do body counts,’ said the American general Tommy Franks.

Early in the invasion there was a photograph published on the front page of
British newspapers of Tony Blair kissing the cheek of a little Iraqi boy. ‘A
grateful child,’ said the caption. A few days later there was a story and photograph,
on an inside page, of another four-year-old boy with no arms. His family had
been blown up by a missile. He was the only survivor. ‘When do I get my arms
back?’ he asked. The story was dropped. Well, Tony Blair wasn’t holding him
in his arms, nor the body of any other mutilated child, nor the body of any
bloody corpse. Blood is dirty. It dirties your shirt and tie when you’re making
a sincere speech on television.

The 2,000 American dead are an embarrassment. They are transported to their
graves in the dark. Funerals are unobtrusive, out of harm’s way. The mutilated
rot in their beds, some for the rest of their lives. So the dead and the mutilated
both rot, in different kinds of graves. …

I have said earlier that the United States is now totally frank about putting
its cards on the table. That is the case. Its official declared policy is now
defined as ‘full spectrum dominance’. That is not my term, it is theirs. ‘Full
spectrum dominance’ means control of land, sea, air and space and all attendant
resources.

The United States now occupies 702 military installations throughout the world
in 132 countries, with the honourable exception of Sweden, of course. We don’t
quite know how they got there but they are there all right.

The United States possesses 8,000 active and operational nuclear warheads.
Two thousand are on hair trigger alert, ready to be launched with 15 minutes
warning. It is developing new systems of nuclear force, known as bunker busters.
The British, ever cooperative, are intending to replace their own nuclear missile,
Trident. Who, I wonder, are they aiming at? Osama bin Laden? You? Me? Joe Dokes?
China? Paris? Who knows? What we do know is that this infantile insanity – the
possession and threatened use of nuclear weapons – is at the heart of present
American political philosophy. We must remind ourselves that the United States
is on a permanent military footing and show no sign of relaxing it.

Many thousands, if not millions, of people in the United States itself are
demonstrably sickened, shamed and angered by their government’s actions, but
as things stand they are not a coherent political force – yet. But the anxiety,
uncertainty and fear which we can see growing daily in the United States is
unlikely to diminish.

I know that President Bush has many extremely competent speech writers but
I would like to volunteer for the job myself. I propose the following short
address which he can make on television to the nation. I see him grave, hair
carefully combed, serious, winning, sincere, often beguiling, sometimes employing
a wry smile, curiously attractive, a man’s man.

I hope you will decide that yes, we do have a conscience and that you will
join the millions of Americans who say we must hold accountable those who have
committed criminal acts while in government – the policy makers as well as the
implementers.

Write and call the new President and the new Congress and demand official
investigations into war crimes and other criminal acts committed by members
of the Bush administration and join us on Inauguration day to remind the new
President of his responsibilities.

Ann Wright is a 29-year US Army/Army Reserves veteran who retired as a
Colonel, and a former US diplomat who resigned in March 2003 in opposition to
the war on Iraq. She served in Nicaragua, Grenada, Somalia, Uzbekistan, Kyrgyzstan,
Sierra Leone, Micronesia and Mongolia. In December 2001 she was on the small
team that reopened the US Embassy in Kabul, Afghanistan. She is the co-author
of the book “Dissent: Voices of Conscience.”

How 9/11 Changed My Generation