We strongly agree with President Bush’s decision to move Condoleezza Rice out of her position as National Security Advisor. Ms. Rice’s statement from her May 16, 2002 press briefing, “I don’t think anybody could have predicted that these people would try to use an airplane as a missile, a hijacked airplane as a missile” made it clear that she was ill equipped to be advising anyone on matters of national security. Condoleezza Rice was the top National Security official with President Bush at the July 2001 G-8 summit in Genoa. This was where “U.S. officials were warned that Islamic terrorists might attempt to crash an airliner into the summit, which prompted officials to close the airspace over Genoa and station anti-aircraft guns at the city’s airport.” 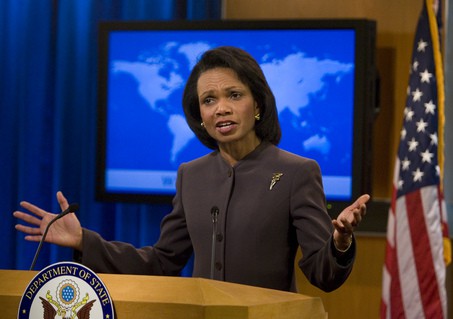 And Ms. Rice’s failures did not stop there.

On August 6, 2001, just over a month before 9/11 and during the “summer of threat”, President Bush received a Presidential Daily Briefing (PDB) at his Crawford, Texas ranch, entitled Bin Laden Determined to Strike in the US. The August 6th memo focused entirely on the possibility of terrorist attacks inside the US. In testimony before the 9/11 Commission, Condoleezza Rice, National Security Advisor to President Bush, stated to the 9/11 Commission that she and President Bush considered the August 6th PDB as just an historical document and commented that this was not considered a domestic warning. At this 9/11 hearing, Condoleezza Rice had taken an oath to tell the truth to the Commissioners, thus, we thought she might be spending her free time defending herself against perjury charges.

Furthermore, a good National Security Advisor should have clearly been able to interpret this Presidential Briefing which included language like “… patterns of suspicious activity in this country consistent with preparations for hijackings or other types of attacks, including recent surveillance of federal buildings in New York”, as both a current and a predictive statement. Moreover, the National Security Advisor, knowing that the terrorist chatter was high combined with the clear warning contained in this briefing, should have tasked the intelligence agencies to do something. Unfortunately, Ms. Rice neither understood the threat nor took any action to avert it.

Additionally, according to the 9/11 Commission report, chief White House expert on terrorism, Richard Clarke, sent Rice an urgent memo just days after she took office stressing the severity of the terrorist threat. She did not respond. Although the national security leadership met formally nearly 100 times in the months prior to the Sept. 11 attacks . . . terrorism was the topic during only two of those sessions. The first meeting that dealt with al Qaeda did not occur until 9/4/01.

Finally, in past elections the Director of National Security remained above the political fray and stayed off the campaign trail. After all, the NSA is supposed to work for all Americans of every political persuasion. However, during the 2004 presidential campaign, National Security Adviser Condoleezza Rice took time out from her busy national security duties to stump for the president across key battleground states. This was at a time when the country was thought to be under a grave threat because of the elections and because of the release of another threatening Osama Bin Laden video. Condoleezza Rice did not stay in Washington to protect Americans in the event of another terrorist attack, but instead was found crossing the country on a partisan mission to re-elect President Bush.

Ironically, during 2002, Ms. Rice had repeatedly claimed that she could not possibly testify before the bipartisan 9/11 Commission for fear that it would break precedents set by past national security advisers, yet she had no reservations about breaking past precedents when it came to using her position to advance her partisan political interests. Proving once again that for this administration politics trump national security.

While we can certainly agree that this country is in dire need of a new National Security Advisor, we are thoroughly aghast at President Bush’s decision to promote Ms. Rice to the position of Secretary of State. Usually, when someone completely fails at their job, they do not get a promotion, which rewards their failure.

It has been over three years since the murder of our loved ones. To date, not one person has been held responsible for the failures to protect them and this nation. Worse yet, some, like Ms. Rice, are being promoted. What will we tell the children of these murdered innocents about our system of justice and our national security? And more importantly, how can we assure them they are safe from further harm?