Now Secretary of State, Rice was then head of the National Security Council – “the final decision maker” on EPA statements about lower Manhattan air quality, the documents say.

Scientists and lawmakers have since deemed the air rife with toxins. 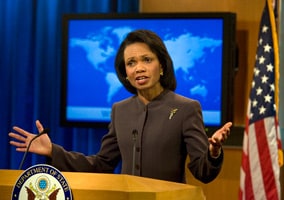 Early tests known to the EPA at the time had already found high asbestos levels, the notes say. But those results were omitted from the press releases because of “competing priorities” such as national security and “opening Wall Street,” according to a report by the EPA’s inspector general.

The chief of staff for then-EPA head Christie Todd Whitman, Eileen McGinnis, told the inspector general of heated discussions, including “screaming telephone calls,” about what to put in the press releases.

The notes come from a 2003 probe into public assurances made on Sept. 16, five days after the 9/11 attacks. They tell how a White House staffer “worked with Dr. Condoleezza Rice’s press secretary” on reviewing the press releases for weeks.

Whitman said through a spokeswoman Friday that she never discussed her press releases directly with Rice. She also defended her collaboration with the White House.

Now-retired Inspector General Nikki Tinsley told The Post her auditors tried to question the head of President Bush’s Environmental Quality Council, but “he would not talk to us.”

Calls and e-mails to Rice were not returned.