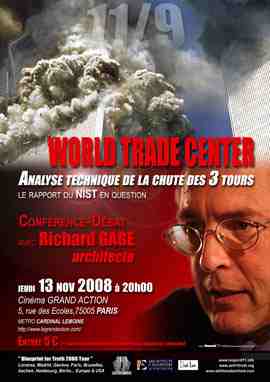 There
were 242 people attending the presentation (which was slightly above the number
of seats of the venue) on Thursday the 13th of November: a full house indeed
!

We actually had to refuse some people even though we did put a notice on our
site stating that it was fully booked, and asking people NOT to come if they
had not made reservations already — do note that we probably could have had
about twice as many people if we have had the adequate hall (we had to settle
for this movie house, a larger venue was way too much money for our finances,
unfortunately) and therefore, we had to cease advertising the presentation a
few days before it was held…

We then decided to put the emphasis on getting the info to local (French)
professional architects & engineers, and there were 42 architects and 41
engineers present that night.

Hopefully, a fair amount of the above mentioned professionals will meet up
and create a group of their own, in connection with both A&E and ReOpen911.info

We are going to see to that; it is also just as important that these professionals
pass the information they received to their friends and colleagues, in every
country M. Gage visits.

Everything went fine, as these figures show:

Many thanks to Richard Gage’s dedication and Annie Machon’s decisive
help in putting this European tour together.