One of the most surprising events of 9/11 was that New York Mayor Rudy Giuliani told ABC’s Peter Jennings in the morning that while he and his Emergency Management team – who were in a building at 75 Barclay Street where they had set up temporary headquarters after the Twin Towers were struck – had been warned that the World Trade Center was going to collapse, so they had decided to leave the Barclay Street building.

He later gave the 9/11 Commission a quite different account about which building was expected to collapse.

The 9/11 Commission did not ask him about the apparent contradictions, so the account he gave the Commission must be considered the official story. 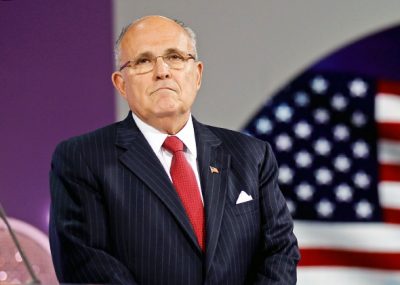 On May 19, 2004, Mayor Giuliani testified before the 9/11 Commission. Volunteering to tell what he had done on the morning of September 11, 2001, Giuliani said that, after finishing breakfast at a hotel some distance from the World Trade Center, he was told that a twin-engine plane had crashed into its North Tower. Then while in a van trying to get to the World Trade Center, Giuliani and his breakfast companions learned that the South Tower had been struck by a second plane, making it clear to him that a terrorist attack was underway.

Giuliani and his companions then found that the van could get no farther than Barclay Street, at which point the Police Commissioner notified him that 7 World Trade Center (which housed Giuliani’s Office of Emergency Management) had been evacuated, so they would instead set up a command post at 75 Barclay Street. Giuliani told the Commission that, after going inside 75 Barclay Street and while waiting to talk to Vice President Dick Cheney on the phone:

I heard a click, the desk started to shake, and I heard next Chief Esposito, who was the uniformed head of the police department, . . . say, ‘The [South] tower is down, the tower has come down.’ And my first thought was that one of the radio towers from the top of the World Trade Center had come down. I did not conceive of the entire tower coming down, but as he was saying that, I could see the desk shaking and . . . then all of a sudden I could see outside a tremendous amount of debris and it first felt like an earthquake, and then it looked like a nuclear cloud. So we realized very shortly that we were in danger in the [Barclay  Street] building, that the building could come down. . . . So the police commissioner and I, and the deputy police commissioner, we jointly decided that we had to try to get everyone out of the building.

So Giuliani and his team left the Barclay Street building, because “if something happened and the building crashed, you’d virtually have all of city government gone.”[1] 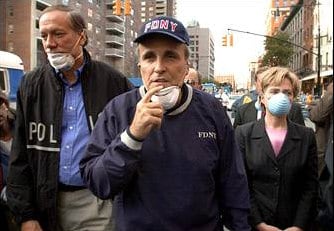 Giuliani’s account to the 9/11 Commission contains two serious contradictions with what Giuliani had told Peter Jennings in an interview him that morning:

(1) He did not tell the Commission that he had been warned that the World Trade Center was going to collapse.

(2) He told the Commission that he and his people left the Barclay Street building for fear that this building (not the WTC) might collapse.

While being interviewed during the morning of 9/11 via telephone by Peter Jennings, who was then the anchor at ABC News, Giuliani said that after he learned about the attack on the World Trade Center:

I went down to the scene and we set up headquarters at 75 Barclay Street, which was right there with the Police Commissioner, the Fire Commissioner, the Head of Emergency Management, and we were operating out of there when we were told that the World Trade Center was going to collapse. And it [the South Tower] did collapse before we could actually get out of the [Barclay Street] building, so we were trapped in the building for 10, 15 minutes, and finally found an exit and got out.[2]

Giuliani’s statement to Jennings agreed in part with the account he later gave the 9/11 Commission, but he did not tell the Commission about being “told that the World Trade Center was going to collapse.” Also, whereas he had told Jennings that he was concerned that the Twin Towers were going to collapse, he told the Commission that he instead was worried that he and his people were “in danger in the [Barclay Street] building, that the building could come down.”

Although the 9/11 Commission failed to ask Giuliani about these contradictions, WNBC reported that in May 2007, he was asked about the Jennings interview by a small group of people with a video camera.[3] A young woman, after reminding Giuliani of his statement to Jennings that “no steel structure in history has ever collapsed due to a fire,” asked:

“How come people in the buildings weren’t notified? And who else knew about this? And how do you sleep at night?”

“I didn’t know the towers were going to collapse.”

A male member of the group then reminded Giuliani that he had indeed told Jennings that he had been notified in advance that the towers were going to collapse, adding,

“Who told you the towers were going to collapse in advance, sir?”

I didn’t realize the towers would collapse. . . . Our understanding was that over a long period of time, the way other buildings collapsed, the towers could collapse, meaning over a 7, 8, 9, 10-hour period. No one that I know of had any idea they would implode. That was a complete surprise.[4]

But this explanation contradicts Giuliani’s statement to Jennings—

“we were told that the World Trade Center was going to collapse. And it did collapse before we could actually get out of the building.”

According to that statement, Giuliani had clearly expected an imminent collapse of at least one of the Twin Towers.

Giuliani’s Claim about Other Building Collapses

In the first place, in speaking about “the way other buildings collapsed,” he implied that steel-framed high-rise buildings had previously collapsed. (Otherwise, the mention of collapsed buildings would have been irrelevant.) In fact, the young woman’s statement, that “no steel structure in history has ever collapsed due to a fire,” is not controversial. Two months after 9/11, for example, New York Times reporter James Glanz wrote that “experts said no . . . modern, steel-reinforced high-rise, had ever collapsed because of an uncontrolled fire.”[5]

Also, although Giuliani claimed that he expected a tower to collapse over a 7-10 hour period, steel-framed buildings had burned, some of them longer than 10 hours, without collapsing:

However, although the implicit claim that steel-framed buildings had collapsed after burning for several hours was false, his statement was:

“Our understanding was that over a long period of time, the way other buildings collapsed, the towers could collapse” (emphasis added).

So one might think that Giuliani was telling the truth about what he and his people believed.

However, even that statement would be false, because Robert F. Shea, the acting administrator of FEMA’s Federal Insurance and Mitigation Administration, said:

“No one who viewed it that day, including myself, believed that those towers would fall,”[10] and this view was confirmed by multiple firefighters and other experts.[11]

Accordingly, there is no basis for a revisionist account, according to which Giuliani did not tell ABC’s Peter Jennings that he had been warned that “the World Trade Center was going to collapse.” Given the fact that Giuliani did say this, the next question is: Who gave Giuliani this information?

Who Told Giuliani that the World Trade Center Was Going to Collapse?

A partial answer may be found in the oral histories recorded by the Fire Department of New York:

However, the OEM was under Giuliani’s control.[17] So although Giuliani said that he and others at 75 Barclay Street “were told” that the towers were going to collapse, it was his own people in his own office who were providing this warning.

The only remaining question is: How could people in the OEM have known – given the virtually universal belief that a total collapse of the towers would have been impossible – that the towers were going to collapse?

The Fire Chief Who Expected the Towers to Fall

“none of the [fire] chiefs present believed that a total collapse of either tower was possible.”[18]

And this was an important exception, because, as 9/11 Commissioner Timothy Roemer said, Downey was a “very respected expert on building collapse.” In fact, said a FDNY battalion chief, Downey was “the premiere collapse expert in the country.”[19]

FDNY Commissioner Thomas Von Essen had told the 9/11 Commission that Downey had said to him,

“Boss, I think these buildings could collapse.”[20]

As to why, according to Downey’s nephew Tom Downey, his uncle had been “worried about secondary devices in the towers, explosive devices that could hurt the firemen.”

During his Oral History interview, FDNY chaplain Father John Delendick said that after the top of the South Tower appeared to explode, he asked Downey whether jet fuel had blown up. Downey replied “at that point he thought there were bombs up there because it was too even” – meaning that it had been too even to have been produced by exploding jet fuel.[21]

The account Mayor Giuliani gave to the 9/11 Commission in May 2004, according to which he got out of the building at 75 Barclay Street for fear that it would come down, is contradicted by the account he had given on the morning of 9/11 to ABC’s Peter Jennings.

When Giuliani was challenged to explain why he had not told people in the towers that they were going to collapse, he claimed that he “didn’t realize the towers would collapse” and that “No one that [he knew] of had any idea they would implode.” This is in stark contrast to Giuliani’s statement to Peter Jennings that he was told that the Twin Towers were going to come down.

[3] A televised video of this encounter, entitled “Activists Confront Giuliani over 9/11,” can be viewed on YouTube as “WeAreChange Confronts Giuliani on 9/11 Collapse Lies.”

[10] “Learning from 9/11: Understanding the Collapse of the World Trade Center,” Hearing before the Committee on Science, House of Representatives, 6 March 2002 (http://commdocs.house.gov/committees/science/hsy77747.000/hsy77747_0f.htm). Of course, WTC 7 was different: Many people became convinced that it would come down, but this was after the Twin Towers had come down and after they had been told that it was going to come down. See Chapter 16, above, “The Claim that Foreknowledge of WTC 7’s Fall Was Based on Observations.”

[14] “Rotanz was assigned to the Mayor’s Office of Emergency Management in 2000,” Urban Hazards Forum, FEMA, 2002 (http://christianregenhardcenter.org/urban-hazards/Papers/rotanz.PDF).

[21] Oral History: Father John Delendick, 5. Delendick added: “As we’ve since learned, it was the jet fuel that was dropping down that caused all this.” But what is important is what he reported that Downey, the expert, had said.