While the US media obsesses on delegates, superdelegates and whether or not Hillary Clinton is using math formulae hallowed by MSNBC, we learn that US interrogators used snakes to torture prisoners (that’s right, PentaPost –torture, not ‘interrogate’ and prisoners, not ‘detainees’) at Guantánamo Bay – while the FBI watched. 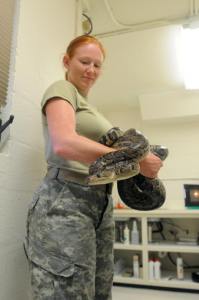 Today, we learned form NEWS.com.au, an Australian news and information site, that US interrogators – at least on one occasion – used a snake (in addition to military dogs and pornography) on prisoners at Guantánamo Bay. We also discovered that “[Australian detainee Mamdouh] Habib alleged that ‘Mike’ a private-contract interrogator with Lockheed Martin, had hit him during an interrogation.” Further, we discovered that, ”of the more than 450 FBI agents who served at Guantánamo… almost half ‘observed or heard about various rough or aggressive treatment of detainees, primarily by military interrogators’.”

Snakes used in interrogation sessions?! This is Nazi tactics territory, folks – using our dollars and under our name! I don’t care about Democratic superdelegate totals or nomination math formulae. The US media is using the election itself as a distraction for war crimes that are being carried out in our name, every day!

Lest we forget: U.S. Has Detained 2,500 Juveniles as Enemy Combatants 16 May 2008 The United States has imprisoned approximately 2,500 people younger than 18 as illegal enemy combatants in Iraq, Afghanistan and Guantánamo Bay since 2002, according to a report filed by the Bush regime with the United Nations Committee on the Rights of the Child.

Is there anyone out there besides me who wants the Bush dictatorship gone – and I mean gone – and I mean now? Impeachment – even if it were miraculously to transpire – is no longer enough! Bush – and his sadomasochistic henchmen – need to stand trial for *treason* and for *war crimes.*

Permitted demonstrations in Washington DC by people wearing pink and sporting clown noses – that the media refuses to cover, anyway – ARE NOT GOING TO CUT IT and NEVER WILL, with this regime!

The Second American Revolution should have began 13 December 2000, the day Al Gore ‘offered his concession’ to George W. Bush.

FBI watched Guantánamo abuse – report 21 May 2008 An FBI agent watched Australian prisoner [former Sydney taxi driver] Mamdouh Habib repeatedly vomit during a marathon interrogation session at Guantánamo Bay in 2004, according to a long-awaited US Justice Department report released today. Details about Mr Habib’s confinement at Guantánamo, including an alleged assault inflicted by a private-contract interrogator with Lockheed Martin, were included in the 370-page report that took the Department of Justice more than three years to compile… Of the more than 450 FBI agents who served at Guantánamo, the report found almost half “observed or heard about various rough or aggressive treatment of detainees, primarily by military interrogators”. “The most frequently reported techniques included sleep deprivation or disruption, prolonged shackling, stress positions, isolation and the use of bright lights and loud music,” the report said. Other abuse allegations include the use of a snake, dogs and pornography on detainees… The US Justice Department report details how Mr Habib told an FBI agent he was tortured in Egypt before being transported to Guantánamo where he was assaulted. “(Mr)Habib alleged that ‘Mike’ a private-contract interrogator with Lockheed Martin, had hit him during an interrogation,” the report said. Mr Habib also claimed “detainees were beaten when guards searched their cells”.

Report: CIA Pushed Torture Envelope –Justice Department Says FBI Warned Spy Agency, Military, That Their Tactics Were “Borderline Torture” 20 May 2008 CIA and military interrogators bucked repeated warnings from the FBI that methods used to question terror suspects were in some cases “borderline torture” and potentially illegal, the Justice Department’s internal watchdog reported Tuesday. Agents repeatedly asked FBI headquarters for guidance, but didn’t get it, as prisoners at Guantánamo were threatened with growling dogs, had their thumbs twisted back and heads wrapped in duct tape.

Report: U.S. Soldiers Did ‘Dirty Work’ for Chinese Interrogators –Alleges Guantánamo Personnel Softened Up [Tortured] Detainees at Request of Chinese Intelligence 20 May 2008 U.S. military personnel at Guantánamo Bay allegedly softened up prisoners at the request of Chinese intelligence officials who had come to the island facility to interrogate the men — or they allowed the Chinese to dole out the treatment themselves, according to claims in a new government report. Buried in a Department of Justice report released Tuesday are new allegations about a 2002 arrangement between the United States and China, which allowed Chinese intelligence to visit Guantánamo and interrogate Chinese Uighurs held there.

Other allegations of detainee abuse contained in the report include:

SNAKES – One FBI employee reported a detainee told him that he found a snake in his cell and he suspected his “interrogators” had something to do with it. The employee indicated in his survey response that he also suspected an interrogator from another agency might have been responsible for placing the snake in the detainee’s cell.

DOGS – Several FBI agents reported that military dogs were used at Guantánamo for purposes other than interrogations, including for the purpose of controlling or intimidating detainees when they arrived at the Cuban base.

MOCK BAPTISM – An FBI agent said “he heard” the military had someone dress up as a Catholic priest and pretend to baptise detainee Yussef Mohammed Mubarak Al-Shihri.

PLACING WOMEN’S CLOTHING ON DETAINEE – Four FBI agents at Guantánamo reported they heard about military personnel placing women’s clothing on detainees, although none of them personally witnessed this conduct.

TOUCHING OR ACTING TOWARD A DETAINEE IN SEXUAL MANNER – More than 20 FBI agents reported they had seen or heard about female interrogators touching or acting towards a detainee in a sexual manner.

W. House ignored FBI concerns on prisoner ‘borderline torture’ 20 May 2008 Top Bush administration security officials ignored FBI concerns over abusive treatment of terrorism suspects, which one agent called “borderline torture,” a four-year Justice Department probe found. The FBI, alarmed by interrogation techniques such as the use of snarling dogs, sexual provocation and forced nudity, clashed with the Defense Department and CIA over their use, said the 370-page report, released on Tuesday by the Justice Department’s inspector general.

Report: FBI Slow in Reporting Detainee Abuse 20 May 2008 FBI officials should have moved more quickly to sound alarms about abusive interrogation practices torture its agents witnessed in Cuba, Iraq and Afghanistan, according to a report by an agency watchdog released this morning. The lengthy study by the Justice Department’s inspector general clears the FBI of engaging in coercive questioning of terrorism suspects, concluding that “the vast majority of FBI agents deployed in the military zones” adhered to bureau policies and balked at more aggressive tactics used by Defense Department and CIA employees and contractors mercenaries.

Efforts to close Guantánamo at standstill: Gates 20 May 2008 Efforts to explore ways of closing the military-run prison at Guantánamo Bay have reached a standstill due to legal and practical problems, Defense Secretary Robert Gates said on Tuesday. Human rights groups and many governments, including allies of the United States, have called on the Bush dictatorship to close the prison, saying it violates international legal standards and harms America’s standing in the world.

US says detains 500 juveniles in Iraq, 10 in Afghanistan –Civil liberties groups denounce detentions as abhorrent, and a violation of U.S. treaty obligations. 19 May 2008 The U.S. military is holding about 500 juveniles suspected of being “unlawful enemy combatants” in detention centers in Iraq and has about 10 detained at the U.S. base at Bagram, Afghanistan, the United States has told the United Nations. A total of 2,500 youths under the age of 18 have been imprisoned, almost all in Iraq, for periods up to a year or more in President [sic] George W. Bush’s anti-terrorism campaign since 2002, the United States reported last week to the U.N.’s Committee on the Rights of the Child.

U.S. Has Detained 2,500 Juveniles as Enemy Combatants 16 May 2008 The United States has imprisoned approximately 2,500 people younger than 18 as illegal enemy combatants in Iraq, Afghanistan and Guantánamo Bay since 2002, according to a report filed by the Bush regime with the United Nations Committee on the Rights of the Child. 2,400 of the juveniles were captured in Iraq after the U.S.-led invasion in March 2003; 500 are still held in detention facilities in that country. As of last month, 10 juveniles were still being held in Bagram, Afghanistan.

Lori Price is the Editor of Citizens for Legitimate Government, www.legitgov.org.