Home Psychological Operations State Crimes Against Democracy: The Case of 9/11/2001

The six papers in the February 2010 issue are devoted to the recent concept of “State Crimes Against Democracy (SCAD’s),” with emphasis on 9/11 and on how human behavior has failed to recognize its reality. [Ref. abs.sagepub.com/content/vol53/issue6]

For 50 years the American Behavioral Scientist has been a leading source of behavioral research for the academic world. Its influence is shown by the fact that it is indexed by an extraordinary 67 major database services, causing its papers to be widely exposed on the international scene.

“It’s now confirmed that the February edition is available in print, and can be ordered for $24 for the whole issue.

Contact SAGE Journals Customer Service department via e-mail at journals@sagepub.com or phone 1-800-818-7243 then hit #2, then #0 for operator, then ask for “Journals”, and they will mail a copy.

Otherwise individual papers cost $25 to be viewed for one day, on the journal’s website, and cannot be downloaded from it. (Because the pdf could be freely circulated if it were downloadable).”

The publisher, Sage, is headquartered in Los Angeles, with offices in London, New Delhi, Singapore, and Washington DC.

Each issue offers comprehensive analysis of a single topic. 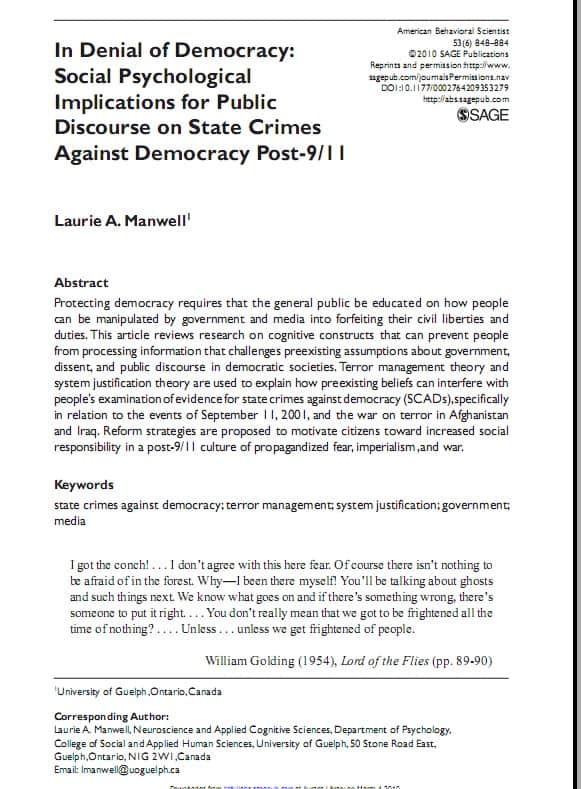 SCADs differ from earlier forms of political corruption in that they frequently involve political, military, and/or economic elites at the very highest levels of the social and political order,” explains one essay.

One paper shows that “preexisting beliefs can interfere with people’s examination of evidence for state crimes against democracy (SCADs), specifically in relation to the events of September 11, 2001, and the war on terror in Afghanistan and Iraq.”

Another refers to TV’s “popular culture passion plays” as “displacing interrogation of real-event anomalies, as with the porous account given by the 9/11 Commission for what happened that fateful day.”

And another deals with “the actual destruction of sovereignty and democratic values under the onslaught of antiterrorism hubris, propaganda, and fear,” in response to 9/11, asking whether the Patriot Acts of 2001 and 2006 are themselves state crimes against democracy.