Dec. 11 — A US Department of Homeland Security program that compiles data on millions of travelers and determines how likely they are to be terrorists may be operating illegally, according to privacy advocates and some members of Congress.

The Automated Targeting System (ATS) gathers travelers’ data from foreign governments, from numerous Customs and Border Protection sources, and from the Passenger Name Record, a controversial system used by the United States and Europe to gather travelers’ information from airlines and travel agencies. 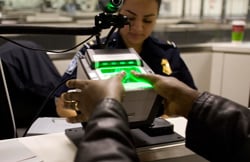 ATS has long been used to track imported and exported cargo. But recent revelations by the Department show ATS is also being used to scrutinize airline passengers and cars entering or leaving the United States. The system draws on the collected data to assign a risk factor to each person or vehicle in order to help border patrol agents decide whether travelers “should receive additional screening because the traveler may pose a greater risk for violation of US law.”

It is unclear how long ATS has been used to screen humans. The DHS announced it had expanded ATS to include monitoring people in a November 2 notice in the Federal Register. However, the Department did not say when the expansion took place and some DHS officials have said the program has been in place for years.

Calling the program “equitable,” the agency said it “uses the same risk assessment process” for all individuals.

The DHS has announced it will keep the personal data gathered by ATS for up to 40 years to “cover the potentially active lifespan of individuals associated with terrorism or other criminal activities.

At least two lawmakers, Representative Martin Sabo (D-Minnesota) and Senator Patrick Leahy (D-Vermont), believe the program violates a provision of the 2007 DHS spending bill. That provision prohibits the testing or development of programs using computerized databases to assign risk to passengers who are not already on watch lists.

The Bush administration insists the program is legal.

Yet, in response to public opposition to the program, the DHS announced it would extend the public comment period from December 4 to December 29. (emphasis added by editors)

In a 30-page privacy-impact assessment about the program, the DHS said it will use the system to identify “suspicious or unusual behavior” using a set of “constantly evolving” rules. The program is being used on both international travelers and people involved in importing and exporting goods.

But the agency also admits there are privacy risks, including inaccurate information used against people who may not be aware that the government is compiling data about them.

In its Federal Register announcement, the DHS states that the system cannot be accessed by individuals wishing to contest the information included about them. (emphasis added)

“This program may be right for cargo, but it’s all wrong for people. Congress has already repeatedly declared that it does not want the government engaging in this kind of mass computerized dragnet,” said the ACLU’s Timothy Sparapani in a press statement. “Now [Congress] needs to weigh in on this program — get to the bottom of what is being done, and reaffirm its views on what should not be done.”

The ACLU said it “appears” that the program also violates the 1974 Privacy Act, which requires public notice of government databases that contain personal data before they can be implemented. The ACLU, along with other privacy advocates, is calling for the DHS to abandon the program.

Yet another federal data-mining program, the “Automated Targeting System,” was recently revealed through publication in the Federal Register. Seems Fatherland Security is compiling a vast array of personal information on each of us who travel, by any means, intends to retain that information in their system for 40 years, and that we are neither allowed to review nor dispute whatever information they may have compiled. After a bit of public outcry during the original comment period, DHS has now extended the period for public comment through December 29, 2006.

The right to travel is a part of the “liberty” of which the citizen
cannot be deprived without due process of law under the Fifth Amendment. So
much is conceded by the Solicitor General. In Anglo-Saxon law, that right
was emerging at least as early as the Magna Carta. Chafee, Three Human Rights
in the Constitution of 1787 (1956), 171-181, 187 et seq., shows how deeply
engrained in our history this freedom of movement is. Freedom of movement
across frontiers in either direction, and inside frontiers as well, was a
part of our heritage.

We have no illusion that even overwhelming response to federal requests for “public comment” will, by itself, shut down this program (though it might force it underground), just as we don’t believe letters to the editor and calling our Congresspersons will, alone, reverse the course of fascism. However, we have always encouraged readers to utilize every opportunity to resist, to make our voices heard, to say “NO!” to the ever-increasing destruction of our civil liberties from every direction. This is one of those opportunities, and we hope thousands of you will comment during the next two weeks. Please forward this piece to your friends and email lists and thus multiply our effect.

Related articles and the comment instructions have been added at the end of this brief article, so you can do thorough research in compiling your comment, letters and phone calls. Please cc your representatives and newspaper editors on your letters–they need to be hearing, loud and clear, that we are absolutely opposed to this (and all) encroachment on our constitutional right to travel freely. They must know that we are NOT among “those who would give up essential Liberty, to purchase a little temporary Safety,” as Benjamin Franklin put it so well!

The ACLU’s comments on the Automated Targeting System can be found at:
www.aclu.org/privacy/gen/27579prs20061201.html

Some discussion on the “right to travel” and “freedom of movement” can be found at:

http://en.wikipedia.org/wiki/Freedom_of_movement and www.usconstitution.net/constnot.html#travel, and discussion the aforementioned Supreme Court decision re. this issue is at

EFF Comments to DHS on this data-mining system

Washington, D.C. – An invasive and unprecedented data-mining system is set to be deployed on U.S. travelers Monday, despite substantial questions about Americans’ privacy. In comments sent to the Department of Homeland Security (DHS) today, the Electronic Frontier Foundation (EFF) asked the agency to delay the program’s rollout until it makes more details available to the public and addresses critical privacy and due process concerns.

The Automated Targeting System (ATS) will create and assign “risk assessments” to tens of millions of citizens as they enter and leave the country. Individuals will have no way to access information about their “risk assessment” scores or to correct any false information about them. But once the assessment is made, the government will retain the information for 40 years — as well as make it available to untold numbers of federal, state, local, and foreign agencies in addition to contractors, grantees, consultants, and others.

“The government is preparing to give millions of law-abiding citizens ‘risk assessment’ scores that will follow them throughout their lives,” said EFF Senior Counsel David Sobel. “If that wasn’t frightening enough, none of us will have the ability to know our own score, or to challenge it. Homeland Security needs to delay the deployment of this system and allow for an informed public debate on this dangerous proposal.”

Earlier this month, EFF’s FLAG Project submitted a Freedom of Information Act (FOIA) request to DHS seeking more details about the ATS data-mining program, but the agency has not yet disclosed the requested information.

Office of the Secretary

SUMMARY: This document provides additional time for interested persons to submit comments on the system of records notice for the Department of Homeland Security, U.S. Customs and Border Protection Automated Targeting System.

DATES: Comments on the Privacy Act System of Records Notice must be received on or before December 29, 2006.

ADDRESSES: You may submit comments, identified by docket number, by one of the following methods:
Federal eRulemaking Portal: http://www.regulations.gov.

Follow the instructions for submitting comments via docket number DHS 2006-0060.
Fax: 202-572-8727.
Mail: Comments by mail may also be submitted to Hugo Teufel III, Chief Privacy Officer, Department of Homeland Security, Washington, DC 20528.
Instructions: All submissions received must include the agency name and docket number for this rulemaking. All comments received will be posted without change to http://www.regulations.gov, including any personal information provided.

Docket: For access to the docket to read background documents or comments received go to http://www.regulations.gov.

To provide expanded notice and transparency to the public, the Department of Homeland Security (DHS), U.S. Customs and Border Protection (CBP) published a Privacy Act system of records notice (SORN) in the Federal Register regarding the Automated Targeting System (ATS) on November 2, 2006 (71 Fed. Reg. 64543). As detailed in the SORN, ATS is the enforcement screening module associated with the Treasury Enforcement Communications System and was previously covered by the Treasury Enforcement Communications System “System of Records Notice.” This system of records is subject to the Privacy Act of 1974, as amended (5 U.S.C. 552a).
The DHS Privacy Office published the Privacy Impact Assessment (PIA) for ATS on November 24, 2006 on its Web site, http://www.dhs.gov/privacy under “Privacy Impact Assessments.” The PIA provides additional background information and context for the SORN, including specific information on measures taken by DHS to protect the privacy of persons whose information might be found in ATS.The SORN referenced above did not identify or create any new collection of information; rather DHS merely provided additional notice and transparency of the functionality of these pre-existing systems. The SORN provided for a thirty day comment period which expired on December 4, 2006.

In response to the SORN published in the Federal Register, and the PIA published on the web, DHS has received a number of comments from the public requesting an extension of the comment period. DHS has decided to grant the request for the extension. Accordingly, the period of time for the submission of comments is being extended. Comments are now due on or before December 29, 2006.