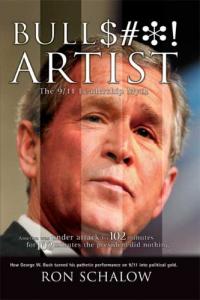 Subtitled “America was under attack for 102 minutes and for 102 minutes the president did nothing: How George W. Bush turned his pathetic performance on 9/11 into political gold,” this book certainly caught our attention.

This 312-page compilation of the Bush crew’s totally inept performance on 9/11 — including their failure to take a single action to prevent it from occurring even when warned — was fascinating even to the eyes of jaded ‘ol BuzzFlash, who monitored the news reports of 9/11 as it happened.

Part of the attraction of “Bullshit Artist: The 9/11 Leadership Myth” is that its citizen-author, Ron Schalow of North Dakota, mixes fact with sardonic commentary and a playful layout. Can it be fun finding out how the Bush Administration is incompetent? Well yeah, in a sort of “all hail to the dunce” perverse sort of way.

Editor’s Note: May 11, 2006: The latest book about 9/11 documents the actions of the president and the formal civilian and military leadership before and during the attacks. They were AWOL. According to the review in Buzzflash.com, author Ron Schalow is not alone in believing the administration displayed an awesome incompetence and negligence, failing to stop a preventable attack and allowing a far worse tragedy on the day itself. These views happen to correspond to the frontier of acceptable opinion. In considering the same data, we arrive at a less charitable conclusion. The way Bush, Rumsfeld, Myers and Winfield (the top four men in the official chain of command) managed to avoid exercising their duties is too consistent. The behavior of Cheney and others, including the planners of the day’s military wargames (which “coincidentally” mimicked every aspect of the 9/11 scenario) is too suspicious. The evasive stories and conflicting timelines after the fact are too obvious. But even if what Schalow automatically terms failures were in fact the product of deliberate intent, we do see the importance of Schalow’s main subject: How the corporate media collaborated outrageously with the administration’s spin doctors in turning the liability of Bush’s Sept. 11th response into an incredible myth of leadership. (nl / 5.11.06)

You realize that the mainstream media is so busy playing its role as royal court transcribers that their reporting lacks the most basic of common sense. Schalow litters “Bullshit Artist” with the basic logic of the common person — and Bush and his minions come off as something like a nefarious version of the Keystone Cops. However, after reading this book, you are left yearning for the Keystone Cops, who would have done a far better job protecting our nation and reacting to 9/11.

Frankly, until we read “Bullshit Artist,” we had forgotten how abysmally clueless the Bushevik government is. Their theme song should be “Don’t Send in the Clowns; We’re Already Here.”

Schalow’s biting, down-to-earth asides remind us that we are the sane ones — and also bring a smile to our face. Schalow confirms — by focusing on the statements by Busheviks about their actions during 9/11 and the factual admissions — that these are dolts of the most extreme variety. Their plea to the man and woman on the street appears to be, “doesn’t everyone have the right to be confused, disoriented, and unable to act?”

Basically, when you finish reading “Bullshit Artist,” you want a real common man as president — not the faux Karl Rove creation. We nominate Ron Schalow, author of “Bullshit Artist: The 9/11 Leadership Myth.” Because when you apply common sense to what happened surrounding 9/11, the “common man myth” of George W. Bush turns into fairy dust. He’s just a smirking fool whose family name was used to put him in a position of power several thousand of times beyond his ability.

And, as a result, every life in the United States has been put in jeopardy.