BRUSSELS – JUNE 25TH, 2008 – For the first time in Europe
some Non-Governmental Organizations and officials are endorsing the United for
Truth platform and will support the second edition of this European peaceful
protest held on September 7th, 2008 at the Schuman Place in Brussels. The platform
is:

In solidarity with the American citizens, we demand an independent investigation
of the 9/11 attacks, which were the pretext for too many wars, lies, and a
serious decrease of (y)our civil rights (“anti-terrorist”-acts,
secret prisons, “Patriot act”, etc). We want European troops back
home! We want European laws that guarantee neutrality of the internet and
that explicitly forbid tracing/chipping (RFID) of human beings as well as
other electronic threats on our freedom. We want democratic and public control
of financial organizations (IMF, WB, etc) and the mass media. But most of
all we want you to get your life back.

The protest will be joined by various citizens from all over Europe. Unlike
last year this protest is now being endorsed by various Non-Governmental Organizations.
The Committee for the Abolition of Third World Debt (CATMD) and ATTAC Brussels,
among other yet to be confirmed organizations, fully support the platform of
United for Truth.

United for Truth made its first public appearance in September 2007, with the
first European protest in Brussels calling to support a majority of the American
people, who want a re-investigation of the 9/11 attacks. This protest is coordinated
by two Belgian artists: Dutch speaking Julez Edward (25) who was the initiator,
associated with French speaking Olivier Durruti (41). They are supported by
ten individuals from various countries across Europe. Together they believe
this year’s protest might bring far more than 200 people to the city center
of Brussels this September.

United for Truth calls upon all supporters to unite and actively put billboards
in the streets and to inform people by distributing flyers. Feel free to contact
us to help out with the organization or with any questions. 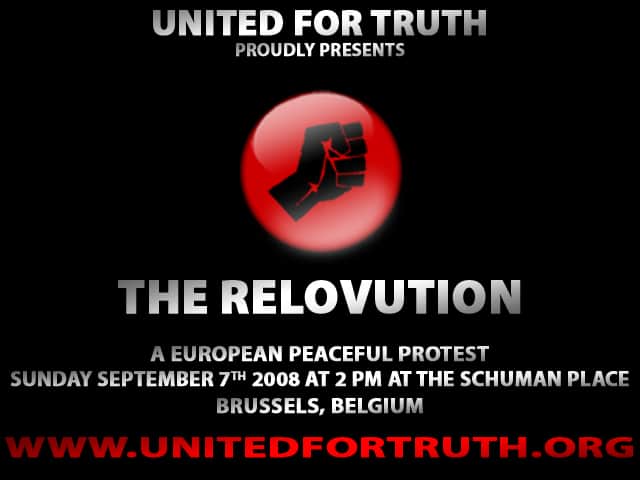 Just like last year this is a "do it yourself" mobilization,
its success depends on YOU!
So
please print/copy billboards and leaflets and hit the streets!

United for Truth is a citizen initiative. A European platform – not an organization
– that unites people, various peaceful non-governmental and non-profit organizations
across Europe. The main goal is to give every citizen the possibility to learn
about the things they cannot learn about via the various mainstream media, and
therefore we organize a pan-European peaceful meeting in front of the Berlaymont
building on the Schuman Place in Brussel on September 7th, 2008. This will be
the ideal place to exchange ideas and to demand answers from those who pretend
to be our European leaders or servants. We believe something wasn’t right about
the way the 9/11 attacks occurred (and several other already historic ‘terroristic’
events). We demand a new investigation. We demand the power to be given back
to the people. We demand you get your life back.

Open letter from the organizers

We are two Belgian artists, a 25-year old producer and a 41 year old percussionist,
who love this planet and our lives. We, and the few people helping us, have
a full time professional life. We think it’s absurd that there are classes,
in which the gaps have grown this extreme, the top class having multiple times
the amount of the Third World Debt on their bank account, while the other class
– to which you probably belong – needs to seek their future in loans and mortgages
in order to have a roof above their head.

This gigantic power at the very top brought a gigantic corruption through the
years, because we – the people – are just way too busy trying to survive. We
are flooded by info, and entertainment, in order to prevent us from seeing what’s
really going on. Through time, this powerful establishment literally hi-jacked
our financial system, our educational system (keep the masses stupid) and certainly
mass media.

On 9/11 2001 this elite, supported by the military industrial complex, crossed
the line once again. In live TV-broadcasts the laws of physics and normal crime
investigation were ignored. Steel frame skyscrapers fell down at nearly free
fall speed and showed all signs of the use of explosives, … let alone WTC7,
the building that wasn’t hit by a plane, and fell down at free fall speed around
5 P.M. The whole reporting was mixed with the immediate accusation of Osama
Ben Laden. But a gigantic cover-up, a falsified and manipulated investigation,
incredibly high WTC insurance claims, and put options indicating advanced knowledge
are facts that were kept from the public. Also, the vanishing of a massive amount
of unpleasant Wall Street investigations as well as the vanishing of files to
a trillion dollar defense scandal that were kept at the destroyed wing of the
Pentagon were evidence that the corporate media failed to mention. However,
the most important result was the effect on you: subconscious fear. Fear of
the new public enemy #1: the Islamic extremists.

This single day brought our ‘Western democracies’ yet one step closer to a
fascistic world regime. The ‘New World Order’, announced by various world leaders,
wants every human to be chipped and monitored, wants to know their every move
and thus control them. They want us to be their imprisoned slaves. Since September
11th the war on terror has been justified by the elite. The wars that followed
have brought private companies from the US and the EU millions of dollars of
profit. They have cost the lives of over 1.5 million innocent Afghan and Iraqi
citizen. These wars more and more seem to be about the protection of opium fields
and pipelines in Afghanistan and the oil fields in Iraq. Together they form
the military strategy for their next move: "bringing democracy to Iran."

While one fights for the abolition of the Third World debt, another one for
safe drinking water, and yet another one for the preservation of the environment,
we believe we can make a difference if we just ‘make a fist’ and condemn the
hierachic system that causes all this: the financial system a.k.a.: those who
have the money, will have more tomorrow, and those who are likely to become
poor, will be poor for sure. We know, if only people start thinking together,
we will find a system that is not destroying the planet in order to have wealth.
We know, if people join forces and unite, if we make ‘that fist’ together, that
very elite won’t be able to execute their plans, because we execute those plans
for them.

This is why we organize a European peaceful meeting in front of the Berlaymont
building at the Schuman Place in Brussels on September 7th, 2008. This will
be the ideal place to exchange ideas and to demand answers from those who pretend
to be our European leaders or servants. If you or your organization endorses
our platform, please contact us. We need all the help we can get.

We strongly reject any form of racism, facism, any form of integrism or extremism
and try to be straight forward, and we believe we are doing a great job in being
Big Brother’s worst nightmare: we think (and act) by ourselves! … What about
you?