The New York Times, on October 17, published a page-one story by Scott Shane about the CIA’s defiance of a court order to release documents pertaining to the John F. Kennedy assassination, in its so-called Joannides file. George Joannides was the CIA case officer for a Cuban exile group that made headlines in 1963 by its public engagements with Lee Harvey Oswald, just a few weeks before Oswald allegedly killed Kennedy. For over six years a former Washington Post reporter, Jefferson Morley, has been suing the CIA for the release of these documents.1

Sometimes the way that a news item is reported can be more newsworthy than the item itself. A notorious example was the 1971 publication of the Pentagon Papers (documents far too detailed for most people to read) on the front page of the New York Times.

The October 17 Times story was another such example. It revealed, perhaps for the first time in any major U.S. newspaper, that the CIA has been deceiving the public about its own relationship to the JFK assassination.

On the Kennedy assassination, the deceptions began in 1964 with the Warren Commission. The C.I.A. hid its schemes to kill Fidel Castro and its ties to the anti-Castro Directorio Revolucionario Estudantil, or Cuban Student Directorate, which received $50,000 a month in C.I.A. support during 1963.

In August 1963, Oswald visited a New Orleans shop owned by a directorate official, feigning sympathy with the group’s goal of ousting Mr. Castro. A few days later, directorate members found Oswald handing out pro-Castro pamphlets and got into a brawl with him. Later that month, he debated the anti-Castro Cubans on a local radio station.

That the October 17 story was published at all is astonishing. According to Lexis Nexis, there have only been two earlier references to the CIA Joannides documents controversy in any major U.S. newspaper: a brief squib in the New York Daily News in 2003 announcing the launching of the case, and a letter to the New York Times in 2007 (of which the lead author was Jeff Morley) complaining about the Times‘ rave review of a book claiming that Oswald was a lone assassin.

(The review had said inter alia that “Conspiracy theorists’ should be ridiculed, even shunned… marginalized the way we’ve marginalized smokers.” The letter pointed out in response that those suspecting conspiracy included Lyndon Johnson, Richard Nixon, Robert Kennedy, and J. Edgar Hoover.) 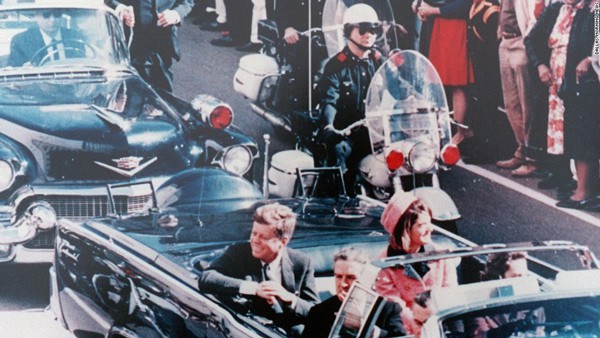 The New York Times has systematically regulated the release of any facts about the Kennedy assassination, ever since November 25, 1963, when it first declared Oswald, the day after his death, to have been the “assassin” of JFK. A notorious example was the deletion, between the early and the final edition of a Times issue, of a paragraph in a review of a book about the JFK assassination, making the obvious point that “MYSTERIES PERSIST.”2

Apparently there was similar jockeying over the positioning of the Scott Shane story. In some east coast editions it ran on page eleven, with a trivializing introductory squib, “Food for Conspiracy Theorists.” In the California edition, headlined “C.I.A. Is Still Cagey About Oswald Mystery,” it was on page one above the fold.

One can assume that the Times decision to run the story was a momentous one not made casually. The same can probably be said of another recent remarkable editorial decision, to publish Tom Friedman’s op-ed on September 29 about the “very dangerous” climate now in America, “the same kind of climate here that existed in Israel on the eve of the Rabin assassination.”

Friedman did not mention JFK at all, and his most specific reference was to a recent poll on Facebook asking respondents, “Should Obama be killed?”3 Four days later the Wall Street Journal expressed similar concern, adding to the “poll on Facebook asking whether the president should be assassinated, a column on a conservative Web site suggesting a military coup is in the works.”4

Friedman’s column broke a code of silence about the threats to Obama that had been in place ever since two redneck white supremacists (Shawn Adolf and Tharin Gartrell) were arrested in August 2008 for a plot to assassinate Obama with scoped bolt-action rifles. Andrew Gumbel’s story about them ran in the London Independent on November 16, 2008; of the fifteen related news stories in Lexis Nexis, only one, a brief one, is from a U.S. paper.

It is possible to take at face value the concern expressed by Friedman in his column. The Boston Globe, a New York Times affiliate, reported on October 18 that “The unprecedented number of death threats against President Obama, a rise in racist hate groups, and a new wave of antigovernment fervor threaten to overwhelm the US Secret Service.”5

But there may have been a higher level of concern in the normally pro-war Wall Street Journal‘s reference to a military coup. Such talk on a conservative web site is hardly newsworthy. More alarming is the report by Robert Dreyfuss in the October 29 Rolling Stone that Obama is currently facing an ultimatum from the Pentagon and Joint Chiefs: either provide General McChrystal with the 40,000 additional troops he has publicly demanded, or “face a full-scale mutiny by his generals…The president, it seems, is battling two insurgencies: one in Afghanistan and one cooked up by his own generals.”6

One can only guess at what led the New York Times to publish a story about CIA obstinacy over documents about the JFK assassination. One explanation would be the similarities between the painful choices that Obama now faces in Afghanistan — to escalate, maintain a losing status quo, or begin to withdraw — and the same equally painful choices that Kennedy in 1963 faced in Vietnam.7 More and more books in recent years have asked if some disgruntled hawks in the CIA and Pentagon did not participate in the assassination which led to a wider Vietnam War.8

Six weeks before Kennedy’s murder, the Washington News published an extraordinary attack on the CIA’s “bureaucratic arrogance” and

obstinate disregard of orders… “If the United States ever experiences a ”Seven Days in May” it will come from the CIA…” one U.S. official commented caustically. (“Seven Days in May” is a fictional account of an attempted military coup to take over the U.S. Government.) [9]

The story was actually a misleading one, but it was a symptom of the high-level rifts and infighting that were becoming explosive over Vietnam inside the Kennedy administration. The New York Times story about the CIA on October 17 can also be seen as a symptom of rifts and infighting. One must hope that the country has matured enough since 1963 to avoid a similarly bloody denouement.

2 Jerry Policoff, The Media and the Murder of John Kennedy,” in Peter Dale Scott, Paul L. Hoch, and Russell Stetler, The Assassinations: Dallas and Beyond (New York: Random House/Vintage, 1976), 268.

3Friedman, in decrying attacks on presidential legitimacy, recalled that “The right impeached Bill Clinton and hounded him from Day 1 with the bogus Whitewater “scandal.” It is worth recalling also that the public outcry about Whitewater was encouraged initially by a series of stories by Jeff Gerth, since largely discredited, in the New York Times. See Gene Lyons, “Fool for Scandal: How the New York Times Got Whitewater Wrong,” Harper’s, October 1994.

6 Robert Dreyfuss, “The Generals’ Revolt: As Obama rethinks America’s failed strategy in Afghanistan, he faces two insurgencies: the Taliban and the Pentagon.” Rolling Stone, October 29, 41. Several other articles entitled “The Generals’ Revolt” have been published since 2003, including at least two earlier this year and a number in 2006, when retired generals’ pushed successfully for the removal of Rumsfeld over his handling of the Vietnam War.

7Gareth Porter, Perils of Dominance: Imbalance of Power and the Road to War in Vietnam (Berkeley and Los Angeles: University of California Press, 2005), 266.

8See for example James Douglass, JFK and the Unspeakable: Why He Died & Why It Matters (Maryknoll, NY: Orbis Books, 2008).