Once again, America is at the Crossroads.

But how do we pick Presidents? The Ballot Box or the TV box?

Watch how TV writes the scripts, directs the action, and casts winners in the most significant elections in the last forty years — 1980 and 2008 — then ask yourself:

“Is this any way to pick a President?”

“This film should be seen by every American in every city and town.” ~ Norman Lear, TV producer and Founder, People for the American Way

“The documentary PBS is too chicken to run…” ~ Washington Post

I’m sure you’ve noticed it. They’re doing it now to John McCain by saying he can’t win. They did it to Hillary Clinton in the primaries when she wouldn’t give in. And they’ve done it in other elections, like when they projected Reagan the winner over Jimmy Carter in 1980 with polls still open from coast to coast. Why can’t they wait for the system to work?

My name is William Shanley, producer of The Made-for-TV Election hosted by Martin Sheen.

Whether you’re supporting McCain-Palin, Obama-Biden, McKinney-Clemente, Baldwin-Castle, Barr-Root, Nader-Gonzalez, are a Republican, Democrat or independent, this is important stuff that strikes at the very heart of our democracy. Questions about: Fairness. Accuracy. Providing an even playing field. Facilitating a well-informed civic discourse. Bringing understanding based on solid investigation and research and reporting on real events and conditions. These are qualities Americans expect from the news media, but in my view, we’re not getting them.

If you think I’m on to something, you’ll want a heads-up about our documentary, The Made-for-TV Election. The film documents TV’s role in casting winners and losers in the 1980 election when Ronald Reagan defeated Jimmy Carter. And now we’re releasing The Made-for-TV Election Redux on DVD that exposes TV’s hand in Election 2008 from the primaries to election night. Two big, history-making elections covered in one never-before-released documentary available on November 15th.

And how are the media events in a 28 year-old election related to what’s happening right now in 2008? Why couple two highly significant elections in one film?

Because the quality of your life today, the value of your money, the cost of your healthcare, the freedom of your thought, and the state of the nation are in many ways a direct result of what the media said in 1980. And I don’t just mean casting winners and losers in their election shows with hundreds of hours of horserace handicapping.

I mean the radical transformation and sweeping redirection of the United States over the last generation’from the privatization of healthcare to criminal justice to national security, to the deregulation of broadcasting, utilities, banking and securities, the evisceration of unalienable rights and the rise of the unprecedented corporate gluttony that characterizes our nation today’all flowed from the myth of a conservative realignment the media told us happened in 1980–a myth that led to Wall Street Rule and is culminating in a very real disaster for America today. 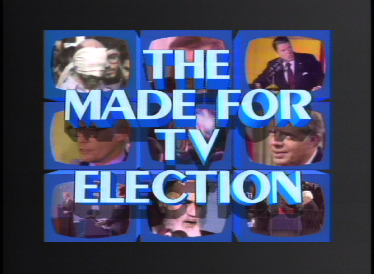 To understand how this happened, how we got into this mess, you’ve got to see the show and understand the trick so you won’t get fooled again. So we bookend the era so you can see the continuity of TV’s effect over a quarter century. Watch how TV networks program contentious bumper sticker sound bites, polls, gaffes, flip-flops, race, sex, two dimensional Hollywood stereotypes and other showbusiness values to create winners and losers in a drama of their own making to pump TV ratings’and distract you from what you need to be an informed citizen and understand what’s really happening in America.

And meanwhile, the grand theft goes on. Howzzaat? Just look at who owns the media today’GE, Time-Warner, Disney, Rupert Murdoch’s News Corporation’multinationals whose interests and buddies are not necessarily yours. Why, they could have told us about the impending subprime tsunami two years ago! Insiders knew it was coming’why not you?

If we start getting real news, created of, by and for the people, perhaps we can turn this financial meltdown into an opportunity to foster a new tomorrow’a new future in which news reporting is free of the multinational media trusts, where we take back our right to issue money from the secret owners of the Federal Reserve, where we operate the healthcare system as a not-for-profit corporation’in short reclaim America’s destiny for the many, not the few.

We can do it because “We the People…do ordain…” Just read our U.S. Constitution. It is we, the citizens, who have the power to create the government and communities the way we want to enhance the quality of life for all Americans. We’ve done it before and we can do again. That’s the promise of America.

And please don’t let the political handicappers devalue your vote on election day. Participate in the real election. Not the made-for-TV election. We invite you to watch ours instead!