The New York Times led the propaganda behind 9/11 and the 9/11 Wars. It did so by ignoring many of the most relevant facts, by promoting false official accounts, and by belittling those who questioned the 9/11 events. The Times eventually offered a weak public apology for its uncritical support of the Bush Administration’s obviously bogus Iraq War justifications. However, it has yet to apologize for its role in selling the official account of 9/11, a story built on just as many falsehoods. Instead, the newspaper continues to propagandize about the attacks while putting down Americans who seek the truth about what happened.

The New York “newspaper of record” has published many articles that promote official explanations for the events of 9/11. These have included support for the Pancake Theory, the diesel fuel theory for WTC 7, claims based on the torture testimony of an alleged top al Qaeda leader, and accounts of NORAD notification and response to the hijackings. Since then, U.S. authorities have said that none of those explanations were true. However, the Times never expressed regret for reporting the misleading information.

Instead, the Times continued to sell every different official explanation. When a new government theory for destruction of the WTC was put forth, it was immediately promoted. The newspaper never reported any critical analysis of the official accounts, despite the fact that all of them, including the final reports for the Twin Towers and WTC 7, have been proven to be wrong.

When the fourth story for how the North American air defenses failed—the one that said U.S. military officers had spent three years giving “false testimony,” the Times pushed it as fact. Its article on the subject simply closed the matter with the statement that “someone will still have to explain why the military, with far greater resources and more time for investigation, could not come up with the real story until the 9/11 commission forced it to admit the truth.” The idea that military officers might have started out telling the truth, thereby leaving very sensitive questions to be answered, and that the 9/11 Commission was now being false, apparently never occurred to the editors.

Meanwhile, the newspaper has made considerable efforts to belittle Americans who question the official account of 9/11.

In June 2006, the Times published a snarky account of a grassroots conference of 9/11 investigators. The article focused on sensational descriptions of the participants, including what it called “a long­haired fellow named hummux who, on and off, lived in a cave for 15 years.’’ The fact that Dr. hummux was a PhD physicist who had worked on the Strategic Defense Initiative for 20 years was not mentioned. The Times simply distorted his experience living with a Native American tribe and falsely stated that he had lived in a cave. No mention was made of serious, undisputed facts that were presented at the conference.

A few months later, at the fifth anniversary of 9/11, the Times published another propaganda article in support of the politically timed reports from the National Institute of Standards and Technology (NIST). The article began by declaring that those who questioned 9/11 were “an angry minority,” while minimizing a national Scripps Howard poll, published just a month earlier. The poll showed that “More than a third of the American public suspects that federal officials assisted in the 9/11 terrorist attacks or took no action to stop them so the United States could go to war in the Middle East.” That is, the number of Americans who thought that federal officials were behind the attacks (36%) was on par with the percentage of Americans who had voted for the president. Yet the Times inferred that it was only a small fraction of the population who questioned 911.

The September 2006 article promoted one Brent Blanchard as a demolition expert, implying that his recent essay refuted any suggestions that the WTC buildings were demolished. As I told the reporter Jim Dwyer, when he interviewed me for the article, “Mr. Blanchard may be a good photographer, but the uninformative bluster that fills the first two and a half pages of this piece, and a good deal throughout the paper, shows that he is not a good writer.” The fact that Blanchard was only a photographer and not a demolition expert was not mentioned by Dwyer, nor was my point-by-point refutation of Blanchard’s limited arguments. Instead, Dwyer purposefully ignored the evidence and ended his article with another quote from Blanchard. 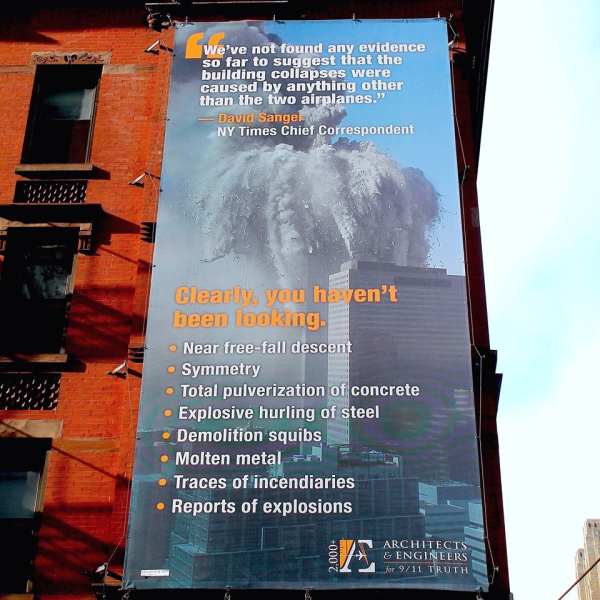 More recently, perhaps in response to another large billboard posted right outside the Times offices, the newspaper has renewed its 9/11 propaganda efforts. In one new article, reporter Mark Leibovich wonders “why is it good to tell the truth but bad to be a ‘Truther’.” Leibovich turns to former White House spokesman Ari Fleischer for support. Of course, the article does not refer to Fleischer’s curious behavior on the morning of 9/11, which stands among the unresolved questions. Instead, Fleischer’s input is that he uses the term “truther” as an epithet (read “truth nigger”), “floating a notion and letting it hang there to absorb sinister connotations.” Leibovich goes on to portray 9/11 questioning as just another form of ridiculous “trutherism” that is “stranger than fiction.“ 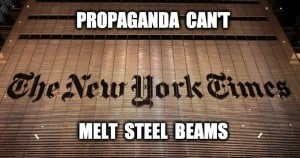 Leibovich and his colleagues at the Times continue to suggest that they are unaware of the many incredible facts about 9/11 that call out for critical investigation. At this point, however, that level of ignorance is not believable and the Times’ track record shows that it will never take an honest and objective approach to the events of 9/11. As one former Times reporter stated, the paper’s slogan that it provides all the news ‘fit to print’ really means that it provides all the news that’s fit to serve the powerful. And as long as the needs of the powerful differ from the needs of the people, the truth will be something that is unavailable at the New York Times.

See related:
Controversy ensues when the BBC announces the Clairvoyant Collapse of Building 7