To say that communication between civilian Air Traffic Control (ATC) and NORAD was abysmal on the morning of September 11, 2001 would be a massive understatement. As an illustration, it took ATC twenty-three minutes to communicate to NORAD that American Airlines Flight 11 had been hijacked,1 and in the case of United Airlines Flight 175, ATC informed NORAD of that flight’s odyssey through northeast skies at 09:03, the same minute as Flight 175 impacted Two World Trade Center!2

Communication between ATC and NORAD in regards to the last two flights hijacked–American Airlines Flight 77 and United Airlines Flight 93–fared worse. In these two cases NORAD wasn’t officially informed of any troubles with those flights until after they had crashed!3 In the case of Flight 77, that flight began deviating from its flight plan at 08:54,4 but NEADS wasn’t informed about Flight 77 until 09:34 when NEADS just happened to be in contact with a Washington Center manager discussing what turned out to be a “phantom” Flight 11 heading south towards Washingon, D.C. During the conversation NEADS was matter-of-factly informed that Flight 77 was also lost. This was the first indication that NORAD had of Flight 77’s troubles … via a chance utterance by Washington Center!5 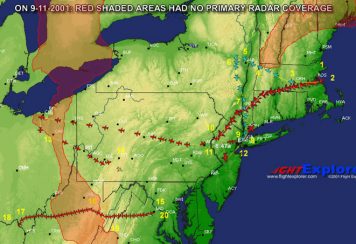 In the official 9/11 narrative NORAD is always on the receiving side when it comes to learning about errant aircraft flying through the skies on the morning of September 11, 2001. This is because the official narrative of 9/11 has NORAD directed, as General Richard Myers told the 9/11 Commission, “looking outward“6 for threats to the continent, not inwards. Since NORAD didn’t monitor air activity within the United States and Canada on September 11, 2001,7 how could it be the first to initiate calls to ATC on errant aircraft? This account of NORAD’s monitoring capabilities on 9/11 is, of course, part of the official narrative of 9/11. The factual narrative on this subject has NORAD with much greater monitoring capabilities than admitted to by the government. With greater capabilities to monitor the skies, we will see that NORAD radar operators were not mere passive recipients of ATC information on September 11, 2001, but active partners in initiating communication with their civilian counterparts.

In previous supplements of The NORAD Papers we learned that the official narrative of NORAD’s capabilities on 9/11 was incomplete. Not only was NORAD tasked to monitor the aerial approaches to the United States and Canada on 9/11, but the defense organization was also mandated to provide “surveillance and control of the territorial airspace“8 (what NORAD calls “Air Sovereignty”) above the United States and Canada. In point of fact, NORAD’s mission to provide “surveillance and control of the territorial airspace” above both signatory nations is actually NORAD’s first mission of three, the other two missions being providing “the NCAs [National Command Authorities] with tactical warning and attack assessment of an aerospace attack against North America”; and “[providing] an appropriate response to any form of an air attack.”9

As pointed out in 1998 by Major Francois Malo of Canada’s Department of National Defense, Canada that year had finally caught up with the United States in its capability to “detect, identify, and if necessary intercept aircraft over Canadian territory“.10 So how did NORAD radar operators on September 11, 2001 identify aircraft flying over our airspace?

On September 11, 2001 NORAD radar operators identified aircraft “flying over our air space”11 by looking through logs of flight plans. “Much of the identifying process is done by hand…Flight plans from the Federal Aviation Administration (FAA) are compiled in logs and have to be manually searched to identify aircraft.”12 A NORAD radar operator would cross check the radar data of an aircraft he/she was watching with information provided by the FAA. If the radar data on the aircraft matched the information provided in the FAA logs, which included the aircraft’s identity, the aircraft was identified. At other times, however, identifying aircraft flying “through our air space”13 entailed, “phone contact with FAA officials about commercial aircraft.”14

Operating under this new information on NORAD’s true capabilities on September 11, 2001, NORAD radar operators on that morning would have initiated phone contact with their civilian counterparts long before ATC contacted them. Once the first flight had deviated from its flight plan at 08:20,15 NORAD would have seen it on radar and have contacted ATC immediately. Instead we are led to believe that for eighteen minutes NORAD radar operators were oblivious to Flight 11’s new flight plan, only learning about the off-course aircraft through ATC notification at 08:38.16


(The endnotes below that refer to the Yale.edu 911Report used to link to the 9/11 Commission Report. I have embedded the pdf above. All page references below correspond to the pdf page of the embedded report.)

Source URL: http://dnotice.org/ DNotice.org provides rigorous analysis of major issues concerning government malfeasance that the media and blogs either ignore, misrepresent or provide superficial analysis of. Our mission at DNotice.org is to analyze each topic (or subtopic) we cover and unravel its true meaning.