Home In the Media The Political Suspicions of 9/11 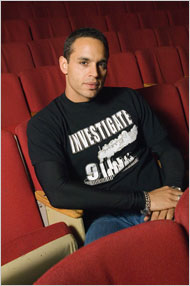 A
coming episode of the acclaimed FX drama “Rescue Me” will tackle what may sound
like a far-fetched plot line: that the attacks of Sept. 11 were an “inside job.”
The actor who espouses the theories on camera, it turns out, also subscribes
to them in real life.

Claims that Al Qaeda terrorists were not solely responsible for the attacks
have a lively following on the Internet, including on YouTube, but the second
episode of “Rescue Me’s” fifth season, starting in April,
may represent the first fictional presentation of 9/11 conspiracy theories by
a mainstream media company (FX is operated by the News Corporation).

“They’re not discussed a lot in the press,” Daniel Sunjata,
the actor who plays Franco Rivera on “Rescue Me,” told reporters
at a television press tour last month. He predicted that the episode would be
“socio-politically provocative.”

In the episode, Mr. Sunjata’s character delivers a two-minute monologue
for a French journalist describing a “neoconservative government effort”
to control the world’s oil, drastically increase military spending and
“change the definition of pre-emptive attack.” To put it into action,
he continues, “what you need is a new Pearl Harbor. That’s what
they said they needed.”

Mr. Sunjata surprised some of the TV reporters when he said that he “absolutely,
100 percent” supports the assertion that “9/11 was an inside job.”

The alternative theories “seem to me to make a lot more sense than the
ones that are popularly espoused,” he said, calling it admirable that
the conversation was allowed within “Rescue Me.”

Peter Tolan, an executive producer, said Mr. Sunjata is “well read”
and has “done a lot of research.”

“Look, obviously not all of us buy in,” he told reporters. “But
we went: ‘Wow, that’s interesting, and he’s passionate about
it. Let’s use that.’ “

Sept. 11 has been a touchstone for the series, which is set in a New York City
firehouse. Denis Leary, who plays the lead character, said Mr. Sunjata’s
character creates a rift among the fictional firefighters. Similar scenes have
played out in actual firehouses in New York, he said, “where some of the
younger members don’t even have to completely buy into the theory of 9/11
being an inside job, but want to discuss it.”