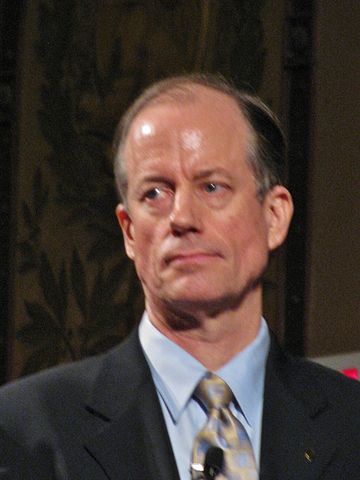 Thomas Drake worked for the National Security Agency before he was indicted by it. Drake felt that taxpayer money was being misused on unnecessary intelligence, not the information that would lead to the successful capture of terrorists.

While the government says he betrayed his country, Drake, facing 35 years in prison if convicted, says he only pointed out government mismanagement. Drake was imprisoned under the Espionage Act of 1917.

“The entire national security establishment — it was a failure, a fundamental systemic breakdown,” Drake told “60 Minutes”‘ Scott Pelley in his first televised interview.

Watch the full interview below, which originally aired on “60 Minutes” on May 22, 2011, embedded courtesy of CBS.

WASHINGTON — Five years after becoming the first American to be charged for espionage in nearly four decades, Thomas Drake is still trying to rebuild his life.

In 2010, Drake, a senior executive with the National Security Agency from 2001 to 2008, was indicted under the Espionage Act by Barack Obama’s administration for leaking classified information, after speaking out on secret mass surveillance programs, multibillion-dollar fraud and intelligence failures from 9/11. He was the first U.S. whistleblower to be charged under the Espionage Act since Daniel Ellsberg in 1971 and faced 35 years in prison before the government’s charges against him were ultimately dropped in 2011.

“I had become a dissident, as far as the NSA was concerned,” Drake said during “Secret Sources: Whistleblowers, National Security and Free Expression,” a panel examining the impact of the Obama administration’s response to national security leaks, at the Newseum in Washington, D.C. “If you become a dissident, the white blood cells kick in, culturally, to get rid of you.”

And Drake, much like fellow NSA whistleblower Edward Snowden, remains a case study of sorts for the present and future of whistleblower protections in the U.S.

A new report published this week accused the U.S. government of not doing enough to protect whistleblowers. According to the report, which was authored by a group of writers from PEN America, found that “at least 57 U.S. federal laws with whistleblower or witness protection provisions” are not consistent and potentially undermine any efforts from possible whistleblowers.

The report comes on the heels of presidential candidate Hillary Clinton saying at last month’s Democratic debate that Snowden “could have gotten all the protections of being a whistleblower” instead of leaking to the press. But the report outlined how that notion is false and U.S. law leaves government employees and contractors with little wiggle room to avoid prosecution, even if they go through sanctioned channels.

“Thomas Drake is exhibit A of someone who goes through all the appropriate channels,” said Jesselyn Raddack, a national security and human rights lawyer and the director of ExposeFacts’ whistleblower and source protection project, during the panel.

This week, America Tonight caught up with Drake to discuss the PEN report, the weight of the burden taken on by whistleblowers and how his life was rocked in the last few years. Answers have been edited for brevity and clarity.

On the findings of the PEN report: Probably the biggest takeaway for me is it’s one of the first reports that actually pulled this information all together in a cogent fashion. It gives a history. It shows the dynamics. It shows how things have evolved. It shows how far the administrations, particularly President Obama, have gone in pursuing those who would dare hold up a mirror to power. It talks about the lack of protections for sources. It highlights the risks to journalism, as sources, like myself, are considering engaging in criminal activity. It raises serious questions, extraordinarily disturbing questions, about the government.

The irony of it, in my own case, was that the media was largely my saving grace. The media began to put a spotlight on what was happening. What’s at stake here is free press, to conduct aggressive journalism when dealing with very sensitive topics. National security has an extraordinarily overwhelming influence right now, and it tends to get what it wants. There really is no limit in terms of how much security you want. You want a perfectly secure society? Then I have to give up all rights and all freedoms, but what does that look like? I can play that game, the what-if scenarios. What if? What if? What if? Is it really worth it?

We need a robust press, because that’s the foundation of our form of government and the foundation of any free and open society. But what we’re seeing is a very disturbing trend, as there’s a much more autocratic presence that’s exerting itself. It’s a control mechanism that’s born out of fear, and I think it speaks, very disturbingly, to the darker sides of the human condition.

On the burden of being a whistleblower who talks to the press: The burden is huge. My act was a singular choice I made. I spent several months pondering this, even before the stories came out. I knew I’d end up in a criminal investigation. Why? Because so few people knew about the secret mass surveillance regime, those who did know about it or had been associated with it, they’d be fingered as possible sources automatically. I had to weigh what’s in the public interest, because this was for history. So I made contact with a reporter, but in doing that, I put everything at risk, literally — my entire life, my family, ability to earn a living, current livelihood, my pension, my job. And ultimately, my own freedom and liberty was on the line. I knew that then.

I didn’t have an attorney at the time. I didn’t have anyone representing. I now tell people that before you decide to blow the whistle or leak to the press in the public interest, make sure you hire a really good attorney or an advocacy or support group. Life is going to change in ways you may not have fully imagined or appreciated. In some ways, I’ve acknowledged I’m a case study in this. It comes back to “Why did you do it?” Well, all of this is being done under the mantle of national security. All of this is being done ostensibly for us to keep us safe, but we don’t know about it, not debating it and not being informed. For me, it came down to, after four-plus years of threats, how far the government gave itself extraordinary license to do whatever it felt like. And I decided to take a stand.

The real bottom line was — and I speak about this a lot, how my context is my own country’s history. In the United States, people forget about what happened after the American Revolution. Even Americans forget that [President James] Madison, who’s considered the father of Constitution, had to basically invent and imagine the Constitution, because he was faced with this fundamental question, How do we best govern ourselves? It’s the fundamental question.

I don’t think the grand experiment of the Constitution has run its course. It’s part of that long arc of history, and Martin Luther King Jr. was correct in that it does bend toward justice. What’s happened since 9/11 hasn’t bent the arc toward justice. It’s bent it the other way. I don’t want to live in that kind of society.

On how the fallout affected his personal life: Years and years of associations, social networks, people I got to know over time — all of that is gone. [In July, Drake talked about how he now works at an Apple store in Maryland.] They’re just gone.

I had family questioning me. There were serious reservations from people about who I was. I had one person who I worked with who said, “I don’t know you anymore.”

You’re also putting a huge burden on your family. The FBI raided me. I was no longer earning an income, and I went from senior executive to wage grade. I was headed for divorce. All these dynamics were in play. There are a lot of prices paid by whistleblowers. I became, essentially, broken and practically bankrupt. The court declared me indigent for two years. I went through all of my liquid assets. I couldn’t pay for my own attorney, and I was appointed public defenders. And I was facing the prospect of going to prison for many decades. So yeah, it’s an extraordinary burden.

On where he is now in life: I’m in a much better space. I’ve had to essentially create a whole new life. On the outside, it looks very similar, but it’s a very different kind of life.

Me personally, I’m the same kind of person, but I’m fiercely devoted to defending life, liberty and the pursuit of happiness. That’s where I’m at right now. Going through this ordeal sort of burns off anything that doesn’t really matter. When you’re facing the prospect of winding up in prison over many years because you chose to defend a piece of paper against your own government and are declared an enemy of the state and turned into a criminal, let’s just say you really, really focus on the core of existence. What are those things that make up the essential nature of being a human being and to be alive? All the rest disappears.

The worst period, frankly, was the year-plus after I was raided. There are all these unknowns, and you know you’re behind all these eight balls. I was doing the 1,000-yard stare. It was sort of a trauma thing. I can now identify with those who go through post-traumatic [stress disorder]. I don’t talk much about it. I had to deal with it. I had people in my life checking in to see if I was OK. It was never a question about whether I’d get to a point where I was so depressed I might do something else. I wasn’t close to that. But it was a very lonely existence.

There was an extraordinary group of people who came to my defense. Jesselyn [Raddack] was my voice when I had none. She fiercely defended me in the court of public opinion when no one else did. It emphasized what mattered because of what was at stake. Of course, my own future was at stake.

And yes, I also created that situation by virtue of what I did, and I take full responsibility for having ended up there because of what I did.