Home CIA Torture, Murder, Bush, Kissinger and The Mothers of the Disappeared in Argentina:...

For some 30 years, the Argentine women known as the Madres (Mothers) de La
Plaza de Mayo have marched every Thursday in front of the Presidential Palace
of Argentina. They gather in memory of their children and grandchildren, who
were among the estimated 30,000 people who disappeared during “Operation
Condor.” Another 50,000 people were murdered. 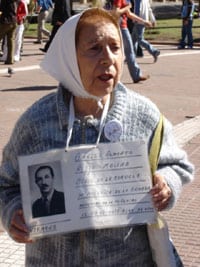 (image: One of the Madres (Mothers) de la Plaza de Mayo displaying a photo of her son who was one of an estimated 30,000 “disappeared” during “Operation
Condor.” BuzzFlash
photo taken on October 5, 2006)

“Operation
Condor” reached its peak in the 1970s. With assistance from
the United States, and the support and knowledge of Henry Kissinger, five of
the southern cone South American nations conducted a campaign of unspeakable
torture and killing against their own citizens.

When you look at the photos carried by many of the Madres de La Plaza de Mayo,
you see middle class men in suits and ties and nicely dressed women. You see
young children with smiling faces.

What happened during Operation Condor is so horrific — all done in the name of the safety and security of “the nation” — that it is barely speakable. The torture included one of the Bush Administration’s favorite techniques — waterboarding — and many other methods. Families were forced to watch or listen to their love ones being mutilated. Friends were required to conduct torture on those that they knew. Pregnant women were allowed to stay alive until their babies were born, then they were murdered. Their children were given to military families who adopted them.

In a New Yorker article a few years back, a former member of the Argentinian military recalled flights over the Atlantic where drugged and bound Argentinians, whose interrogation was finished, were thrown alive into the ocean. Bodies of the already killed were dumped into the Rio de la Plata, which divides Argentina and Uruguay.

Many Americans will say that this horror cannot happen in the United States, but they are wrong. Legally, as a result of the legislation passed in September, it is now quite possible.

As was the case in Argentina, America now allows the President or his designate to declare a person an “enemy combatant” (or enemy of the state) without any judicial process. In short, a person becomes an “enemy of America” on the mere basis that Bush or his designate says so.

The fundamental problem with such power is that it allows tyrannical authority to detain anyone, without the right of habeas corpus, on the mere whim or suspicion of the executive branch of government. No one will be informed of the detention, no court will review it, no recourse will be allowed the relatives or friends of the detained.

They will become the new “disappeared,” as many foreigners have already become in the CIA gulag of secret prisons, and the not-so-secret jails in Iraq and Afghanistan.

The new law is vague enough that the Bush Administration, which drives a Mack truck through loopholes or openly disregards congressional laws, can justify arresting American citizens it simply declares are providing support to those it declares are enemies of America.

It is “Operation Condor” all over again.

What one must remember about “Operation Condor” and Gitmo, for example, is that they were basically horrifying fishing expeditions. One did not need to be guilty of anything. One was adjudged guilty merely because a state authorized agent declared one so. In “Operation Condor” — as at Gitmo — the vast majority of people were detained and tortured merely on the suspicion that they might have some knowledge of value. And if they didn’t, it was their bad luck — and their detention would be a sacrifice paid for the “security of the nation.”

It is not a large leap — however much Americans would like to think otherwise — from the summary arrest, torture and occasional murder of foreigners to applying the same process to residents of the United States. Suspicion or politically-motivated accusations of the government become equivalent to a sentence of guilt. Bush has already declared persons who disagree with his Iraq policies “tools of the terorrists.”

To those who say that the recently passed legislation may allow Bush to authorize torture as he deems fit, but that it prohibits murder, we have two words: Abu Ghraib. How quickly we have forgotten that a number of detainees at Abu Ghraib were tortured to death, with no one in the Bush Administration held accountable.

One cannot fully control torture as if it were a thermostat. When you start down the road of torture, people are going to die accidentally. And then when the culture of torture becomes ingrained in the military, people will start to be murdered. It is hard to contain torture; it is impossible to just torture the “guilty.” Soon, it becomes — as it did in “Operation Condor” — a nightmare combination of “trolling” and “cleansing” the political opposition.

In such an environment, torture is the first step on a descent into state-authorized murder to achieve political goals, not necessarily “national security.”

The mothers of the disappeared, clutching photos now more than three decades old, know this truth.

It is said, in Bob Woodward’s book “State of Denial,” that Henry Kissinger is now privately advising Bush and Cheney on the Iraq War.

It was Henry Kissinger who brought us a prolonged war in Vietnam, the bombing that led to the Khmer Rouge massacre in Cambodia, the death squads in Central America, the East Timor slaughter, and Operation Condor — among other potential war crimes.

It is not a coincidence that he has allegedly returned as an advisor to Bush and Cheney on the debacle in Iraq — and perhaps on other matters. Kissinger believed and believes that murder in the name of some vague notion of “American supremacy” is justified (although he won’t publicly acknowledge it). More than 80,000 victims of Operation Condor are murdered testaments to his worldview. (Kissinger will not travel to several nations, including France, because he would face judicial questioning in these countries about his role in Operation Condor.)

He now has the ear of a man who has been given Operation Condor-like authority. Yes, it is true that murder per se is not sanctioned in the new Congressional legislation; but how would we know if someone has been murdered if we are not told why or by whom they have been detained?

That is how the children and grandchildren of the Madres de La Plaza de Mayo came to be “los desaparecidos.”

The mothers and fathers who march in Plaza de Mayo each Thursday are now senior citizens. Their losses are three decades behind them, but still they demand accountability for the nightmare of abduction, torture and death that gripped their nation and the surrounding countries of Uruguay, Paraguay, Chile and Bolivia.

When the mothers first began marching, Operation Condor was still in place. So it followed that some of them, including the founder, “disappeared” because they demanded the right of habeas corpus for their loved ones.

It is early October and the beginning of spring in the Southern Hemisphere. “Operation Condor” appears a distant memory amidst the bustling city of Buenos Aires. Trees and flowers are blossoming. Lovers openly embrace and kiss in the many parks. It is the annual time of seasonal renewal in Argentina.

For some nations, their long nightmare of people being declared “enemies of the state” by faceless men, then tortured and killed is over.

For the U.S., the long nightmare of the disappeared is just beginning to take shape. 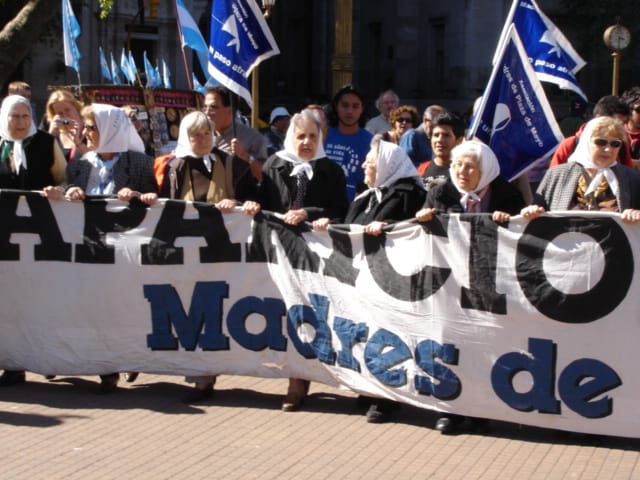 Each Thursday afternoon, the mothers of los desaparecidos (the disappeared) march in the Plaza de Mayo in front of Argentina’s presidential palace. (BuzzFlash photo taken on October 5, 2006)