Once again, Attytood gives you tomorrow’s news today. This is our story that will run on the front page of the Daily News, looking at a few of the unanswered questions that may get lost in the hoopla about the opening of the movie “United 93”:

Virtually everything that is known about United Flight 93, the hijacked jetliner that crashed into a coal field in western Pennsylvania, has been put into the new Hollywood feature film about the doomed voyage.

Director Paul Greengrass not only relied on known transcripts and accounts of real conversations that took place during the Sept. 11, 2001, drama, but he even used some real pilots, crew and flight controllers in filming “United 93.”

“They also believed, as the families believed, that making this film an accurate account – not a conspiratorial effort – would help us,” Greengrass told the Boston Herald recently. “It gave the film a veracity, an authenticity.”

But while Greengrass tackled everything known about the flight — which the government believes was crashed on purpose by its four al-Qaeda hijackers because of the uprising by passenger who’d learned of the crashes at the World Trade Center — there were things the movie could not address.

Those are the unknowns of Flight 93. 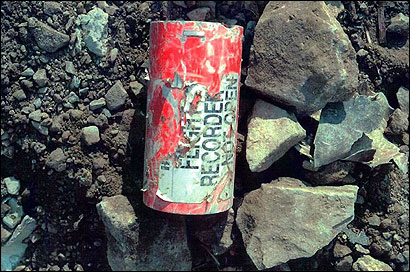 Today, few but the most radical sceptics about 9/11 would question the events at the core of “United 93,” the struggle with heroic passengers that was captured on the cockpit voice recording played in a Virginia courtroom earlier this month.

But other questions remain — most notably about the government’s response. Why was the hijacked jet not intercepted by the military jets that had been sent aloft after the Trade Center strikes? Did either President Bush or Vice President Dick Cheney order a shootdown as the plane neared Washington, and why didn’t it happen?

“Unfortunately, we have yet to have a serious and honest investigation into what happened on 9/11,” said Paul Thompson, the author of “The Terror Timeline: Year by Year, Day by Day, Minute by Minute.” Thompson believes that officials should still be held accountable for what he considers a flawed military response.

Here’s some of the unanswered questions:

Q. Why weren’t military fighters under the command of the North American Aerospace Defense Command, or NORAD, able to intercept the doomed Flight 93?

A. Ever since 9/11, Pentagon officials have insisted that NORAD was geared toward a foreign attack and not set up to deal with a domestic hijacking, but there is considerable evidence to contradict that. In fact, the 9/11 Commission found that NORAD had been planning for a June 2002 exercise called Amalgam Virgo 2 that involved a scenario with two simultaneously hijacked planes.

NORAD also told the 9/11 Commission that it hadn’t been informed of the Flight 93 hijacking until it was much too late to respond. However, NORAD Commander Larry Arnold told an author in 2004 that, “We watched the 93 track as it meandered around the Ohio-Pennsylvania area and started to turn south toward DC.” That was some 27 minutes, or more, before Flight 93 crashed in Shanksville, Pa.

In defending its actions, NORAD has said that it launched its remaining F-16 fighters from Langley Air Force Base in Virginia at approximately 9:30 a.m. — roughly 33 to 36 minutes before Flight 93 crashed — but after another hijacked jet had struck the Pentagon, the fighters were needed to defend the perimeter of Washington.

Q. Did high-ranking officials from the Bush administration order fighters to shoot down Flight 93, and did President Bush know about it?

A. The 9/11 Commission said that it was around 10 a.m. when Cheney — running the White House command center because Bush had been speaking at a Florida elementary school — was told that a hijacked plane was 80 miles away and was asked for military authority to shoot it down.

Joshua Bolten, the aide who is now White House chief of staff, testified he suggested that Cheney re-confirm that order with Bush, and the two top officials and other aides said such at call was made.

But according to a June 24, 2005, article in Newsweek, “some on the [9/11] commission staff were, in fact, highly skeptical of the vice president’s account and made their views clearer in an earlier draft of their staff report. According to one knowledgeable source, some staffers ?flat out didn’t believe the call ever took place.'”

Some have even speculated this issue is why Bush and Cheney took the unusual step of testifying jointly to the 9/11 Commission.

Q. Who was flying the fast-moving, low-flying white jet that was seen by a dozen or more Shanksville residents just seconds after Flight 93 crashed?

A. One of those dozen witnesses was Susan McElwain, who told Britain’s Daily Mirror in 2002: “It had two rear engines, a big fin on the back like a spoiler on the back of a car and with two upright fins at the side….It definitely wasn’t one of those executive jets.” Several residents said the plane resembled the military’s A-10 Warthog.

After several different accounts, the government and a supporting 2005 article in Popular Mechanics said the mystery jet was a Dassault Falcon 20 business jet owned by the VF Corp., a North Carolina clothing firm. The magazine said the jet was descending into the Johnstown Airport and circled the crash site at the request of the Federal Aviation Administration.

A. The transcript from the cockpit voice recorder ends at 10:03:09, which is when the government says it crashed.

But in 2002, the world’s best known forensic seismologist, Terry Wallace, told the Daily News that the evidence was conclusive that the plane crashed nearly three minutes later, at 10:06:05. Wallace now works for the government’s Los Alamos National Laboratory, and efforts to reach him yesterday were not successful.

A. On Sept. 11, it was widely reported that one of the Flight 93 passengers, believed now to be Edward Felt, reached a 911 operator in Westmoreland County, Pa., and that, “He heard some sort of explosion and saw white smoke coming from the plane and we lost contact with him.”

Since then, that account has been disputed and the 911 operator has been barred from speaking to reporters.

Q. Why haven’t we heard cockpit recordings or seen the flight data recording from the other three flights?

A. Government agencies have insisted that the “black boxes” (actually orange) found at the Pentagon were too badly damaged while the four in New York were never recovered, which was a first.

However, the Daily News reported in 2004 that two Ground Zero rescue workers claimed they helped the FBI recover three of the four “black boxes” there. Last year, Philadelphia freelance writer Dave Lindorff reported a National Transportation Safety Board source told him: “Off the record, we had the boxes. You’d have to get the official word from the FBI as to where they are, but we worked on them here.”