9/11 Families Uproar Over the 28 Pages: The Saudi/CIA Connection?

Tom Kean and Lee Hamilton wrote an opinion piece last week in USAToday, trying to “temper” feelings surrounding the release of the 28 pages.

Kean and Hamilton wrote, “The 28 pages have generated a lot of public speculation over the years and have been described as a “smoking gun” implicating the Saudi government in the deadliest terrorist attack carried out on U.S. soil.”

They go on to write, “What often gets lost in those theories is that the 28 pages were based almost entirely on raw, unvetted material that came to the FBI. That material was written up as possible leads for further investigation, and the 28 pages were a summary of some of those reports and leads as of the end of 2002 — all of them uninvestigated.”

What Tom and Lee fail to acknowledge is the reason the “raw, unvetted material” was left “uninvestigated” was strictly because of the 9/11 Commission’s Staff Director, Philip Zelikow.

Zelikow has too many conflicts of interest to list in this blog. Suffice it to say that a critical portion of the 9/11 Commission’s Final Report can be seen as merely a fairy-tale rendition (or intelligence “story”) of Philip’s design. (Scroll down to the lunch break, read Zelikow’s next Staff Statement where he talks about an “intelligence story.”)

Indeed, chapter 5, “Al Qaeda Aims at the Homeland,” and chapter 7, “The Attack Looms,” provide most of the vital pieces of information surrounding the 9/11 plot by citing Khalid Sheikh Mohammad’s interviews as their primary source. Why would any laudable historian (who Zelikow professes to be) base an official accounting of the worst terrorist attack since Pearl Harbor on the bogus ramblings of a detained, tortured terrorist? That’s why anything and everything that comes out of Zelikow’s mouth should be questioned for its veracity — and motive.

After all, if the person in charge of torturing KSM wanted to obscure the Saudi role, is it a surprise that KSM would say what his torturer wanted to hear? Moreover, is it a surprise that the person or persons in charge of KSM’s torture, who wanted to obscure the U.S. government’s awareness of the threat and indeed specific knowledge of many of the terrorist activities before the attack, would elicit a story consistent with that goal?

Indeed, regarding the 9/11 Commission’s treatment of the Saudi role in the 9/11 attacks, Zelikow’s hands are easily found. Look at three items. First, Zelikow blocked and then fired Dana Lesemann when she tried to investigate the uninvestigated leads in the 28 pages. Where were Tom and Lee when this happened? Second, it was only Zelikow and Dieter Snell who were granted access and able to question Omar Bayoumi—a man who stands at the epicenter of the Saudi nexus to the 9/11 attacks. Why were Zelikow and Snell the only ones permitted to interview such a key individual? Finally, it was Zelikow and Snell who “re-wrote” the entire Saudi section of the 9/11 Commission’s Final Report — leaving out all the damning, incriminating information. Where is that missing information today? Available for public review?

So please, when Tom and Lee say that they “found no evidence linking the Saudi’s to the 9/11 attacks,” pay careful attention to the cute use of their words, “found no evidence.” Because while concededly there may not then have been conclusive proof, there were certainly indications and evidence that required further and immediate follow-up. 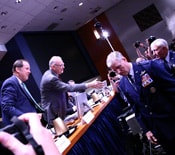 In addition, note when Tom and Lee talk about access granted to the 28 pages being given to “relevant” staff. Which staff were deemed relevant? And who decided what staffers were “relevant?” Zelikow? Everyone had clearance, so why didn’t all investigative staff have access to the 28 pages?

Tom and Lee also proudly state that their report is unclassified and available to the public. What you need to realize is that while their final report is unclassified, the source documents for that report remain classified and hidden from the public. In short, unlike redacted reports where you can readily see what is being kept secret by the dark lines crossing out words, with the 9/11 Commission’s Final Report, we’ll never know how much other pertinent information was kept out and classified by Zelikow. And, as someone who has looked for specific documents on the National Archives website, I can state emphatically that many of the 9/11 Commission’s most vital and damning documents remain redacted, withheld, classified and/or unavailable to the public.

Moreover, please pay attention to how Tom and Lee characterize the 9/11 Review Panel. Realize that the 9/11 Review Panel did nothing more than tie up the loose, uncomfortable (i.e. damning) ends that would inevitably be created with the release of the 28 pages. Was the Panel’s purpose to uncover the entire 9/11 story or to stop further inquiry that would eventually uncover the entire truth?

Finally, I do agree with one section of Kean and Hamilton’s editorial, “The 9/11 attacks were the worst mass murder ever carried out in the United States. Those responsible deserve the maximum punishment possible. Therefore, accusations of complicity in that mass murder from responsible authorities are a grave matter. Such charges should be levied with care.” 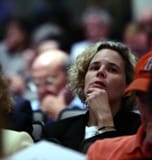 I just hope that both Kean and Hamilton mean what they say when they talk about those responsible and complicit in the 9/11 attacks “deserving the maximum punishment possible.” And I hope their definition of complicity is as broad as mine, by including actions before and after the crime and actors from inside and outside the United States.

So for example, let’s just say that our CIA (or a rogue element of it) tried to recruit two 9/11 hijackers in San Diego who were already in contact with Saudi agents. And in carrying out that task, the CIA worked with those Saudi agents in the recruitment process. And thus, all the Saudi contacts and support for the hijackers detailed in the 28 pages (the so-called “smoking gun”) necessarily reveals the CIA/Saudi cooperation in dealing with those two 9/11 hijackers. Incidentally, this might explain why CIA Director, John Brennan, has joined the chorus in stating that all information released in the 28 pages is “uncorroborated, unvetted information.”

Will Kean and Hamilton support holding the CIA officials accountable? Will Cofer Black and James Pavitt be held accountable? George Tenet? John McLaughlin? What about John Brennan? Or Michael Hayden? Bob Mueller? Richard Clarke? Too late for Sandy Berger(and those docs he stuffed in his socks), but what about Clinton? Bush? Cheney? Rice? And, Obama? How about Zelikow and all others who have known the truth for years and kept silent? When Kean and Hamilton say complicity is a “grave matter,” I hope they follow through on their word.

Clearly, much will depend on how good a job was done by the 9/11 Review Panel. But, putting that aside, I certainly hope the U.S. government does not expect the 9/11 families to ignore fifteen years of their cover-up and capitalized “opportunities” in the wake of the 9/11 attacks. (Quoting Condi Rice here in the immediate wake of the 9/11 attacks where she said, “how can we capitalize on these opportunities” — that’s right, she called the mass murder of 3000 innocent people an “opportunity” that should be “capitalized upon”).

Recently, we’ve seen that even though decades have passed since Dennis Hastert committed his despicable deeds, he was eventually caught and held accountable for the cover-up of those deeds. To me, this demonstrates that the truth will always emerge.

Fifteen years after the 9/11 murders, we have uncovered a part of that truth, let us hope it does not take another fifteen years for the whole truth to emerge. Rest assured, we will never give up nor will we ever go away.

Statement from Executive Committee of NYC CAN

Inside the Saudi 9/11 coverup

9/11 responder: Coburn ‘should be ashamed’ for blocking health bill