On Saturday, November 15, at 8:00 am, at the National Archives Building on
Connecticut Ave., eight military veterans and a military mother climbed a 9-foot
retaining fence and occupied a ninety-foot high scaffolding to raise two 450
square foot banners stating, “DEFEND OUR CONSTITUTION. ARREST BUSH AND
CHENEY: WAR CRIMINALS!” and “WE WILL NOT BE SILENT.” The same
message will also be displayed at demonstrations in the Los Angeles area on
Saturday.

Members of Veterans for Peace (VFP) chose the Archives for their nonviolent
protest because it is symbolic of their military oath to “defend the Constitution
of the United States against all enemies, foreign and domestic.” In September
they occupied the Archives for 24 hours, and plan to stay longer this time. 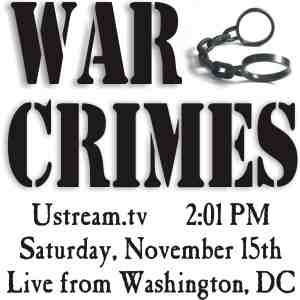 “The offenses of Bush, Cheney, and their accomplices are appalling,”
said Kim Carlyle, a VFP member and Army veteran. “Their misdeeds have killed
or maimed more than a million people – American soldiers, innocent civilian
children, women, and men. They have displaced almost five million people, with
millions seeking refuge in other countries. Their total disregard for international
agreements has severely tarnished the reputation of America in the world. Their
unlawful wars have squandered billions of dollars that could have bolstered
a troubled economy.”

The veterans are demanding Bush administration be tried for war crimes, crimes
against humanity, and crimes against peace; asking the media to clearly inform
the public of the administration’s crimes; and encouraging citizens to take
similar nonviolent actions.

According to Tarak Kauff, a VFP member, “People say Bush and Cheney
will be gone soon so what’s the point? The point is, there is no statute of
limitations on war crimes, and if not held accountable, criminality will continue
regardless of who is in office. We either are or we are not a nation of law.”

THOSE STAGING THE OCCUPATION ARE:

Military Families Speak Out is an organization of people opposed to the
war in Iraq who have relatives or loved ones currently in the military or in
the military since the fall of 2002. Formed by two families in November of 2002,
MFSO membership now numbers over 3,400 military families, plus contacts throughout
the U.S. and other countries.

MORE ON THIS STORY:

UPDATE
4 p.m. Saturday: Activists plan to remain through Monday morning at least, if
not longer. They lost the really big “Arrest Bush and Cheney” banner
to wind but have a smaller version and still have the “We Will Not Be Silent”
Banner. The Archives security chief, Mr. Adams, spoke with Elliott Adams of
Veterans for Peace and offered to not press charges if they left and threatened
to have arrest warrants issued for them all in 2 or 3 weeks if they did not
get down immediately. They chose to stay, and Elaine Brower of Military Families
Speak Out got on the PA system to announce their intention to make sure that
Bush and Cheney are arrested for murder. She told her son’s story and began
reading the names of the dead. Also, the similar action in Santa Monica is going
well.

This was the second time that a group of veterans opposed to illegal wars and
in favor of the rule of law had taken over the National Archives building in
Washington, D.C. The first time, several weeks ago, a group of them had climbed
onto a ledge on the front of the building with flags and banners. This time,
they aimed higher.

Mike Ferner gave me a report over the phone at 2:30 p.m. on Saturday. He said
that at 7:45 a.m. he and others had arrived at the Constitution Avenue side
of the Archives. There had been no police presence on this side because the
Pennsylvania Avenue side had been swarming with police focused on blocking traffic
for G-20 delegates’ endless limousine motorcades. That remained the case throughout
the day, as world leaders burned oil and produced hot air.

Eight people, including six members of Veterans for Peace, one member of Iraq
Veterans Against the War, and one member of Military Families Speak Out got
around a construction fence, went up the Archives steps, and climbed 90 feet
of scaffolding. From the top of the building they unfurled giant banners, the
first at about 8:15 a.m. and the second around 8:45. The first read: “Defend
Our Constitution, Arrest Bush and Cheney, War Criminals!” The second said:
“We Will Not Be Silent.”

The enormous banners stayed up until about 2:30 when it started to rain, hail,
and blow. Many hundreds of people stopped by. One man, who said he’d seen the
banners from blocks away, said he’d come over imagining the Archives had opened
an exhibit on freedom of speech. The vets took a sound system up with them,
and all day blasted music and speeches by Martin Luther King Jr. Down below,
allies passed out flyers and talked to reporters, including representatives
of NBC News, German television, Argentinean television, and KPFA.

As the banners were being unfurled Saturday morning, a few security guards
came out and said that they might call the police and fire departments to come
and get the activists down, but that they hated to deprive citizens of the city
of needed services. Ferner found this ludicrous, given the thousands of cops
working overtime to wait on G-20 delegates. Later the guards threatened to arrest
everyone on the sidewalk. Nobody took these threats very seriously, and they
turned out to be empty.