The Bush administration said Monday the constitutionality of its warrantless electronic eavesdropping program cannot be challenged.

The government is taking that position in seeking the dismissal of federal court lawsuits against the government and AT&T over its alleged involvement in the once-secret  surveillance program adopted after the Sept. 11 terror attacks. The strategy was first recognized by the U.S. Supreme Court in a McCarthy-era lawsuit. It has been increasingly invoked in a bid to shield the government from legal scrutiny.

Two senior Justice Department officials, speaking on condition of anonymity in a teleconference with reporters, reiterated the administration’s position that it was invoking the so-called “state secrets privilege” in arguing that the 9th U.S. Circuit Court of Appeals must dismiss the cases because they threaten to expose information authorities say is essential to the nation’s security.

“The case cannot be litigated in light of the national security interest involved,” one official said. 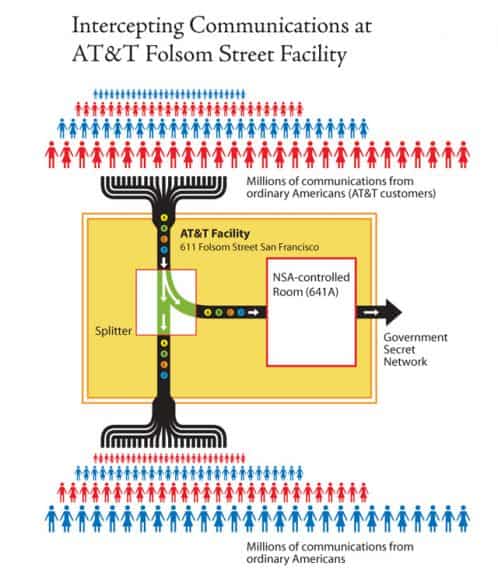 The officials spoke on the condition that their names would not be published because, they said, it was the government’s protocol not to comment on pending litigation.

The Bush administration has invoked the state secrets defense often, from spy cases and patent disputes to employment discrimination litigation.

Still, two judges have ruled recently that the defense does not apply in two lawsuits challenging Bush’s surveillance program. President Bush acknowledged in 2005 that the government was eavesdropping without warrants on communications in the United States as long as one of the parties to the communication was suspected of terrorism and outside the United States.

On Wednesday, the government will urge the San Francisco-based appeals court to dismiss the case on grounds that the case could expose state secrets, the justice department officials said.

“In our view, those claims should always be dismissed,” a senior administration official said. “A year from now, a director of national intelligence, looking at all of the same information, may not make the same determination.”

The official added: “These are legal principals not simply being made up by the executive.”

The officials also said that the lawsuits should also be tossed because the plaintiffs have no direct proof they were spied on.

“We cannot confirm or deny whether or not that’s true,” one of the officials said.

Earlier this month, Congress sanctioned warrantless eavesdropping with new legislation, which is also under attack on allegations such electronic surveillance violates the Fourth Amendment’s warrant requirements. The new law requires that at least one of the parties to the communication be outside of the United States and associated with terrorism.