Many deeply concerned citizens of this Republic and the world have been engaged in tireless, multifaceted research and investigation about the events surrounding the 9/11 tragedy. These patriots have produced articles, essays, books and films that seek answers to the multitude of unanswered questions about this atrocity. Not having researched these questions myself and having no answers, when I have appeared before them I have encouraged the continuation of their valuable work as citizens of the Republic.

In their numbers are distinguished scientists, engineers, architects, professional people from all walks of life and families of victims who seek closure — people for whose courage, determination, intelligence and steadfastness, I have boundless admiration. It was largely as a result of their efforts that a 9/11 Commission was established in the first place over the initial opposition of the Bush administration.

The failure of that Commission to seek, even address the critical questions is now a part of contemporary history. Former Georgia Senator, Max Cleland, resigned early on in disgust citing official obstruction. More recently, Co-Chairmen Kean and Hamilton, have themselves declared their awareness that their work was obstructed and denied valuable information, materials and evidence. Consequently, there is overwhelming agreement that the initial government sponsored investigation was a failure in respect of bringing truth about 9/11 to the light of day.

That is why a group of citizens in the City of New York, aided, supported and encouraged by citizens throughout the United States and the world (remember, 80 nations lost citizens in that attack) came together to mount an effort to put a Referendum question on the general election ballot for the consideration of the voters of New York City, seeking their approval for the establishment of a new, independent Commission to investigate all aspects of 9/11. The Commission will convene with a commitment to go where the facts lead, and they will have subpoena power to compel testimony under oath and full investigative and legal support staff.

I encourage all citizens, everywhere, to support the establishment of this Commission and its work.

The torch of leadership in this effort has recently been passed to the New York City Coalition for Accountability Now (NYC CAN). Ted Walter, a key leader of last year’s petitioning effort, has taken on the task of directing NYC CAN through this initiative’s final phases. Reverend Frank Morales, himself a 9/11 First Responder, has assumed the position of Treasurer. I have met with Ted and Frank on several occasions and have the utmost confidence not only in their abilities, but also the direction in which NYC CAN and its stellar, still growing Executive Council are taking this fight.

That being said, it has come to my attention that many are concerned about how events that have already transpired might impact this effort as it moves ahead. Main points of emphasis are the validity of the more than 30,000 signatures already gathered and the composition of the Commission itself.

Regarding the signatures, I have to date heard only legal opinion confirming their continuing validity. Additionally, the 45,000 new signatures NYC CAN plans to collect in the coming weeks will, by themselves, be enough to clear any potential legislative hurdle to placing the referendum on the November ballot, and at the same time render as moot any possible scenario by which opponents of this initiative might seek to use the courts as a means of delaying the inevitable by challenging the existing signatures — thus, the importance of supporting NYC CAN in this final push.

As far as the named Commissioners are concerned, we all understand that nobody will ever enjoy universal public support. I think I can speak for all of us when I say that any commitment, particularly one made so early-on in the process, to a cause of this magnitude is made with not only with the understanding of, but with respect for, the importance of this undertaking and the resolve to ensure its successful completion. I cannot imagine any among us who if, for any reason, were to become an impediment to the successful completion of our mission, would not recuse themselves. Were that ever to happen, I also see none among us who would not seek to relieve such an individual of their responsibilities.

I call on all those within sight and sound of this message to rally behind this effort and, in your thousands, to support it with massive numbers of volunteer workers and monetary contributions. I encourage you to visit www.NYCCAN.org and contribute now. History waits for no man.

Let us join our brothers and sisters in New York City and from the very belly of the beast, seek truth and justice. 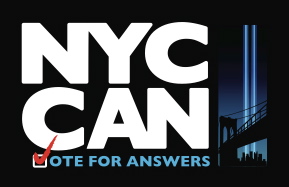