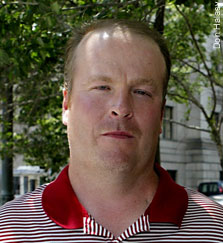 Ex-cop John Walcott, who worked at Ground Zero and now has leukemia, has joined
a suit against a WTC insurance fund. 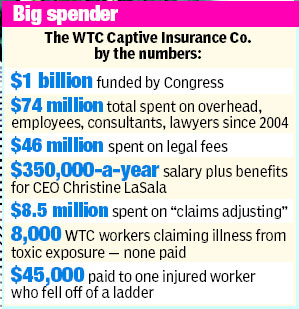 July
17, 2007 — The $1 billion insurance fund set up for the World Trade Center
cleanup has violated its congressional mandate to pay legitimate worker-injury
claims and “squandered” millions on expenses, an explosive lawsuit
is charging.

Controlled by Mayor Bloomberg, the WTC Captive Insurance Co. and its agents
have “unethically profited” from the federal fund, draining money
available for ill workers, alleges the suit, to be filed today in Manhattan
Supreme Court.

The WTC insurance fund has spent close to $74 million on overhead and legal
bills so far – but paid just $45,000 to one worker who fell off a ladder.

While letting the fund pay fat salaries and fees to its employees, consultants
and lawyers, the mayor has wrongly exploited the unit to fight claims by thousands
of workers with illnesses blamed on toxic exposure, the suit says.

“Congress gave Bloomberg a billion dollars to cover for the mistakes he
and his predecessor, Mayor Giuliani, made in failing to protect tens of thousands
of workers,” lawyer David Worby said. “Now, adding insult to injury,
he refuses to use the funds intended for that exact purpose – to help the sick
and dying 9/11 heroes.”

The suit will be filed by Worby Groner & Napoli Bern, a law firm already
battling the city in a class-action negligence suit on behalf of nearly 10,000
ill WTC responders.

The plaintiffs in the new suit are former NYPD Detective John Walcott, who
has leukemia, NYPD Detective Frank Maisano, who has severe lung disease, and
Mary Bishop, a St. Vincent’s Hospital worker with cancer, lung and digestive
diseases.

“If it wasn’t for the rescue workers and volunteers, our city would be
in chaos,” said Walcott, 42, whose daughter was an infant when he was diagnosed
in 2003. “How can Mayor Bloomberg justify not releasing the funds Congress
gave us when he could save lives and homes and families?”

Besides the fund and Bloomberg, the suit names the outfit’s five-member board
of directors – all appointed by Bloomberg – and Christine LaSala, the company’s
president and CEO.

Citing city records, the suit traces the firm back to its origin to prove its
claim that Bloomberg has twisted its mission.

In May 2002, the city made a request to feds, saying “toxic chemicals
emanating from the WTC debris site” made insurance “absolutely vital
to protect the city and its contractors.”

Then-Gov. George Pataki pushed a bill to create the nonprofit firm to manage
the fund. “This legislation is necessary for the city to expedite the payment
of claims,” Pataki and Giuliani said in a 2003 press release.

At a meeting in December 2004, minutes show, LaSala declared the firm’s main
purpose was to disburse the fund “in an equitable manner that maximizes
compensation to those parties who suffered damages as a result of the WTC debris
removal program.”

Much of the money has been poured into an ongoing court battle in which the
city contends it has immunity from all WTC suits because it was responding to
a terror attack.

Other expenses include $8.5 million paid to GAB Robbins, a risk-management
firm, for “claims adjusting.” But the firm has done little adjusting,
the suit says – WTC Captive Insurance has refused to review the medical records
of sick workers.

LaSala has said the firm has a “duty to defend” the city and its
WTC contractors, and has “faithfully followed its mandate.”

The proposed bill will also allow for the formation of a pure captive insurance
company by New York City to provide coverages for liability relating to or arising
out of activities in or near the World Trade Center site in response to the
attacks of September 11, 2001.

“The new legislation will mean New York City will now have important
insurance coverages it greatly needs relating to the tragedies of September
11th,”Governor Pataki said. “The Federal Emergency Management Agency
specifically authorized the creation of a New York City captive and the City
explored various options and decided that the formation of a captive insurance
company was in its best interest for claims arising out of the clean-up effort
at and near the World Trade Center.

“Our policies of cutting taxes, controlling spending, and eliminating
red tape have strengthened the State’s business climate. This bill reaffirms
my commitment to pursuing policies that result in creating business opportunities
and jobs in the State of New York,” Governor Pataki said.

New York City Mayor Michael Bloomberg said, “The City of New York, together
with State officials and the New York Congressional delegation, has fought long
and hard for federally-paid insurance to protect the City and its contractors
for claims arising from the massive debris removal work done in the World Trade
Center. This legislation is necessary for the City to expedite the payment of
claims relating to this effort.”

The new State captive legislation contains several provisions to help the
State’s business community. The bill provides a new risk transfer vehicle, known
as a sponsored captive insurance company, which permits various participants
to use the same vehicle to self-fund their risks. The bill in addition, creates
additional flexibility by lowering the threshold for businesses to form single
parent captives and to participate in a group captive. As well, public entities
that meet appropriate standards will also be permitted to form captives.

The U.S. Congress recently passed legislation directing the Federal Emergency
Management Agency (FEMA) to provide the City of New York with up to $1 billion
in coverage for the City and its contractors for claims arising from debris
removal performed after the collapse of the World Trade Center buildings. The
federal legislation also directs the City of New York to use such funds to establish
a captive insurance company or other such appropriate insurance mechanism.

Superintendent of Insurance Gregory V. Serio said, “The new State captive
legislation also creates greater flexibility and allows businesses and public
entities new opportunities to avail themselves of greater choices for more efficiency
in managing and financing risk. Given the contraction of the commercial insurance
market around the country, the new legislation affords even more of New York’s
businesses a valuable option by offering the use of captives as an alternative
form of insurance. The New York State Insurance Department is proud of its status
as both a facilitator of insurance coverage for New York’s businesses and industry
regulator of safety and soundness in the best traditions of financial regulation.
The Department stands ready to help New York’s businesses manage their risk,
save money and gain greater control of their corporate futures.”

Empire State Development Corporation Chairman Charles A. Gargano said, Companies
from across the State, across the Nation, and around the world are expanding
their operations and investing their futures in New York. This important legislation
is yet another example of Governor Pataki working to improve the business climate
of New York and his commitment to pursuing pro-business, pro-growth policies.”

Governor Pataki signed New York’s first captive legislation in August 1997,
authorizing the formation of captive insurance companies in the State. Captives
are created when a business or groups of businesses join to insure or reinsure
their own risk. And allowing these insurers and their managers to operate free
of most regulatory constraints, serving exclusively the companies or industries
that form them.

Superintendent Serio added, “The Department’s streamlined licensing process
will allow New York’s business community to benefit from captive formation.
Once formed, a captive can reduce a business’ insurance costs by reducing premiums,
accessing the reinsurance market, and centralizing the enterprise’s risk management
operation. I encourage the State’s business community to explore the possibilities
and the advantages associated with the creation of captives.”

The Insurance Department recently announced a newly dedicated “captive
group” and the launch of a new Web site designed to fast-track applications
for captive formation. In order to be even more responsive to the needs of a
rapidly changing insurance marketplace, New York’s businesses now have dedicated
contacts in the Department of Insurance to answer all captive insurance questions
and process captive applications within 30 days of the receipt of a fully completed
application. The web address is www.NYCaptives.com.