The studies scientifically refute the U.S. National Institute of Standards and Technology (NIST) claim that, for the first time in history, fire caused the sudden and complete collapse of a large, fire-protected, steel-framed building on 9/11.

(Note that whereas the Consensus Panel uses a scientific methodology to peer-review its work, the NIST report was not peer-reviewed.)

The first Panel study deals with the NIST computer simulations, which purported to show that fire-induced thermal expansion caused a girder to be pushed off its seat at Column 79, thereby initiating a global collapse of the entire 47-storey building at 5:21 in the afternoon. 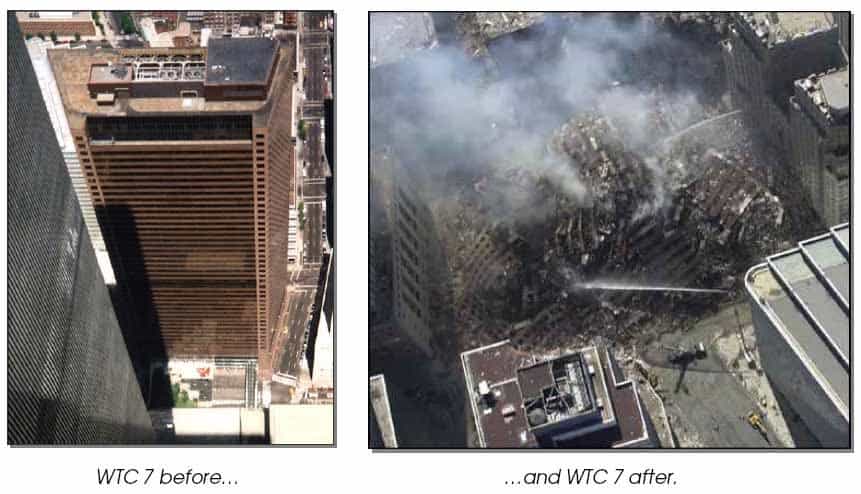 However, a recent FOIA request has produced WTC 7 architectural drawings showing that the NIST simulations omitted basic structural supports that would have made this girder failure impossible.

The second Consensus Panel study deals with NIST’s claim that it did not recover any steel from this massive steel-frame skyscraper.

This is extraordinary, given the need to understand why a steel-frame building would have completely collapsed for the first time in history from fire alone, and to thereby prevent a recurrence.
We know now that some of the steel was recovered.  Photographs recently obtained by researchers show the strange curled-up paper-thin WTC 7 steel, with a NIST investigator pointing it out.

The third Panel study shows that on September 11, 2001, many people were told hours in advance that WTC 7 was going to collapse.

MSNBC reporter Ashleigh Banfield said early in the afternoon: “I’ve heard several reports from several different officers now that that is the building that is going to go down next.”

Many members of the New York Fire Department were confidently waiting for the building to come down:

In addition, CNN and the BBC made premature announcements.

This foreknowledge corroborates the evidence presented in previous Consensus Points (WTC7-1 to WTC7-5) that WTC 7 was brought down by controlled demolition.