The U.S. government has turned to 9/11 again in order to justify its program of spying on all Americans and to support a new, expanded war in Syria. Yet as Americans are distracted by these ongoing crimes, the deception behind the origin of the War on Terror is being more fully revealed. 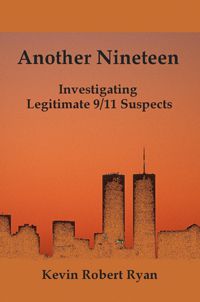 Were the crimes of September 11, 2001 solely the work of Osama bin Laden and nineteen troubled young Arabs, or were more powerful people involved? After a decade of investigation Kevin Ryan, the co-editor of the Journal of 9/11 Studies, offers an evidence-based analysis of nineteen other suspects.

With the support of victims’ families and leading 9/11 researchers, Another Nineteen looks at who was in position to accomplish major elements of the crimes that have yet be explained. Detailed evidence is presented that reveals how each of the alternative suspects had the means, motive and opportunity to accomplish one or more aspects of the 9/11 attacks.

“Finally a comprehensive and meticulously researched book that thoroughly details what occurred before and on 9/11. Without a doubt, Another Nineteen should be required reading for those who want the real story.” – Robert McIlvaine, father of Bobby McIlvaine, who was killed at the World Trade Center on 9/11

“Kevin Ryan has written a book that reminds us that the attacks of September 11, 2001 and their details have never really been investigated. Kevin has laid out the historical framework in a way that has never been done before. The importance of this cannot be overstated.” – Lorie Van Auken, member of the Family Steering Committee for the 9/11 Commission and widow of Kenneth Van Auken, who was killed at the World Trade Center