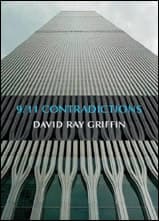 This essay is the second in a series of articles written by Dr. David Ray Griffin for The Canadian. This particular one is an abbreviated version of Chapters 2 and 3 of Dr. Griffin’s 9/11 Contradictions: An Open Letter to Congress and the Press (Northampton: Olive Branch, March, 2008).

With regard to the morning of 9/11, everyone agrees that at some time after 9:03 (when the South Tower of the World Trade Center was struck) and before 10:00, Vice President Dick Cheney went down to the Presidential Emergency Operations Center (PEOC), sometimes simply called the “bunker,” under the east wing of the White House. Everyone also agrees that, once there, Cheney was in charge—that he was either making decisions or relaying decisions from President Bush. But there is enormous disagreement as to exactly when Cheney entered the PEOC.

According to The 9/11 Commission Report, Cheney arrived “shortly before 10:00, perhaps at 9:58” (The 9/11 Commission Report [henceforth 9/11CR], 40). This official time, however, contradicts almost all previous reports, some of which had him there before 9:20. This difference is important because, if the 9/11 Commission’s time is correct, Cheney was not in charge in the PEOC when the Pentagon was struck, or for most of the period during which United Flight 93 was approaching Washington. But if the reports that have him there by 9:20 are correct, he was in charge in the PEOC all that time.

The most well-known statement contradicting the 9/11 Commission was made by Secretary of Transportation Norman Mineta during his public testimony to the 9/11 Commission on May 23, 2003. Saying that he “arrived at the PEOC at about 9:20 AM,” Mineta reported that he then overheard part of an ongoing conversation, which had obviously begun before he arrived, between a young man and Vice President Cheney. This conversation was about a plane coming toward Washington and ended with Cheney confirming that “the orders still stand.” When Commissioner Timothy Roemer later asked Mineta how long after his arrival he overheard this conversation about whether the orders still stood, Mineta replied: “Probably about five or six minutes.” This would mean, Roemer pointed out, “about 9:25 or 9:26.”

This is a remarkable contradiction. Given the fact that Cheney, according to Mineta, had been engaged in an ongoing exchange, he must have been in the PEOC for several minutes before Mineta’s 9:20 arrival. If Cheney had been there since 9:15, there would be a 43-minute contradiction between Mineta’s testimony and The 9/11 Commission Report. Why would such an enormous contradiction exist?

One possible explanation would be that Mineta was wrong. His story, however, is in line with that of many other witnesses.

Richard Clarke reported that he, Cheney, and Condoleezza Rice had a brief meeting shortly after 9:03, following which the Secret Service wanted Cheney and Rice to go down to the PEOC. Rice, however, first went with Clarke to the White House’s Video Teleconferencing Center, where Clarke was to set up a video conference, which began at about 9:10. After spending a few minutes there, Rice said, according to Clarke: “You’re going to need some decisions quickly. I’m going to the PEOC to be with the Vice President. Tell us what you need.” At about 9:15, Norman Mineta arrived and Clarke “suggested he join the Vice President” (Against All Enemies, 2-5). Clarke thereby implied that Cheney was in the PEOC several minutes prior to 9:15.

In an ABC News program on the first anniversary of 9/11, Cheney’s White House photographer David Bohrer reported that, shortly after 9:00, some Secret Service agents came into Cheney’s office and said, “Sir, you have to come with us.” During this same program, Rice said: “As I was trying to find all of the principals, the Secret Service came in and said, ‘You have to leave now for the bunker. The Vice President’s already there. There may be a plane headed for the White House.’” ABC’s Charles Gibson then said: “In the bunker, the Vice President is joined by Rice and Transportation Secretary Norman Mineta” (“9/11: Interviews by Peter Jennings,” ABC News, September 11, 2002).

The 9/11 Commission agreed that the Vice President was hustled down to the PEOC after word was received that a plane was headed towards the White House. It claimed, however, that this word was not received until 9:33. But even then, according to the Commission, the Secret Service agents immediately received another message, telling them that the aircraft had turned away, so “[n]o move was made to evacuate the Vice President at this time.” It was not until “just before 9:36” that the Secret Service ordered Cheney to go below (9/11CR 39). But even after he entered the underground corridor at 9:37, Cheney did not immediately go to the PEOC. Rather:

Once inside, Vice President Cheney and the agents paused in an area of the tunnel that had a secure phone, a bench, and television. The Vice President asked to speak to the President, but it took time for the call to be connected. He learned in the tunnel that the Pentagon had been hit, and he saw television coverage of the smoke coming from the building. (9/11CR 40)

The contradiction could not be clearer. According to the Commission, Cheney, far from entering the PEOC before 9:20, as Mineta and others said, did not arrive there until about 9:58, 20 minutes after the 9:38 strike on the Pentagon, about which he had learned in the corridor.

The 9/11 Commission’s account even contradicted that given by Cheney himself in a well-known interview. Speaking to Tim Russert on NBC’s Meet the Press only five days after 9/11, Cheney said: “[A]fter I talked to the president… I went down into… the Presidential Emergency Operations Center… [W]hen I arrived there within a short order, we had word the Pentagon’s been hit.” Cheney himself, therefore, indicated that he had entered the PEOC prior to the (9:38) strike on the Pentagon, not 20 minutes after it, as the Commission would later claim.

Dealing with the Contradictions

How did the 9/11 Commission deal with the fact that its claim about the time of Cheney’s arrival in the PEOC had been contradicted by Bohrer, Clarke, Mineta, Rice, several news reports, and even Cheney himself? It simply omitted any mention of these contradictory reports.

During an interview for the Canadian Broadcasting Corporation in 2006, Hamilton was asked what “Mineta told the Commission about where Dick Cheney was prior to 10 AM.” Hamilton replied: “I do not recall” (“9/11: Truth, Lies and Conspiracy: Interview: Lee Hamilton,” CBC News, 21 August 2006). It was surprising that Hamilton could not recall, because he had been the one doing the questioning when Mineta told the story of the young man’s conversation with Cheney. Hamilton, moreover, had begun his questioning by saying to Mineta: “You were there [in the PEOC] for a good part of the day. I think you were there with the Vice President.” And Mineta’s exchange with Timothy Roemer, during which it was established that Mineta had arrived at about 9:20, came immediately after Hamilton’s interrogation. And yet Hamilton, not being able to recall any of this, simply said, “we think that Vice President Cheney entered the bunker shortly before 10 o’clock.”

To see possible motives for the 9/11 Commission’s efforts to obliterate Mineta’s story from the public record, we need to look at the conversation he reported to the Commission. He said:

Mineta’s story had dangerous implications with regard to the strike on the Pentagon, which occurred at 9:38. According to the 9/11 Commission, the military did not know that an aircraft was approaching the Pentagon until 9:36, so that it “had at most one or two minutes to react to the unidentified plane approaching Washington” (9/11CR 34). That claim was essential for explaining, among other things, why the Pentagon had not been evacuated before it was struck — a fact that resulted in 125 deaths. A spokesperson for Secretary of Defense Rumsfeld, when asked why this evacuation had not occurred, said: “The Pentagon was simply not aware that this aircraft was coming our way” (Newsday, Sept. 23, 2001). Mineta’s testimony implied, by contrast, that Cheney and others knew that an aircraft was approaching Washington about 12 minutes before that strike.

Even more problematic was the question of the nature of “the orders.” Mineta assumed, he said, that they were orders to have the plane shot down. But the aircraft was not shot down. Also, the expected orders, especially on a day when two hijacked airliners had already crashed into buildings in New York, would have been to shoot down any nonmilitary aircraft entering the “prohibited” airspace over Washington, in which “civilian flying is prohibited at all times” (“Pilots Notified of Restricted Airspace; Violators Face Military Action,” FAA Press Release, September 28, 2001). If those orders had been given, there would have been no reason to ask if they still stood. The question made sense only if the orders were to do something unusual — not to shoot the aircraft down. It appeared, accordingly, that Mineta had inadvertently reported Cheney’s confirmation of stand-down orders.

That Mineta’s report was regarded as dangerous is suggested by the fact that the 9/11 Commission, besides deleting Mineta’s testimony and delaying Cheney’s entrance to the bunker by approximately 45 minutes, also replaced Mineta’s story with a new story about an incoming aircraft. According to The 9/11 Commission Report, here is what really happened:

The 9/11 Commission thereby presented the incoming aircraft story as one that ended with an order for a shoot down, not a stand down. And by having it occur after 10:10, the Commission not only disassociated it from the Pentagon strike but also ruled out the possibility that Cheney’s shootdown authorization might have led to the downing of United Flight 93 (which crashed, according to the Commission, at 10:03).

Given the fact that the 9/11 Commission’s account of Cheney’s descent to the bunker contradicted the testimony of not only Norman Mineta but also many other witnesses, including Cheney himself, Congress and the press need to launch investigations to determine what really happened.

About the writer:
David Ray Griffin

This essay is the second in a series of articles written by Dr. David Ray Griffin for The Canadian. This particular one is an abbreviated version of Chapters 2 and 3 of Dr. Griffin’s 9/11 Contradictions: An Open Letter to Congress and the Press (Northampton: Olive Branch, March, 2008).

Make comments about this article in The Canadian Blog.