A U.S. Customs Agent on duty when controversial drug pilot and “soldier of fortune” Michael Brassington attempted to re-enter the US through Fort Lauderdale International Airport in April of 2004 was instructed by a Supervisor at Immigrations & Customs Enforcement (ICE) to treat Brassington — a long-time employee and business associate of Wallace J. Hilliard, owner of the flight school that taught Mohamed Atta to fly – as a “grave threat to national security.”

The news comes as the former Guyanese military pilot prepares to go on trial in a Federal Courthouse in Newark next month for recklessly endangering the lives of passengers, whose number includes ex-Presidents George Herbert Walker Bush and Bill Clinton as well as numerous celebrities.

The disclosure, from a soon-to-be-released documentary, “The New American Drug Lords,” is a reminder, more than eight years later, of the unfinished nature of the investigation into the 9/11 attack.

Narcotics record was first revealed in “Welcome to TerrorLand”

James Sanders was a Customs Agent on late night duty on April 6th 2004 at Fort Lauderdale International Airport, when he had a memorable encounter with Michael Brassington, who was attempting to re-enter the U.S. from the Bahamas.

“Brassington went through Immigration first,” explained Sanders. “The Immigration Inspector had ‘top-stamped’ his Customs declaration, which means he needed to be ‘secondary-ed,’ which means given a closer inspection… search his luggage, at the very least, and ask him more questions,”

“The INS Agent whispered to me that Brassington had a narcotics record.”

Brassington has previously been identified, in news articles in this space and in the book “Welcome to TerrorLand,” as the co-pilot aboard a Lear Jet belonging to Wally Hilliard on thirty-nine weekly drug flights from Venezuela to Fort Lauderdale and Teterboro Airport outside New York City on

After being surrounded on the tarmac at Orlando Executive Airport by DEA agents with submachine guns, the plane was busted on July 25, 2000.

Agents found 43 lbs. of heroin onboard.

The Orlando Sentinel called it “the biggest bust of its kind in Central Florida history.”

The revelation, which is clearly significant to the story of the 9/11 attack, has been treated to years of official silence, and ignored in the mainstream media.

A notation had been placed after Brassington’s name on his computer screen, Sanders said.

“Brassington had an “active lookout” for narcotics,” sander explained. “And there was the date, July 25, 2000, that he’d got caught.”

“Come to find out later, he’d been working for a 9/11 flight school owner named Wally Hilliard. But I only found that out after I discovered your website,www.madcowprod.com. Its kind of strange that the whole subject never came up while I was working down there. And I just couldn’t have imagine that this was all connected to 9/11.”

While Customs Agent Sanders was examining his narcotics record in the computer Brassington began brandishing a letter from a top official in the U.S. Dept of Homeland Security.

“I was looking at Brassington’s narcotics record on the computer,” says Sanders, still incredulous at the memory, “when he handed me a letter from Washington!” 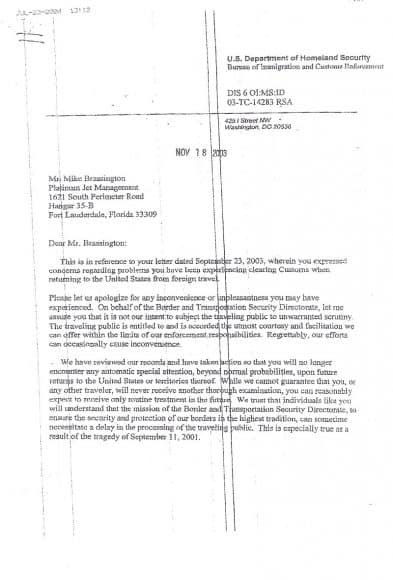 Despite Brassington’s ongoing participation in a criminal enterprise, the letter seemed clearly designed to smooth his re-entry into the U.S.

“A ”get out of jail-free-pass” sometimes isn’t enough”

Sanders’ voice rose in indignation as he read it out loud.

“This is what the Dept of Homeland Security has to say to somebody that got caught smuggling drugs for a 9/11 flight school owner:

“This is in reference to your letter of Sept 23 2003 when you expressed concerns you were having clearing customs when returning to the United States from foreign travel.

”Please let us apologize for any inconvenience or unpleasantness you may have experienced. On behalf of the border and Transportation security directorate, let me assure you it is not our intent to subject the traveling public to unwarranted scrutiny.

“The traveling public is entitled to and is accorded the utmost courtesy and facilitation we can offer within the limits of our enforcement responsibilities. Regrettably our efforts can occasionally cause inconvenience.”

“We have reviewed our records and taken action so you will no longer encounter any automatic special attention beyond normal probabilities upon future return to the United States or territories thereof.”

The letter is signed by Gloria Marshall, head of the “Information Disclosure Unit” of the“Mission Support Division” of the Dept. of Homeland Security.

DEA be damned! De-activate his lookout! 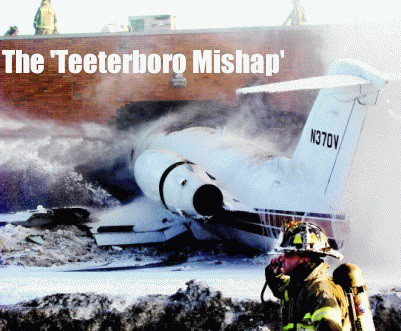 “What that”s saying, is that–at the very least–they were going to de-activate his lookout,” Sanders explained.

“But the lookout was placed by the DEA. It was a DEA record. So Customs is countermanding a record placed by another Federal Agency, which is illegal.”

“This was a strange occurrence. So I hesitated. I said, okay wait a second. He has this official-looking letter that says they”re going to take care of his record…

“But he still has an active record. I felt like a deer in the headlights. I didn’t know what to do. But I had just enough ‘presence of mind’ to pick up the phone and call Special Agent Norm Bright, who the record said was Brassington’s ”point of contact.’”

“Point of contact” is a Customs term, Sanders told us, for an Agent assigned particular responsibility for a “person of interest” whose movements are being tracked.

“Bright was a local ICE Agent and I guess he was tracking Brassington,” said Sanders. “So I called him up, and I told him about the letter.

What every successful drug trafficker needs to know

“He said you can just disregard the letter, and told me to ignore it. And he described Mike Brassington to me as a ‘grave threat to national security.’ He told me that I needed to check him, search him, and search all his passengers.”

“And that”s what I did,” Sanders explains. “I didn”t think of him as a terrorist suspect. I just thought he was really into drugs, and I needed to check him really close. I had no idea of the shit-storm I was about to ignite.”

“I searched the luggage of all his passengers, and then I searched his plane.

“Norm Bright also told me to try to get a drug dog there. But the problem with that is that on Tuesday nights, there aren’t any drug dogs available,” explained Sanders.

“Tuesday night is the drug dogs night off.”

While far from the first hint we’d received that things might not be as ship-shape in the Dept of Homeland Security as American citizens who have been footing the enormous bill have been led to believe, the news came as something of a shock.

Apparently it doesn’t take elaborate radar detection and counter-surveillance electronic gear to become a successful drug trafficker, as we’d been led to believe…

Anyone with an “in” at U.S. Customs, like Michael Brassington, is clued-in to the facts about the best time of the week to enter the U.S. through Fort Lauderdale.

On Tuesday night. While the drug dogs are out bowling.