At least two 9/11 hijackers were aided by men with “extensive ties” to the Saudi Arabian government, according to newly-declassified documents.

The possible links between the Saudi government and the perpetrators of America’s worst-ever terrorist attack were catalogued in a 2002 Congressional report, but were deemed by then-president George W Bush to be too damaging to be made public.

Since then families of 9/11 victims and members of Congress have lobbied for the portion of the report- known as the “28 Pages” – to be declassified.

The report was released on Friday, and names five Saudi individuals with links to the government that allegedly helped the hijackers – of which 15 of 19 were Saudi nationals – get apartments, open bank accounts, attend local mosques and get flight lessons.

Chief among those individuals was Omar al-Bayoumi, who was long suspected of being a Saudi intelligence officer.

Al-Bayoumi received a monthly salary from a company in the US associated with the Saudi Ministry of Defence even though he visited it only once.

When hijackers Khalid al-Mihdhar and Nawaf al-Hazmi arrived in San Diego in April 2000 he met with them shortly after a separate meeting at the Saudi consulate, and threw a party to welcome them.

The hijackers stayed at his apartment for several days before he found them another one and co-signed the lease, according to the report. 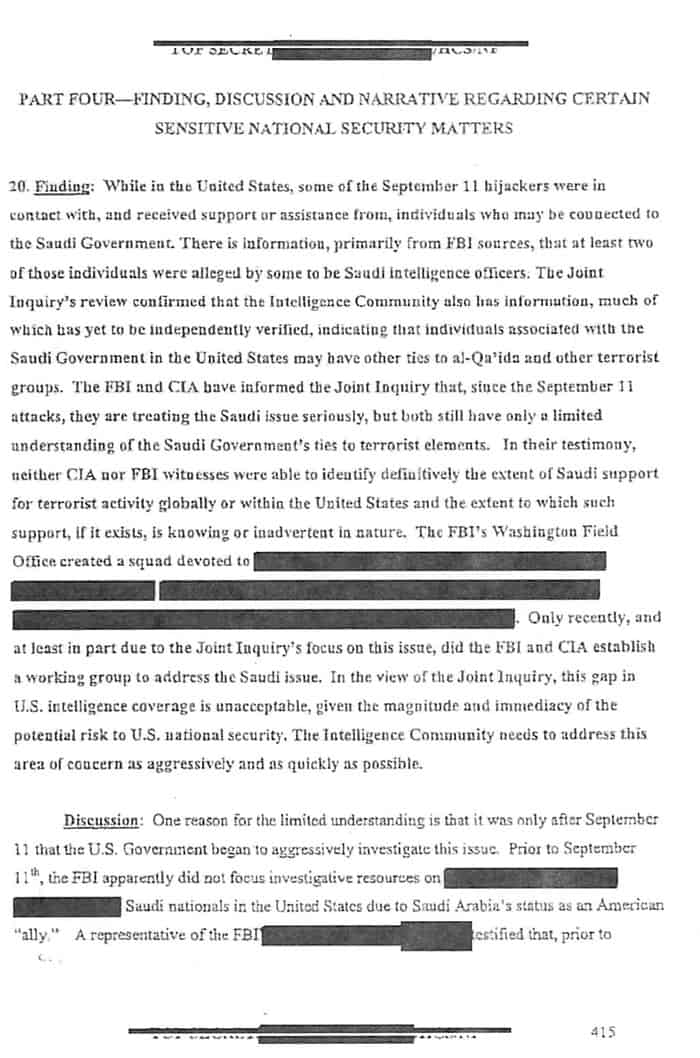 In the first five months of 2000 Al-Bayoumi telephoned Saudi government institutions in the US 100 times, including three people at the Saudi Embassy in Washington.

He had been the subject of a US counter-terrorism investigation in 1998 and 1999 but the inquiry was dropped. He left the US a month before the September 11 attacks.

The report also included details of Al-Bayoumi’s associate Osama Bassnan, who the FBI described as “an extremist and supporter of Osama bin Laden”.

Bassnan lived across the street from two of the hijackers, and told an FBI informant he had helped them.

Bassnan’s wife received a monthly salary from Princess Haifa, wife of Prince Bandar, the Saudi Ambassador to the US, for “nursing services”.

During two Bush presidencies Prince Bandar was such a close family friend that he was referred to as “Bandar Bush”.

The documents also said: “On at least one occasion Bassnan received a cheque directly from Prince Bandar’s account.”

The report also suggests that the CIA and FBI had been reticent to examine Saudi government support for terrorism in the months after the attacks. It says the lack of investigation into the “Saudi issue” is “unacceptable, given the magnitude and immediacy of the potential risk to US national security”.

Opinions were mixed as to how significant the revelations from the long-hidden pages are.

Abdullah al-Saud, Saudi Arabia’s ambassador to the United States, released a statement on Friday saying the documents proved that no one acting in an official government capacity had played a role in the attacks. 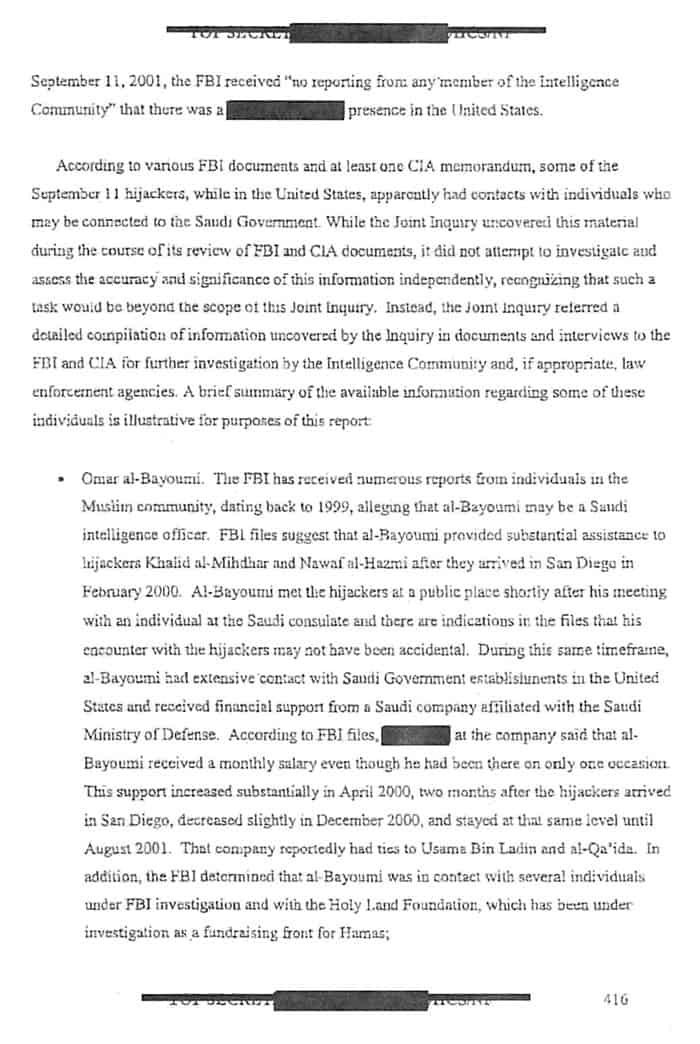 Bob Graham, a former senator who co-chaired another investigation into the attacks, said the pages “point a very strong finger at Saudi Arabia as being the principle financier.”

But Congressman Adam Schiff, the top Democrat on the House Intelligence Committee, said: “Certainly a lot of smoke, certainly a lot of financing from Saudi individuals, but those who are hopeful that those pages contain a smoking gun will be disappointed.”

Why Saudi Ties Mean US Ties

The Saudis, Sarasota and the FBI

The FBI Took a Powder