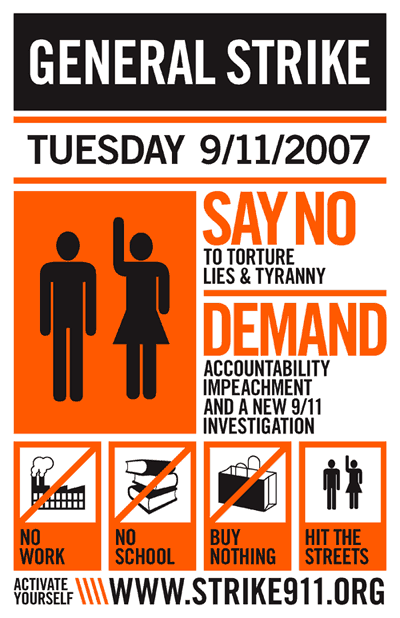 Today. Six years later. SIX YEARS! Are you safer? Is your life better? Your neighbor’s? Your kids? Have you acclimated to permanent Code Orange and willingly handed over your civil liberties, accepted endless war in your name and 400,000 homeless veterans on the streets of America, agreed with your representatives’ capitulation to corporate control of your life, gotten past that nagging voice that repeats ” all the victims deserve justice”, forgotten those pictures of Abu Ghraib and Guantánamo, normalized the outright lies and utter lack of accountability for anyone in government office … ?

General Strike! No school, no work, no shopping, no life as usual… Not for today. Not for this week. Not until we’ve won! Of course not everyone can participate in every aspect. But you can do something . You can take action in every way that you are able to take action. Think about it. Do what you can, right now.

We encourage you to participate today in the general strike, originally called by strike911.org . In fact, 911Truth.org issued a press release in support. While you’re striking from everything, we encourage you to read about the ‘hidden’ history of People’s movements, a powerful bit of history not taught in our schools, not covered in the media, not discussed on the street corners. Not sure where to start? Couragetoresist.org has a great section on People Power . Check out Globalize Liberation from your library. Rent The Fourth World War from the video store. Listen again to Martin Luther King’s “Beyond Vietnam” Speech and remember why resistance is imperative, our moral imperative. Call your Representative and Senators right now. Twice, if you feel like it! Demand representation from your Representatives. Write a letter to the editor, call into radio shows, go talk to your neighbor. Call your local clergy and ask them to take a stand for righteousness. A loud, clear, public stand. Read the Declaration of Independence again, with fresh eyes and open heart, adapting it to this present moment, and listen to what you are compelled to do.

When, in the course of human events, it becomes necessary for one people to dissolve the political bonds which have connected them with another, and to assume among the powers of the earth, the separate and equal station to which the laws of nature and of nature’s God entitle them, a decent respect to the opinions of mankind requires that they should declare the causes which impel them to the separation.

We hold these truths to be self-evident, that all men are created equal, that they are endowed by their Creator with certain unalienable rights, that among these are life, liberty and the pursuit of happiness. That to secure these rights, governments are instituted among men, deriving their just powers from the consent of the governed. That whenever any form of government becomes destructive to these ends, it is the right of the people to alter or to abolish it, and to institute new government, laying its foundation on such principles and organizing its powers in such form, as to them shall seem most likely to effect their safety and happiness. Prudence, indeed, will dictate that governments long established should not be changed for light and transient causes; and accordingly all experience hath shown that mankind are more disposed to suffer, while evils are sufferable, than to right themselves by abolishing the forms to which they are accustomed. But when a long train of abuses and usurpations, pursuing invariably the same object evinces a design to reduce them under absolute despotism, it is their right, it is their duty, to throw off such government, and to provide new guards for their future security. 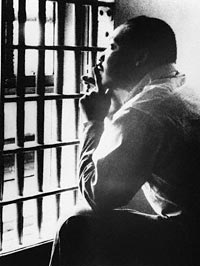 Imagine if Americans could mobilize like Spaniards did after the Madrid train bombings. 11 million people (28% of the population) took to the streets.

If not now, when? A plain and simple question to every American who sees and senses the grave and urgent threat as fascism tightens its grip on our country.

This Tuesday, 9/11/07 and continuing until we get truth and justice, shall we all become, as Martin Luther King puts it, “Drum Majors for Justice.”

The General Strike is not just about one day of dissent; it’s about a mass mobilization that will mark a turning point. If you can, keep on striking indefinitely. But more realistically, take this action as an inspiration to work activism into your everyday life, let go of fear and pessimism and fight for justice with a sense of power and purpose.

Other strikes in the news: taxi strike in NYC . On Tuesday 9/11/07 people will be striking all over the world in solidarity, including New Zealand ! The Freedom From Fear campaign has announced plans in Seattle:

On Tuesday, September 11, the Freedom From Fear Campaign will sponsor a funeral march for all that has been lost since the tragic events of September 11, 2001. The silent march will begin at the Space Needle at 11:00 a.m. and proceed to Seattle’s major media centers, ending in Westlake Center. Several actions will occur from 4:30-6pm. Come join us and reclaim your freedom from fear.