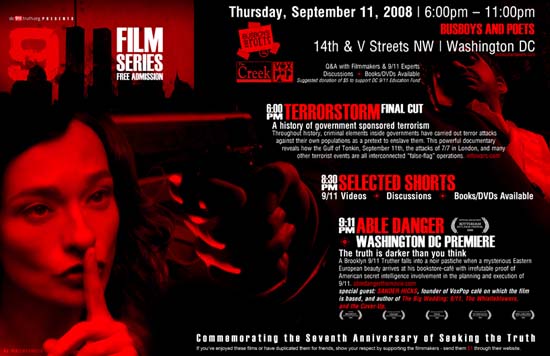 If you’re in the DC area, feel free to join us for a very informed evening of discussion, Q&A with 9/11 filmmakers and research experts, as well as the DC Premiere of the dark levity and film noir 40s detective style of the 9/11 film, ABLE DANGER. abledangerthemovie.com.

Opening the evening’s film series will be the film TERRORSTORM at 6pm followed by a question and answer session wth a series of short videos. At 9:11pm, we will then present the screening of the DC premiere ABLE DANGER.

Special guest Sander Hicks will be the featured speaker, in a discussion of the crimes of 9/11, within the heart of the District of Criminals. Sander is the founder of VoxPop café on which the film is based, and author of The Big Wedding: 9/11, The Whistleblowers, and the Cover-Up. The film, Able Danger, is the story of A Brooklyn 9/11 Truther who falls into a noir pastiche when a mysterious Eastern European beauty arrives at his bookstore-café with irrefutable proof of American secret intelligence involvement in the planning and execution of 9/11.

Bring your friends, especially the ones that tend to role their eyes at you when the subject of 9/11 and the government”s obvious inconsistencies with their account of their official conspiracy theory are brought to their attention. As always, the metro area”s Fed paychecks spooks of COINTELPRO operatives/spooks, who employ fearmongering as a form of warfare are welcome, as well as their corporate cubicle-dwelling counterparts of blog infiltrators, the internet trolls that are paid with your tax dollars to attack you ad nauseam throughout the web 24/7. You spooks will be fine. We don”t know your faces, only your team screennames. Maybe, you”ll learn something about Treason! 😉

Commemorating the Seventh Anniversary of Seeking the Truth