Update at bottom: White House not concerned by judge’s actions 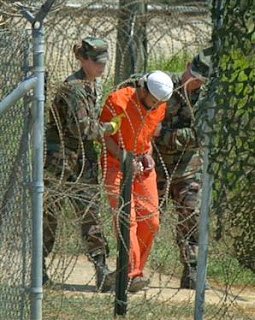 The ACLU is angry that a military judge has accepted an incendiary legal pleading filed by five 9/11 suspects, despite President Obama’s order stopping the Guantánamo military commissions and even though attorneys for some of the defendants were unaware of it.

Judge Col. Stephen Henley, the appointed chief trial judge in the case ordered the public release of the legal pleading even though all other legal filings have been kept sealed for months by the military commissions, said the American Civil Liberties Union in a release, adding that the competency of two of the men has not yet been determined.

The Smoking Gun has the released six-page legal pleading here.

“We fight you over defending Muslims, their land, their holy sites, and their religion as a whole,” reads the document.

“Judge Henley apparently doesn’t know what the word ‘halt’ means since he has blatantly defied President Obama’s executive order for an end to the military commissions,” said Anthony Romero, executive director of the ACLU in a released statement. “The judge’s actions extending the military commissions call into question the true intentions of the Pentagon leadership at a time when the Obama administration is searching for a solution to the disastrous detention policies of the Bush administration.”

Romero adds, “If Defense Secretary Gates allowed the military commissions to proceed, that’s a serious problem; if he didn’t know about this, that’s equally troubling. Moreover, to selectively release a filing that clearly serves the objectives of the prosecution when defense motions have regularly been suppressed raises the suspicion that political motivations are at play.”

The Associated Press writes that the pleading was “submitted to the Guantánamo war crimes court and released by the Pentagon, in English, over the objections of attorneys for two of the men. The five had previously said they wanted to plead guilty to the charges against them… But this is their most detailed response yet.”

The five men are charged with murder and other crimes, charges which could carry a death sentence if they are found guilty.

Of the charges, the pleading reads they “are badges of honor, which we carry with pride.”

The ACLU is calling for Secretary Gates to withdraw all charges in all pending military commission cases. They have sponsored civilian counsel for some of the five men through a partnership with the National Association of Criminal Defense Lawyers.

FOX News reporter Wendell Goler asked Gibbs if the decision by the judge to accept the legal filings was troubling, given President Obama’s order that the military commission proceedings be halted.

Gibbs responded with “No. The president — not unlike our dealings with Afghanistan and Pakistan –we’ve developed a process to review the status of those at Guantánamo Bay and determine how best to deal with individual detainees and how to bring those that committed horrible acts to justice and that continues as well.”