This is the actual 10-minute statement read by Richard Gage, AIA, to the media at the AE911Truth press conference at the National Press Club in Washington DC on September 9, 2010.

Good afternoon, my name is Richard Gage, AIA. I’m a member of the American Institute of Architects; I’ve been a licensed architect for 22 years; And I’m the founder of the non-profit organization, Architects & Engineers for 9/11 Truth (AE911Truth). 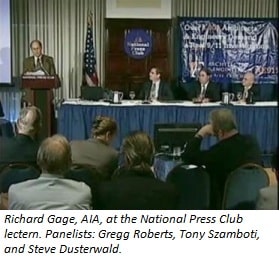 As a group, we now have more than 1,270 architect and engineer petition signers. Collectively, we have more than 25,000 years of building and technical experience. This press conference is being given by our petition signers and supporters today in 65 [it turned out to be 67] locations around the world, including 30 states and 4 countries.

Today, we’re here to inform you that we have uncovered evidence that the official investigations into what happened to the World Trade Center skyscrapers on 9/11 were deeply flawed, or worse. The scientific forensic facts we have discovered have very troubling implications. 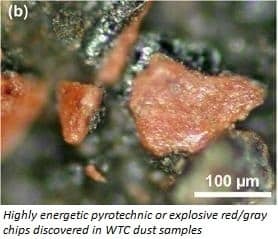 For example, a technologically advanced, highly energetic material has been discovered in World Trade Center dust from the 9/11 catastrophe.

This follows the discovery, by the United States Geological Survey and others, of high concentrations of unusual previously molten iron-rich microspheres in the WTC dust. These microspheres can only have been formed during the destruction of the World Trade Center at temperatures far higher than can be explained by the jet fuel and office fires. Those fires, we are told by engineers employed by NIST, the National Institute of Standards and Technology, were allegedly the cause of the World Trade Center’s destruction. The discovery of this advanced energetic material, in the form of red/gray chips distributed throughout the dust, both explains the iron-rich microspheres and confirms the inadequacy of the official account of what happened that tragic day.

Even before the microspheres and red/gray chips had been identified and brought to our attention, we were deeply concerned about other aspects of the destruction of these iconic buildings, and how they were investigated. More than two dozen firefighters, engineers, and other witnesses reported seeing substantial quantities of molten iron or steel, flowing like lava in the debris under all three World Trade Center high-rises. Office fires and jet fuel cannot possibly reach the temperatures necessary to liquefy iron or steel. A mixture called thermite, consisting of pulverized iron oxide and aluminum, CAN generate temperatures above 4000 degrees F — far more than is needed to melt iron or steel, which melts at about 2750 degreesF. 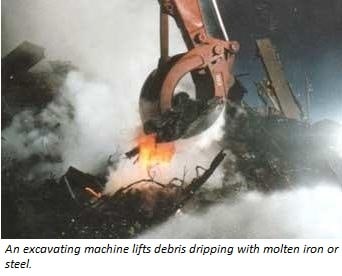 The energetic material that was found in the WTC dust by an international team of scientists (led by Niels Harrit of the University of Copenhagen in Denmark) was reported in the peer-reviewed Bentham Open Journal of Chemical Physics. It consists of nano-engineered iron oxide and aluminum particles 1000th the size of a human hair, embedded in another substance consisting of carbon, oxygen, and silicon. The sizes of the iron oxide particles are extremely uniform, and neither they nor the ultra-fine-grain aluminum platelets could possibly have been created by a natural process such as a gravitational collapse or the impact of jetliners. The red/gray chips in which these particles were found exhibit the same characteristics as advanced energetic materials developed in US national laboratories in the years leading up to 9/11. They have no reason to be in this dust. Given all the horrific costs in human lives, lost civil liberties, and trillions of tax dollars spent in response to the official account of 9/11, there can be no more urgent need than for our country and the world to find out who put those materials in the World Trade Center — and why.

This need makes it all the more disturbing that top engineers in charge of the government’s investigation would avoid dealing straightforwardly with ALL the evidence that AE911Truth and others have repeatedly brought to their attention, much of which has been available in the public record since the beginning. John Gross, NIST co-project leader, has denied the existence of — or even any reports of — molten iron or steel at the World Trade Center.

1. Both Twin Towers were completely dismembered and destroyed in just 10 to 14 seconds – which occurs at near free-fall acceleration. For this to happen, all 47 of their massive core columns as well as a large fraction of their external columns would have to be compromised with explosives beforehand.


3. Multi-ton steel perimeter wall sections were ejected laterally at 60 mph to a distance of 600 ft. That speed and distance indicates that a high-pressure explosion initiated the ejection.

4. 90,000 tons of concrete and metal decking was pulverized in mid-air, again indicating explosions.

5. World Trade Center 7, a 47-story building which was not hit by an aircraft, fell at free-fall acceleration for more than 100 feet — a significant fact that NIST’s Shyam Sunder was forced to admit after being presented with our research. Yet NIST has failed to review or acknowledge the obvious implications of this fact, which is that the columns must have been explosively severed within fractions of a second of each other.

6. The complete destruction and dismemberment of Building 7, collapsing in just 6-1/2 seconds–which is near freefall acceleration–through the path of what was greatest resistance, symmetrically vertical, including 2-1/2 seconds of pure free-fall (zero resistance), is an occurrence only possible with expertly-placed explosives.

There are other falsehoods and omissions in NIST’s official report:

1. NIST overstated the severity and duration of the fires in all three skyscrapers, apparently in order to more credibly attribute the destruction to the fires, yet without exaggerating them enough to account for molten iron or steel.

2. NIST and FEMA did not follow the National Fire Protection Association’s standard procedures for fire and explosion investigations and test building debris for explosive residues.

3. NIST did not test for explosives when explosive demolition was the most likely hypothesis.

4. NIST’s animated computer model of Building 7’s destruction, showing the outer walls crumpling inward like a piece of foil, bears no resemblance to the actual collapse as seen in the videos.

5. NIST claims that the falling section of each of the Twin Towers, above the jetliner impact zones, crushed the much larger and more massive intact lower section. But [in the case of the North tower,] video analysis reveals clearly that the upper [section] disintegrated in waves of explosions prior to any crushing of the lower [section]. This indicates that the top sections could not have been the cause of the destruction of the lower [section].

6. NIST’s technical analysis into the twin towers’ collapses stops at the “initiation of collapse.” There is no technical analysis of the structural behavior of the building during the collapse itself. In response to our Request for Correction on this matter, NIST acknowledged that they were “unable to provide a full explanation of the total collapse.”

In short, NIST’s official technical explanation is fraudulent and inconsistent with the basic laws of physics. By contrast, the hypothesis of controlled demolition is consistent with all of the available technical evidence.

This week, here in Washington, DC, we personally delivered our DVD “9/11: Blueprint for Truth — The SF Press Conference Edition,” which included highlights of the forensic evidence, into the hands of staffers for the science advisors of every elected representative on Capitol Hill. In addition, we have sat down with over a dozen of them and presented in detail the overwhelming evidence of explosive controlled demolition. We have personally invited over 400 of them to today’s event. How many Congressional science advisors are here today? [None].

I urge you to go to our website AE911Truth.org for more information, including comments by our members on the problems with the official investigation. At this point, we are calling for Attorney General Eric Holder to ask a federal grand jury to investigate those responsible for the NIST report, including Lead Investigator Shyam Sunder and Co-Project Leader John Gross.

We’d like any and all reporters who will be covering this story to know that Architects & Engineers for 9/11 Truth are here to give you any technical support you need.

Finally, I’d like to thank the thousands of scientists, senior level members of the military, intelligence and other government officials, pilots and aviation professionals, firefighters, scholars and university professionals, 9/11 survivors and their family members and concerned citizens here and around the world for their continuing support.

We also want to thank our growing family of more than three hundred sustaining financial supporters. We could not do this without you.

Now, I will answer any quick questions you may have. Keep in mind that most of your questions will probably be answered during the Mock Debate — which will be starting in just a minute. Also, more detailed information is available in our DVD, 9/11: Blueprint for Truth — The Architecture of Destruction, which is available on our website AE911Truth.org.