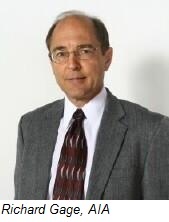 A highly anticipated debate between two members of Architects & Engineers for 9/11 Truth and two physicists is scheduled for August 21, 2010. The debate will air on the popular late night talk show Coast to Coast AM with host Ian Punnett between 10pm – 2am Pacific time.

Richard Gage, AIA, founder of Architects and Engineers for 9-11 Truth and an architect for over twenty years, has delivered over 150 presentations in 17 countries, including Canada, Europe, Australia, New Zealand, Japan and throughout the United States. He will be joined by Danish scientist, Niels Harrit, Associate Professor at the University of Copenhagen — a chemist and university teacher with expertise in organic chemistry, photochemistry, fluorescence, and nanotechnology.

Harrit co-authored a peer-reviewed paper along with Dr. Steven Jones and several others, documenting their discovery of a highly energetic, nano-engineered form of thermite in World Trade Center dust. In its ordinary form, thermite, a mixture of iron oxide and aluminum powder, burns extremely hot — around 4500° F. — sufficiently hot to melt iron, which melts at around 2700° F.

Gage and Harrit will present evidence that the three World Trade Center skyscrapers were explosively demolished on September 11, 2001.

“We hope that this milestone debate at this prestigious venue will give us an opportunity to lay out the explosive evidence that has alarmed over 1,000 technical and building professionals into demanding a new WTC investigation,” Gage told The Examiner.

Harrit, writing from Copenhagen, said of the upcoming debate, “I wish to express my appreciation of the participation of Dave Thomas and Kim Johnson. Their appearance on Coast to Coast should be hailed as unique. This is, to the best of my knowledge, the first time in the mainstream press that someone has volunteered to defend the official, technical version of the September 11th, 2001 attack on New York. On some occasions I have been invited to participate in similar radio and TV discussions in Denmark and France, but each time it was cancelled due to the lack of a defender of the official reports. I am looking forward to learn from Thomas and Johnson how the official version is compatible with experience, observations and data,” Harrit said. 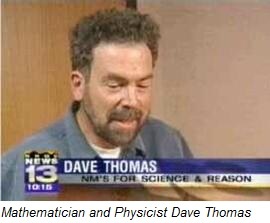 Challenging Gage and Harrit’s contention that explosives were responsible for the buildings’ destruction will be mathematician and physicist Dave Thomas from a group called New Mexicans for Science and Reason (NMSR).

Thomas, a Fellow of the Committee for Skeptical Inquiry, publisher of Skeptical Inquirer magazine, will be joined by his associate, industrial physicist Kim Johnson, also on the Board of NMSR and past president of the New Mexico Academy of Science.

Thomas and Johnson told the Examiner, “The events of 9/11 were unlike anything ever seen before. 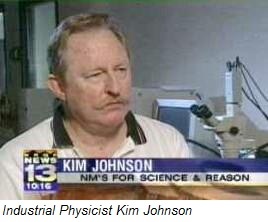 We plan on describing, as clearly and straightforwardly as possible, how fires from the hijacked planes made the Twin Towers collapse so catastrophically and quickly. We’ll also explain why other buildings, such as WTC 7, also collapsed that day. And finally, we’ll be pointing out the absurdities and inanities of ‘9/11 truth’ physics and chemistry throughout the evening.”

This will be the second time Gage and Thomas have publicly discussed the destruction of the Trade Center towers.

On October 24, 2009, an abbreviated debate took place between them at the New Mexico Institute of Mining and Technology in Socorro, New Mexico.

This September, the most important print item in the history of AE911Truth will make its debut. The “911 Investigator,” the first annual edition of our informative new color broadsheet newspaper, is now available for early order in our online store, and you’ll be able to get 100 copies shipped at low bulk prices and distribute them proudly in your local community.